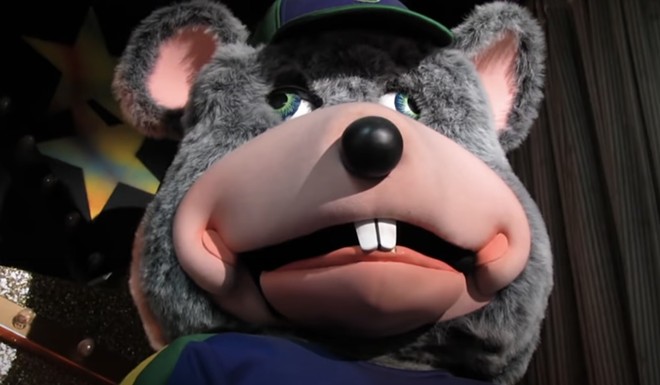 Why is it that so many children's stories are synonymous with suffering? We're talking lots of dead dogs, dying trees, a dead spider, and one existentially doomed stuffed rabbit. But perhaps no story is as tragic as that of orphaned rat-turned-entrepreneur Chuck E. Cheese — who recently launched a new premium pizza brand so that he and his animatronic pizza party peddlers (and bandmates) could weather the coronavirus pandemic.

In a statement to Food & Wine, a Chuck E. Cheese spokesperson confirmed that the company had branched into food delivery, and said that though Pasqually's Pizza & Wings is a product of CEC Entertainment, the pizza is considered a “premium” offering when compared to that of the traditional Chuck E. Cheese pie:

Orlando Weekly confirmed that Central Florida Pasqually's and Chuck E. Cheese locations are identical online. (And no, they don't have vegan options.)

Screenshot via Pasqually's Pizza Wings/Grubhub
So, who is Pasqually? According to Chuck E. Cheese lore (and this curiously dark and illustrated and possibly unauthorized origin story), Pasqually is the reason Chuck E. Cheese franchises offer pizza at all. That story leaves out Chuck's time as a cynical, adult joke-telling cigar-smoking mascot before leaning into his tragic childhood tale. He's also kind of a loose cannon and will likely prove to be a liability as he gets older and handsier, but whatever.

Pasqually P. Pieplate, an Italian immigrant, is a chef and drummer of Munch's Make-Believe Band. As an adult, he inherited his family's restaurant where he paired his traditional Italian fare with his lukewarm standup comedy routine, which did not go well. Apparently, customers found his jokes to be inappropriate and business began to tank. Pasqually and his nephew Gino faced a harsh reality: they were going to have to shut the place down.

Pasqually P. Pieplate, a fictional Italian immigrant, is a chef and drummer of Munch's Make-Believe Band.

Those plans were dashed when Pasqually discovered an unwelcome rodent who had been residing in his restaurant. It was none other than Chuck E. Cheese, a fucking singing mouse and the answer to Pasqually's business woes. OK, well not quite: Pasqually's dumped the family name in favor of Chuck E. Cheese's, where he basically forced the singing rat to perform like he was Judy Garland or something. Being an orphan with little to no social skills, not to mention unresolved childhood trauma, Chuck E. was unable to perform under such intense pressure. People fucking hated him. Without the gift of song, Chuck E. was just a rat in a T-shirt.

It wasn't until Chuck E. saw a child (no, we're not kidding) leaving the restaurant wearing a birthday crown that he decided to sing his favorite song to the boy, who appeared sad as fuck that his parents dragged him out to degrade a small animal. Chuck E. Cheese's favorite song is, of course, “Happy Birthday,” because according to his origin story, he always wanted a birthday but never got one.

However, more tragic than the orphaned mouse living out his unfulfilled childhood dreams of having a birthday (his birth certificate has apparently been "lost to the sands of time") is the restaurant chain's struggle to survive. From live stream sing-a-longs and sad grabs at relevancy on Twitter, Chuck E. Cheese, now 43 years old, is struggling to keep his beloved chain afloat.

In the first quarter, the chain saw sales take a 21 percent dive due to coronavirus. But things weren't necessarily smooth sailing before the pandemic, either. In 2012, the chain rebranded Chuck E. as a “rock star mouse,” as they were under the belief that business was sluggish because its mascot was an animatronic rat. However, the makeover wasn't enough and the company was purchased by a private-equity firm for close to $1 billion dollars — not tokens. Oh, and in 2017, the company began phasing out animatronic band characters and band performances at its restaurants because apparently god is dead.

So, whether you choose to take a gamble on some premium pizza from a chain you've never heard of or consciously order from Pasqually's Pizza and Wings knowing damn well that it's just a sauced up version of Chuck E. Cheese's cardboard pie, you can rest easy knowing you're supporting a nightmare 43 years in the making.

This story originally appeared in our sister paper the Detroit Metro Times.
_
Please follow CDC guidelines and Orange County advisories to stay safe, and please support this free publication. Our small but mighty team is working tirelessly to bring you news on how coronavirus is affecting Central Florida. Please consider making a one-time or monthly donation. Every little bit helps.