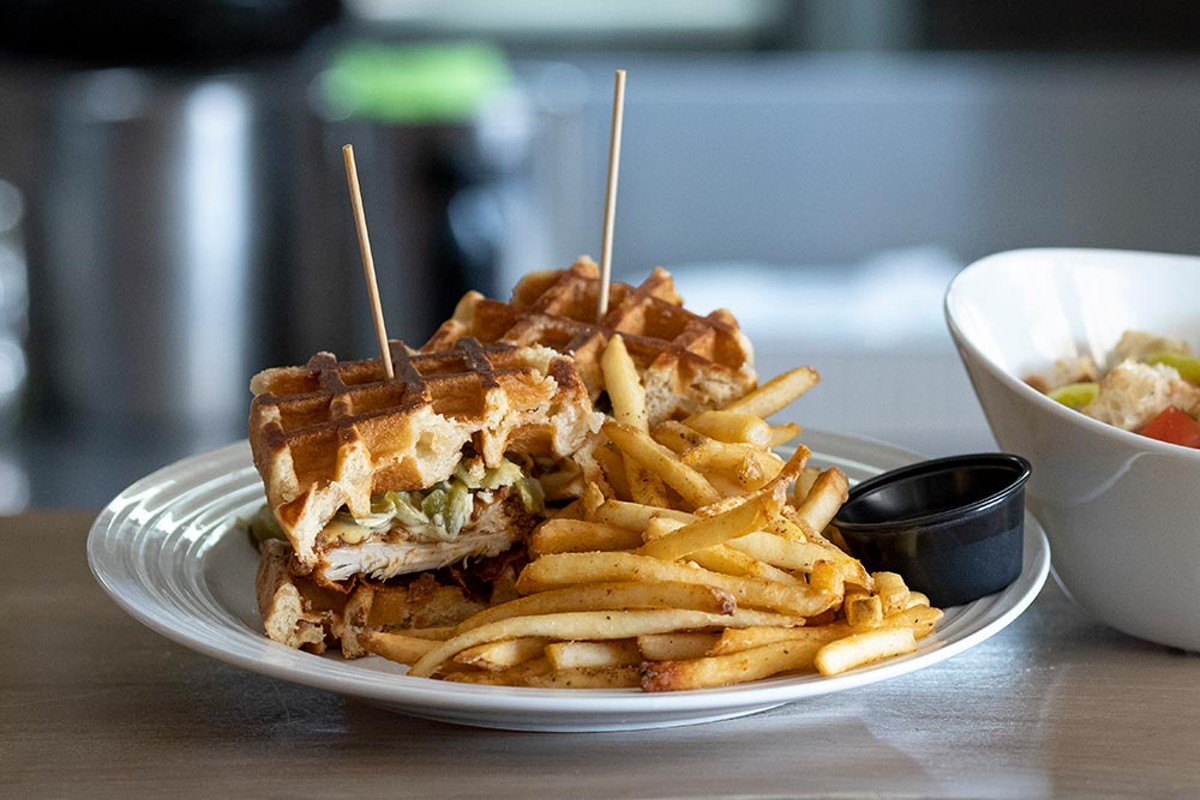 When I last saw A.J. Haines, it was two years ago at his Thornton Park restaurant Mason Jar Provisions. He was making me the Dave Dog — a hoagie bursting at its bready seams with boneless short rib, slapped with pickled onions and dill pickles. The sandwich was a tribute to his father, a touching and tasty homage that came to mind as I scanned the menu inside the Hen & Hog.

Haines opened this chamber of comforts in September, soon after having been forced to shutter Mason Jar Provisions in June. It's a larger space styled in all things farmhouse, right down to a hen-red color palette à la the Coop. But unlike its deep-pocketed Winter Park neighbor, H&H has a Le Cordon Bleu grad manning the kitchen, a grad who made the grade in kitchens all over the city — Wolfie's Pizzamia, Luma, Cask & Larder, Prato, Via Napoli, The Parkview. Indeed, Haines' classical training and experience shows in dishes that not only look good but comprise all those homey Southern feels. Just wait 'til he gets his Haines on you.

On one late morning visit, I laid into a chicken and waffle sandwich ($13) and wondered why the dining room was so empty. "I'm not doing any advertising," Haines told me as I chomped away on the fried chicken thigh coated with a honey mustard sauce and pickled jalapeños in between waffle buns. "It's just word of mouth right now, so leave me a review!"

Oh, I will! I said to myself, but what came out of my mouth as I ate this sandwich weren't words so much as grunts and moans and oinks. Clearly, they weren't loud enough.

When I popped in a couple of weeks later, the room was hardly full, but the food I enjoyed with a couple of pals was just as great as the first go-'round.

The namesake "hen and hog" ($15) was a particular favorite, with its shredded chicken and pulled pork on toasted ciabatta. It looked remarkably plain sitting on that metal tray sided with seasoned fries, but the handheld dressed with Italian vinaigrette, muenster cheese and Southern chow-chow (for a little twang) was anything but.

One of my dining comrades enjoyed it with iced tea ($4), which she proclaimed was "just as good as McDonald's, and McDonald's makes the best iced tea."

"Those fries are good too, but they're not McDonald's good," I said as my gaze moved toward a plate of fried pickles ($11) served with Cajun aioli. They proved addictive and vanished in mere seconds: "Those are definitely better than McDonald's!"

Speaking of McDonald's, the burgers here are ground in-house from chuck, brisket and short rib and, for the luxe factor, a little extra brisket fat. The burgers are smashed and smashing, the mushroom Swiss ($14) burger in particular. Butter-braised mushrooms, fried onions, brioche bun ... what's not to like? We got a bit hen-pecked and ordered garlic-parmesan wings ($15), thinking they'd be served with a goopy sauce. Instead, we got actual chopped garlic blended with cheese, and it made all the difference. Haines offers a hot chicken sandwich ($14) of worth as well, but with Jam Hot Chicken so close by, I'm likely going there if a craving hits.

Brunch is served Saturdays and Sundays from 11 a.m. to 3 p.m., not that I care all too much. I'm not a bruncher, nor am I fan of the performative so-called meal. But if there's one item off the brunch menu whose virtues I'm happy to extol, it's the cinnamon-roll bread pudding ($15). It's sweetened with maple syrup (genuine, of course), whipped cream and candied pecans and served with a side of banana mash. We ordered it two minutes before the 3 o'clock cut-off but, fortunately for us, Haines was happy to oblige.

Too close for comfort? Nah, never at the Hen & Hog.