I'd been itching to drive out to Dali's in Sanford ever since they posted a pic of their khao poon – the Laotian coconut curried soup of rice noodles and shredded chicken – on Instagram. So I texted my baller friend, who's also Laotian, and made the journey to Sanford in his Brabus Mercedes G63 AMG, the sounds of Yella Beezy and Gucci Mane boom-bapping the chests of startled passers-by in the restaurant's parking lot off Rinehart Road. Dali's opened 20 minutes before we pulled up like gangstas and every table, all six of them, was already taken. We took off our sunglasses and let out a synchronized Damn!

Behind the counter, owner Darivone "Dar" Manikhong scurried about organizing plates and running them out to eager patrons. Behind her, in the sizable kitchen, were Dar's husband, Khanthi, and her 74-year-old father, La, prepping and cooking the recipes of Dar's mom, Damdy, the undeniable 67-year-old #bosslady of this operation. Her benevolent leadership and exacting approach to cooking has lent Dali's its much-warranted hype. Proof of Damdy's dedication: She once drove two hours to the Gulf Coast just to procure orange Thai peppers. Respect.

Further proof: She helped open Thai Cuisine on Edgewater Drive back in 1993, and she volunteers to cook for the Buddhist monks at the Lao temple in Sanford. Her reputation precedes her. She's a consigliere to Laotian and Thai restaurateurs in the city. They all know her, and many have sought her advice.

But her husband's no pushover – La's the one responsible for soup broths, marinades and chili pastes. It was his jaew bong that Sticky Rice used after opening in Colonialtown, and it was that pungent chili paste that ignited a four-alarm blaze in our traps at Dali's that no amount of lemongrass-scented sausage ($12.95), air-dried beef jerky ($12.95) or sticky rice could smother. Less fiery and more funky was the papaya salad ($8.95) we ordered in the Lao (not the sweeter Thai) style with its fish sauce, fermented anchovy paste and wee bits of Thai eggplant.

"This is legit," said my Lao pal. "It's like I'm eating at my mom's house." But before hopping back into his G-wagon and cranking Future's "Life Is Good (feat. Drake)," he had his mind set on one more dish – lad na ($12.95). Popularized by the Chinese living in Laos, Dali's version deserves superlatives not for the flat, chewy rice noodles, plump shrimp or gorgeously scored and curled squid, but for the gravy, which Dar says her mother makes using "oyster sauce and magic."

Lad na translates to "pour on the face" and while we stopped short of doing just that, my Laotian comrade did concede it was the best lad na he's had. Ever. No small words from a man who's traveled the world and knows his way around a kitchen, and then some. 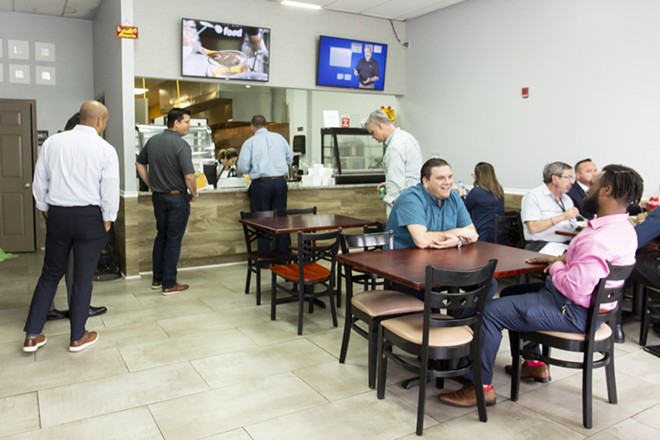 When the laab ($12.95) arrived, it was declared the best in all Orlando, and I have to say the claim was justified. The plate of room-temperature minced beef soaked in lime juice and blended with scallions, cilantro and mint is a dish worthy of being eaten many times over. Oh, and those orange Thai hots made an appearance too, along with more sticky rice. Now, should you opt for familiarity – say, in the perfectly balanced pad thai ($12.95), for example – just know that it, too, may transcend any versions you previously held in high regard. The bounce in the pad thai's noodles was as laudable as the ratio of sour to sweet. And the dish that spawned this trip – khao poon ($11.95) – was just, well, wow. I had to finish it over a span of a couple of days, but the milky broth was every bit as resplendent at home as it was at the restaurant.

Music muted, we spoke of our experience at Dali's on the long drive back; of how the restaurant's name is a reference to Darivone (the "r" is pronounced as an "l" in Laotian); of how Dar and her family were just the sweetest people; and of the food, the incredible food. And those thoughts lingered. Dali's persistence of memory? Let me tell you, it's no dream.


–This story appears in the Feb. 12, 2020, print issue of Orlando Weekly. Find out the latest dining news every Friday morning with our weekly Food + Drink newsletter.