Sticking around Café Linger is a given; coming back is a must 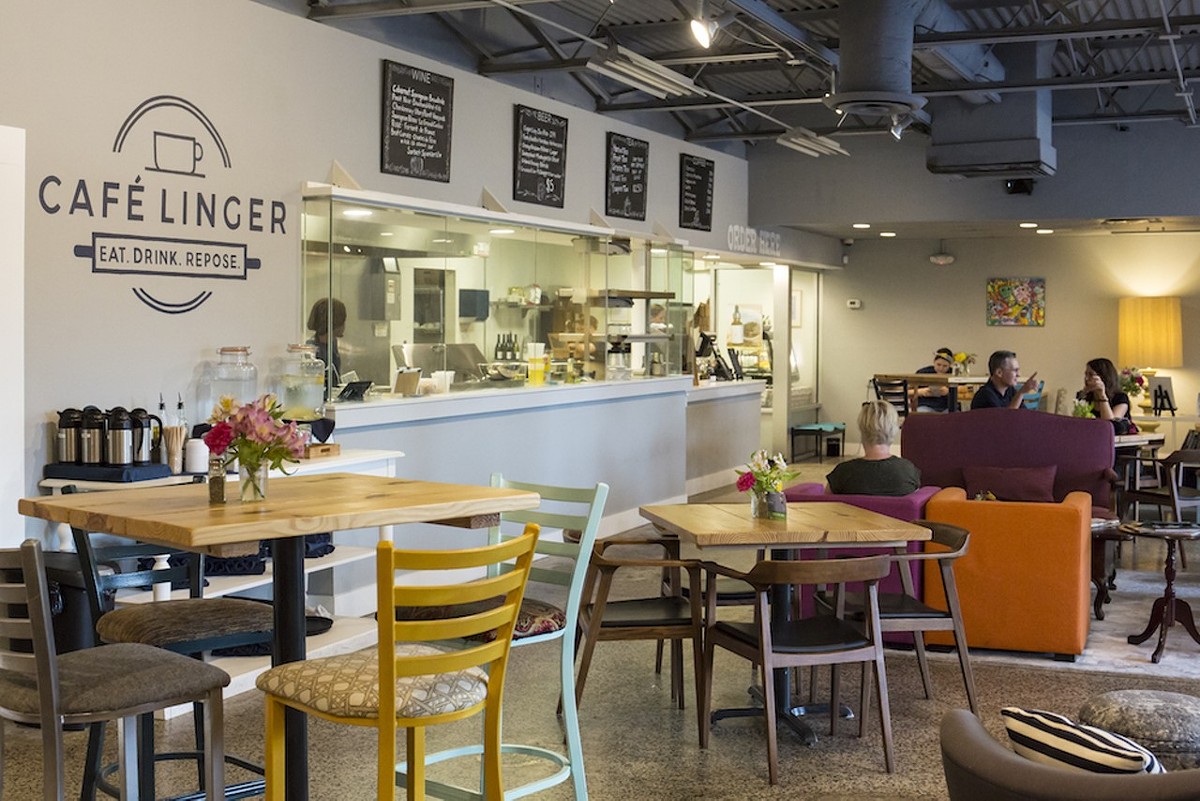 When a couple of Johnson & Wales grads open a café, you can bet croissants and cappuccinos won't be all they serve. Far from it, in fact. Michael Brito and Christina Gribkowsky, the affable proprietors of College Park's Café Linger, are a couple of serious culinarians bent on redefining coffee culture on Edgewater Drive. Pan-seared snapper over quinoa and kale with a drizzle of basil-citrus cream sauce? You don't say! Grilled octopus over fondant potatoes slicked in a sauce velouté? You must be joking. Smoked salmon and avocado tartare? Well, allow me to put my feet up and stay awhile.

Not so fast. There are rules to abide by at Café Linger, the first of which is "Shoes off the furniture and keep them on your feet." Not a problem. I'll keep my tootsies on the ground while the kitchen, helmed by executive chef Alexander Diaz and chef Angel Vergara, reaches for the stars because stellar is the fare. Diaz, by the way, is the former chef de cuisine at Cuisiniers and grillmaster at the long-closed Txokos, while Vergara is coming off a stint as chef de cuisine at Farm & Haus. Prior to that, the CIA graduate was lead cook at Txokos, so no surprise that a tortilla española ($7) is offered. It certainly isn't lacking in height, but if there was any advertised ham cooked into this potato-stratified Spanish omelet, we could neither see nor taste it – not that it affected the tortilla's splendor any. Dips into the garlic aioli only enhanced it.

There's a technical proficiency to everything we've sampled here in our many visits that gives us the sense that Café Linger will cook what it wants and serve what it wants, and won't pander to anyone or anything less. The ninth rule by which to abide at Café Linger reads, "The owners have enough attitude for all of us. Sadly, there is no room for yours." If they keep busting out dishes like the gorgeous round of smoked salmon and avocado tartare ($11) or a delicately crisp branzino ($10) laid over arugula and rosemary potatoes anointed with a refined beurre blanc with lemon juice, you won't get any 'tude from me (even if those potatoes could do with a little less roasting – they were a smidge wrinkly).

Of the café's more populist items, the three little lamb sliders ($12) were bleatin' good and bite-sized cod fritters ($7) were heartily downed (with dips into that lovely garlic aioli). A common plate of chicken and waffles ($11) is given a somewhat uncommon side-stacked presentation, but more importantly, there's a balanced seasoning to the battered chicken, and the waffles are right fluffy. What sets it apart is a saucy swirl of béchamel and maple syrup dotted with crunchy caramel – rich, but not cloying or heavy.

For that matter, neither are desserts. The incredibly light, crisp-shelled honey cannoli ($6) piped with fresh mascarpone is an ending I'd order time and again. The cannoli is accompanied by proper whipped cream, vanilla bean ice cream, fresh berries and a strawberry-balsamic "stew" for a wet finish. Smaller stomachs should down the mini strawberry pudding ($2) with little effort. And portions are perfect – "European-sized" was the term of old – so you won't feel like a stuffed banana on exiting. When you do, you'll no doubt notice the homey effects from your average domicile – bookcases, rugs, sofas, even a rocking horse, a teddy bear and a piano – which lend to café's welcoming, stay-for-a-while aspect. No doubt when I'm in College Park, Café Linger is my home away from home.