Sand Lake Road McDonalds to get new location and makeover, say goodbye to the chaos 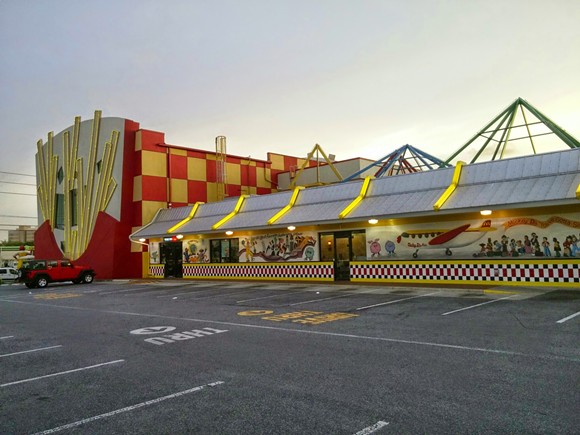 Photo by Ken Storey
Just about everyone in Orlando is familiar with the famous ‘entertainment McDonald’s’ on the corner of I-Drive and Sand Lake Road. The massive McDonald’s has a huge 3-story box of French fries on the side of it and plenty of tacky, tourist draw. Well, after decades of remodeling, add-ons and upgrades the out-of-date building is about to see its last Big Mac.

The McDonald’s Corporation purchased the former gas station next door in December, 2012. A new, even larger McDonald’s is now planned for that location. After a few years of negotiations it now looks like the current franchisee, Oerther Foods, will operate the new McDonald’s. The land, however, is still owned by McDonald’s Corporate.

Official renderings have been released that seem to show the new location will be 3-stories tall with a large playplace overlooking Sand Lake Road. The rendering released is not the final design, which will likely include a direct connection to the elevated pedestrian walkway that is being planned out front. The new location will feature many improved tourist experiences including large fish tanks and an arcade. Other possible oddities that we’ve been told it might feature include a small Ferris wheel and a small kiddie train ride similar to the one at Downtown Disney. The renderings released do not feature the Ferris wheel, so don’t hold your breath on that one.

The original plans did call for the new McDonald’s to be much larger than the official renderings show. At one point there were also rumors of combing the pre-existing building to the new one (in these plans the new building was five-stories tall) which would make this McDonald’s the world’s largest (right now the world’s largest is in Oklahoma). At just under 19,000 sq ft the Sand Lake Road McDonalds will be roughly 11,000 sq. ft. smaller than the one in Oklahoma.

The current ‘entertainment McDonald’s’ is believed to be the most photographed McDonald’s in the world. What started as a normal McDonald’s has evolved over the years into a strange wonderland of fast-food. This location is the last hold-out of the once popular Bistro Gourmet menu that brought Panini sandwiches, pasta and even pizza to the otherwise typical McDonald’s menu. It also features a jungle-themed waterfall and a 2-lane bowling alley.

Gone will be the random decorations and the chaotic mishmash of themes. Employees speaking off the record ensured us the Bistro Gourmet menu will be staying. At one point there were even plans for a sit-down micro restaurant within the larger McDonald’s, though again the newest plans seem not include that.