Orlando's Morimoto Asia got a bottle of Yamazaki 55, the Japanese whisky that sells for $950,000, and we got to taste it

Beam Suntory
The House of Suntory, the legendary Japanese whisky distiller, has released the Yamazaki 55 — their oldest-ever single malt whisky — and Morimoto Asia got its hands on one of the very few (well under 100) bottles that made it to the United States.

I had the honor of tasting the Yamazaki 55 at a dinner hosted by Gardner Dunn, brand ambassador at Beam Suntory, and Morimoto Asia executive chef Yuhi Fujinaga, earlier this week to showcase Suntory's star quaff as well as a lineup of Suntory's 12-, 18- and 25-year-old aged whiskys.

Fujinaga's dishes were stunning (check out the menu below) with gorgeous presentations of A5 wagyu tartare, Peking duck, otoro and akamutsu (blackthroat sea perch), as well as Japanese catch like managatsuo (silver pomfret) and kinki (thornyhead fish). 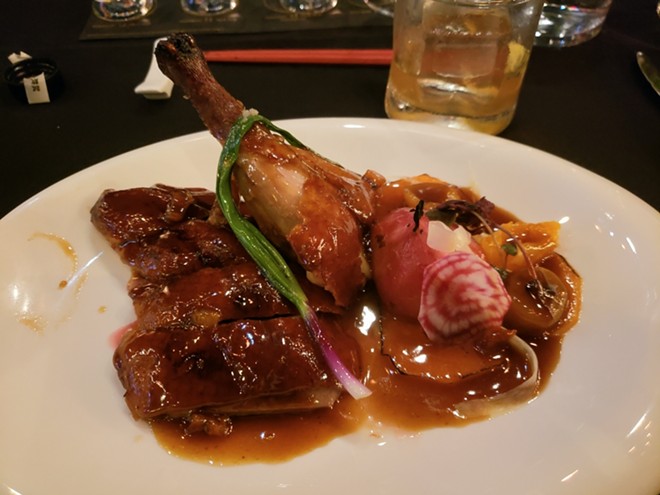 Faiyaz Kara
Peking duck a la satsuma, persimmons, cherries, yuzu marmalade
As exceptional as Fujinaga's dishes were, the Yamazaki 55 was the main attraction, and what a beaut it is. The deep-amber spirit — a blend of rare single malts — is comprised of whisky distilled in 1960 from Japanese oak (mizunara) casks by Suntory founder Shinjiro Torii, and single malts aged in American white oak in 1961 and 1964 by Suntory's second master blender, Keizo Saji. Faiyaz Kara
Yamazaki 55
The result? Well, judging from the stunned faces, rolling eyes, and cries of "Holy $hit!" around the table, euphoric. This was midcentury Japan in your mouth. Not so much Godzilla as Kyu Sakamoto. Its intoxicating aroma of sandalwood incense; the velvety smooth feel; the woodsy notes; and a finish reminiscent of coconut had everyone cooing like a bunch of love-drunk pigeons.

And rightfully so. Not only is the 55 meticulously crafted, but a bottle (if you can find one) retails for $60,000. 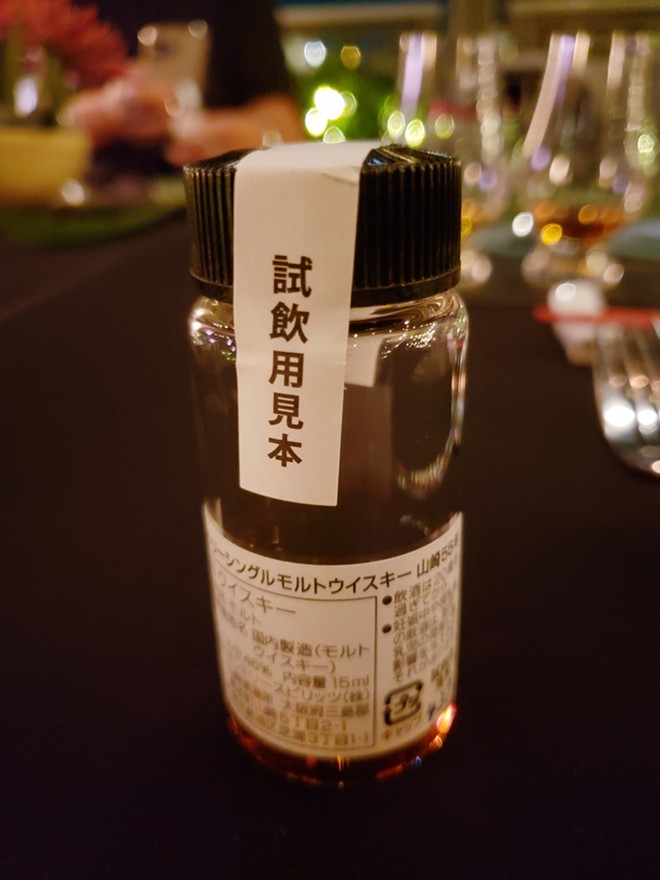 Faiyaz Kara
A 15ml (0.5 oz) sample of Yamazaki 55
Suntory unveiled the 55-year-old whisky last year with a 100-bottle release into the Japanese market. A lottery system was set up to determine who could purchase a bottle for ¥3 million, or $27,000. This year, they've released an additional 100 bottles to select global markets, including the United States, with a suggested retail price of $60,000.

On the secondary market, however, prices have soared because of their scarcity. Bottles have been auctioned off at $775,000 and $800,000, while online retailers are selling the bottle for much as $950,000.

The $60,000 price set by Suntory is meant to be a fair and honorable one so, needless to say, profiteering retailers and auction houses will likely never receive any releases from Suntory again. Faiyaz Kara
Chef Yuhi Fujinaga's menu for the Yamazaki 55 dinner
Should you wish to sample a wee dram (or four) at Morimoto Asia, a half-ounce pour will run you $2,000. Might make a great holiday gift for the person in your life who's into experiences, not things.

Or, you could treat them to an omakase that the Iron Chef himself will preside over on Dec. 4. Yes, chef Morimoto will serve a multicourse omakase along with the 12-, 18-, 25- and 55-year-old whiskys.

It'll be a rarefied event, as only 14 seats are being made available. And the cost? A very 1-percenty $5,055 per person. Kanpai!