Whiskey comes into the mainstream in Orlando’s craft cocktail bars

Show us the way to the next whiskey bar 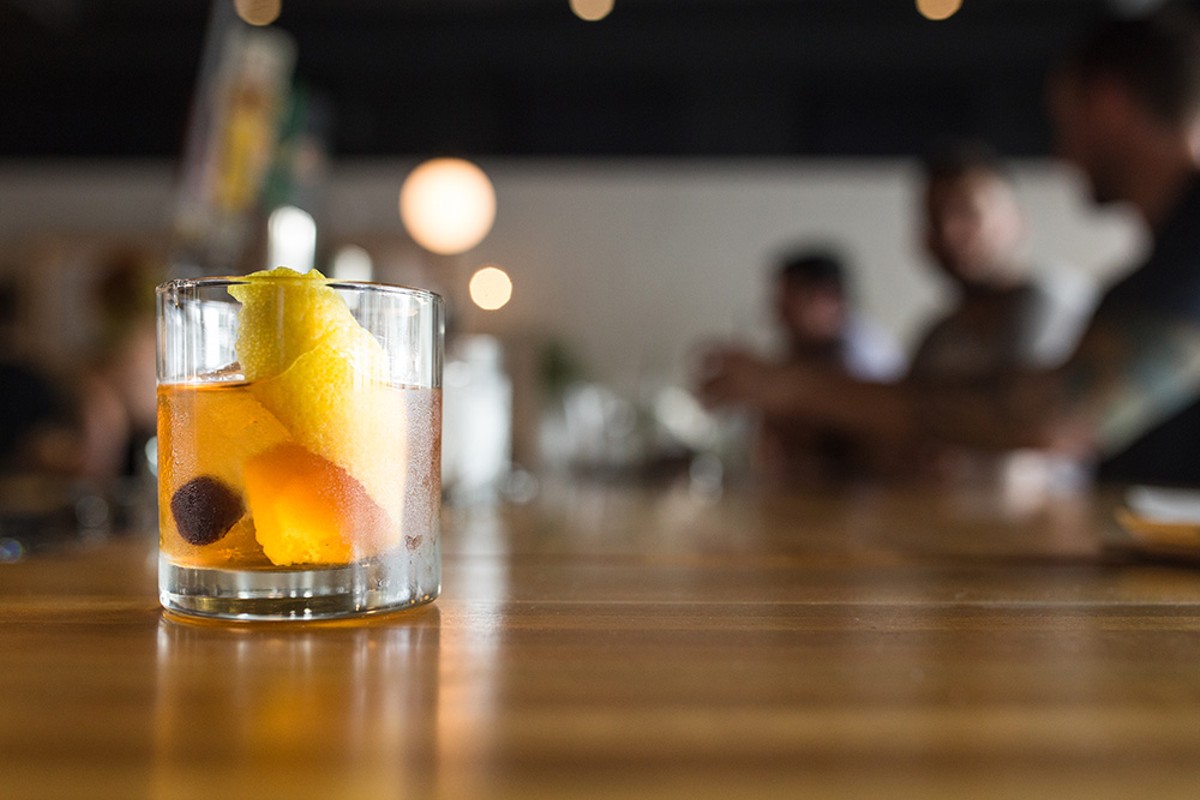 An Old-Fashioned at the Guesthouse Photo by David Lawrence

A silver-haired gent in a denim smock serves my shot of Old Forester next to a short glass of Cask & Larder's Red Drum Amber Ale. He's set them on a small paddle that resembles a tiny pizza peel. This two-headed confection is called a "shot and a wash," a standby from saloons and dive bars of old – where whiskey cut its teeth as the American spirit. For the first time since my college freshman days, I have to ask: "How do I drink this?"

"However you want, really," he responds. "Some people mix them boilermaker-style, others shoot the Old Forester and then down the 'wash,' but I prefer to just sip both and enjoy." I throw the shot back – smoke, earth and cherry butane hitting me in the tongue and belly like a foreign language – and wash it down with the ale. After hanging out for a few more minutes, I'm ready: Show me the way to the next whiskey bar.

Similar to the mid-2000s craft beer boom, craft cocktails – and, by association, whiskey – have enjoyed a renaissance in the early 2010s. Fortune magazine reports that whiskey sales nationwide have increased 40 percent over the last five years, generating billions in revenue. Whiskey's always been steeped in American culture, but while Orlando mainstays like Wally's and Whiskey Lou's have served the hard stuff for decades, world-class destinations like Orange Avenue's Ravenous Pig have put a blazer on it.

I stop by the Pig, a short walk from Cask & Larder, after my shot-and-wash. Today's happy hour cocktail is the luxuriant "Romance Revival" – a blend of Rittenhouse rye, Cappelletti aperitif, hopped grenadine, lemon zest and fizzy cava. Oranges sit half-scalped in bowls on the Pig's stone bar top, and a well-stocked whiskey cabinet looms over the lounge like an elder statesman.

Bar manager Kristian Sirani produces an apple-sized ice cube from a bin beneath the counter. It's perfectly hewn, dense and translucent. Every Wednesday the Ravenous Pig receives ice shipments in 1,200-pound blocks, which Sirani hacks into smaller, chop-worthy chunks with a chain saw. These cubes chill the Pig's exquisite craft whiskey cocktails, some of the best here or anywhere.

Florida's craft beer scene was slow catching fire but came on strong late, hosting excellent breweries (like Cigar City Brewing) and elite craft beer bars (like Redlight Redlight). With some notable exceptions, like St. Augustine Distillery up north and Orlando's own Winter Park Distilling and JLA Distillery, Florida's craft whiskey production has followed a similar trajectory. That hasn't stopped intrepid entrepreneurs and mixologists from offering some of the best whiskey drinks and bars in the state – from the diviest dives to the upper-crustiest mixology bars, and everything in between. The Guesthouse's Terrie Bourgeois believes that middle ground is where Orlando's whiskey culture's headed and where it will thrive.

Forged by the owners of the beloved Bar-BQ-Bar, Ashley Dishman and Hurst Marshall, the Guesthouse is, as Jim Morrison famously sang in 1967, the next whiskey bar. Unlike the Ravenous Pig, the Courtesy, Hanson's Shoe Repair and other Orlando standouts, the Guesthouse is spacious, open. This bar wants to give customers breathing room – and room to mingle – while they sip their drinks.

"Everything here, from the way the bar's designed to the number of windows and the potted plants, is meant to make people feel at home," Bourgeois says.

The Guesthouse isn't about exclusivity or eye-rolling panache – although there's certainly a time and place for both. Bourgeois and company want to bring people in, preferably around a great bottle of rye.

"We pride ourselves on being a laid-back place that serves the best drinks we can," Bourgeois says. "People come in every day who'd never liked whiskey, and they'll try a cocktail or a bourbon and leave with a whole new perspective on it."

It's the same community-building I've seen while covering Orlando's craft beer beat, where bars like World of Beer and the Brass Tap have delivered IPAs and Belgian white ales to the mainstream.

"I think people are realizing it isn't their grandpa's drink anymore," Bourgeois says. "Whiskey can be masculine, but it can also be sweet and refined. It's inherently American, but it's also cosmopolitan. It can be however you want it to be."

That's something to raise a glass to.