Local restaurant group does it again; Nick's brings a new level of cool to old-school Italian 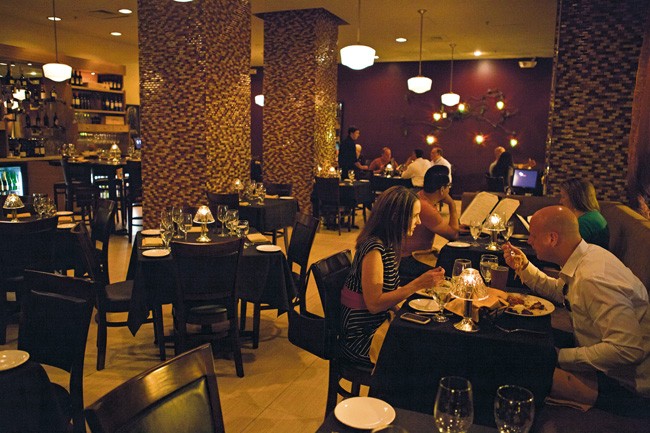 I'll admit it. I had my doubts about the Funky Monkey empire's success. Five new FMI Restaurant Group ventures – Bananas, a second Funky Monkey on I-Drive, the Vault, Prickly Pear and Nick's Italian Kitchen – open within months of each other? “They're getting too big for their britches,” I kept saying. But my recent meal at Nick's Italian Kitchen has shut my mouth for good, and replaced trash talk with praise for the way they're bringing a new level of cool to old-school Italian dishes.

Nick's is so chic, in fact – the lighting so low, the decor so understated – that once you step inside, you might mistake the place for a New York hot spot (that is, if it weren't for all the space to breathe). Soft techno beats in the background give the impression of a Miami Beach fashion show; you can almost see the models catwalking down the runway. Not really the kind of vibe you get from some other pasta slingers around town.

We started, as is traditional, with antipasto ($12) and beef carpaccio ($12). The antipasto was quite beautifully arranged, with a mountain of thickly-cut prosciutto, house-made mozzarella, olives, hunks of Parmigiano-Reggiano, artichoke hearts, roasted red peppers and sweet blackberries that hinted at the summer months on their way. And the carpaccio, paper-thin slices of beef sprinkled with capers and piled with fresh arugula, shaved Parm-Regg, and drizzled with a judicious amount of truffle oil, is a dish to return for again and again.

My dinner companion, who believes that a good steak is the mark of a good restaurant, ordered the rib-eye ($28) as his entrée. Our server – who had the confident gait and clip of a long restaurant career and a personality that made us want to invite him out for drinks after dinner – suggested it “Marsala-style,” with the classic wine sauce and mushrooms. Good choice; the well-balanced sauce elevated the mid-rare steak into a work of art. Sides of rosemary new potatoes and al dente asparagus rounded out the plate.

I was disappointed that Nick's doesn't make its own pasta, so I chose the eggplant rollatini ($18) with a side of “Nick's grandmother's famous meatballs” ($8). The rolls of eggplant filled with ricotta were forgettable; the homemade tomato sauce and the melted house-made mozzarella were the real stars on the plate. I was glad I'd ordered the meatballs, too. A good meatball isn't hard to find, but a great one is, and the ones at Nick's are savory, moist and covered in that stellar sauce. In the future, I'll order an additional portion to take home for a sandwich.

Even though we were absolutely tapped out at this point, we still ordered dessert. The Coppa Nick's ($8) is an epic gelato sundae: vanilla, chocolate and pistachio gelato with whipped cream and brandied cherries. The Bigne di San Giuseppe zeppole ($8), Italian doughnuts with powdered sugar, were enormous and appropriately crispy on the outside and fluffy on the inside, served with espresso whipped cream, chocolate sauce and raspberry syrup.

Dinner for two usually doesn't result in four large takeout boxes of leftovers, but the portions at Nick's are generous, and it's not the kind of Italian food you'd want to see go to waste. Luckily, it won't, as I'll be happy to eat Nick's food all over again.