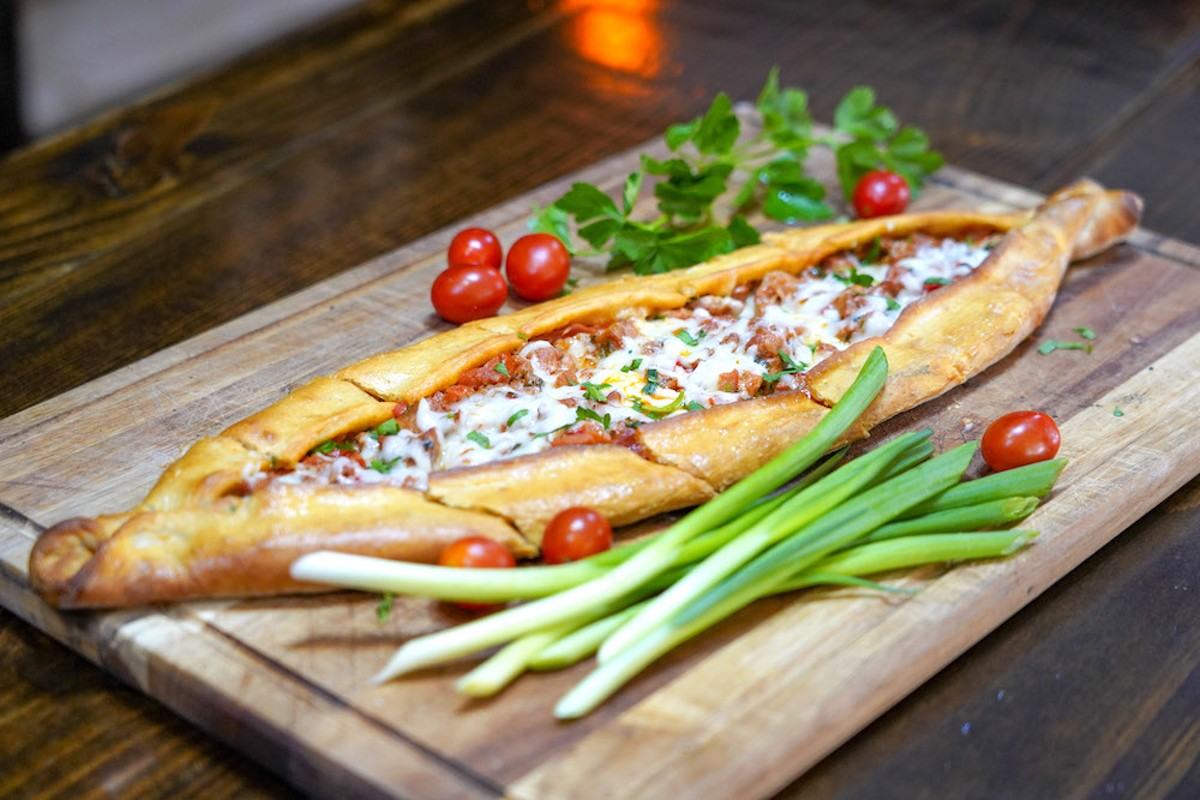 With the Turks and Russians figuring heavily into the history of the country now known as Moldova, its cuisine, not surprisingly, takes on the intersectional complexion of a crossroads nation. Super-quick history lesson: Moldova was once part of the Principality of Moldavia, which included Romania. As many Moldovans identify with Romania and Romanian culture, there's been a great desire from both countries to reunite. It's also why the veranda-less Veranda, a restaurant at the crossroads of Sand Lake Road and OBT, touts its "Romanian" cuisine even though it's run by Moldovans. It also touts its "Italian" cuisine for, I'm guessing, their less adventurous clientele, or perhaps as a ploy to put the "Roman" in "Romanian."

Either way, it's the part of the menu we consciously ignored, especially after having a chat with our affable server (who also happened to be the owner's brother). He played up dishes that were uniquely Moldovan and we happily played along, though we weren't exactly game after our first bite of mamaliga ($5.99), the most Moldavian of eats. Sure, we could appreciate the peasanty plating of two mounds of polenta topped with sour cream and crumbles of salty cheese, but it didn't exactly ignite our palates.

Stuff those crumbles and a little dill inside dough fried up in a pan, and, well, now that had the makings of a winner. It's called placinte ($7.99) and the doughy pastry drew immediate comparisons to Turkish pide. The pie is served with sour cream, but you'll soon come to realize that most everything here is – even Moldovan zeama ($7), or chicken soup. It had me wishing I were a festering cesspool of sniffles, desperate for a palliating broth. Spooning in a bit of sour cream gave it a nice tang, and taking bites of a whole serrano pepper cleared more than just my sinuses. Chili peppers aren't exactly synonymous with Eastern European cuisine, so it was surprising to see the serrano served with the soup. We were told the traditional method is to bite the pepper once and drop it in the soup, not to take repeated bites of it as I did. If anything, I know where I'm coming when I do fall ill.

A dish of cabbage and grape leaves ($14.99) stuffed with rice, pork, chicken and herbs is culinary convergence on a plate – Eastern Europe and the Levant, to be exact – but it's the Turks they have to thank for the most gratifying dishes we sampled. Mititei, rolls of grilled minced beef and pork ($15.50), and seasoned Moldovan minced beef patties ($14.99) called parjoale, were kebabs to the core.

Both paired nicely with a Bucuria cab from Romania and a Cricova merlot from Moldova, and both wines flowed on this particular night as a large party rollicked the atmosphere with singing, dancing and joyful carousing. We ordered another pour and enjoyed a couple of desserts – blintz-like clatite filled with cheese ($6.99) and fried Ukrainian pancakes called syrniki stuffed with Romanian cottage cheese and raisins ($6.99) – while taking in (at times, partaking in) the merriment. And, yes, both are served with sour cream. We felt buoyed at how they let a couple of outsiders like us into their happy little world but, then again, what would Moldovan cuisine be without letting outsiders in?