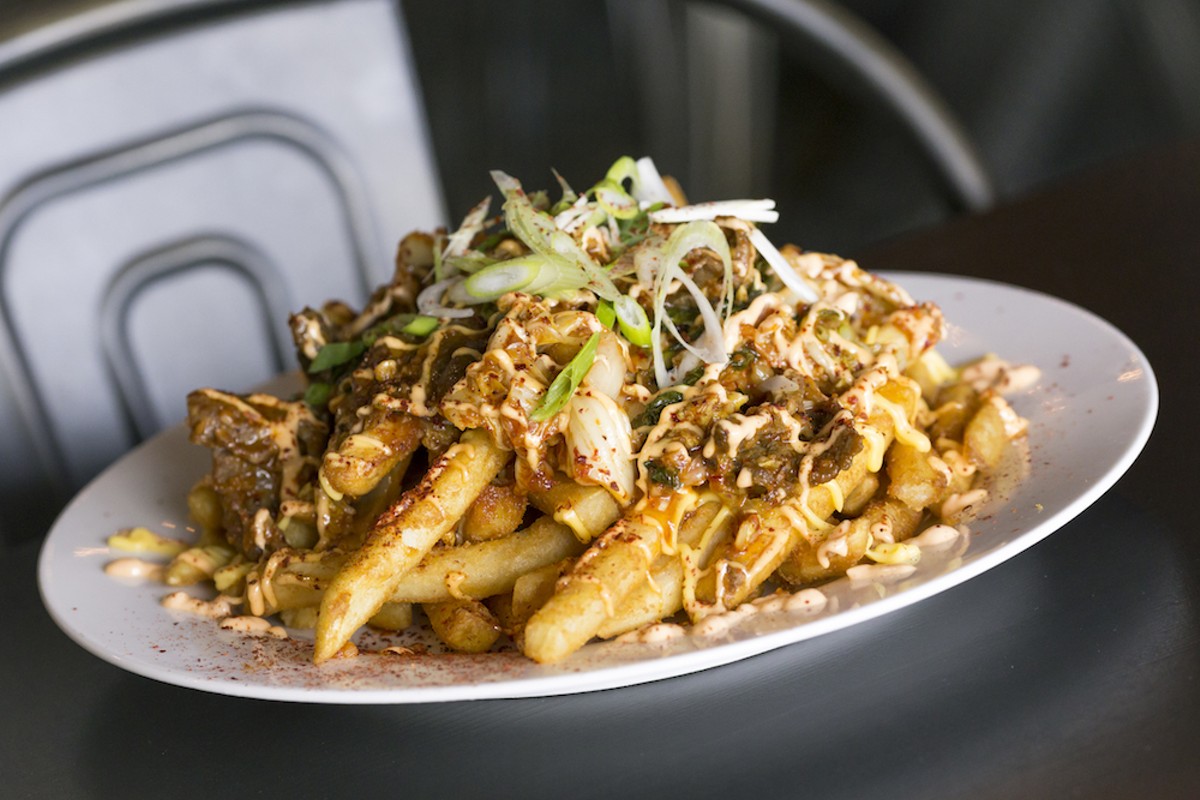 If you're hoping for an effusive welcome at Kai Asian Street Fare, simmer down. Owners Quan and Isra are two "brothers from other mothers" who trust that their food will speak for itself, and in large part, it does. The two have opened this 30-seat storefront where Casselberry, Winter Park and Winter Springs intersect, and Orlando's foodie set is aflame with fervor for their flavor-packed plates. They hang their hats on their Korean-style crispy wings as their signature item, and while those flats and drums don't disappoint, plenty else on the menu is well worth your tastebuds' time, too. The service is another matter.

Just about everything at Kai – other than the food – is bare-bones and utilitarian. The restaurant's decor is sparse, the kitchen is exposed to the dining room behind a glass counter, and service is about as impersonal as what you'd get from a food truck or street cart, where the atmosphere isn't the main event. Prices follow a similarly sparing model, generally falling between $3 and $15, but the portions are noticeably dine-in volume. In this way, Kai Asian Street Food falls in that same category as Sticky Rice: Bring a brood, order the whole menu, crack a few beers and let the flavors wash over you.

One look at the menu's verbiage and it doesn't take long to connect the two with the kind of David Chang/Eddie Huang too-cool-for-chef-school attitude. With wontons called "on fleek" and "LeGit," "Shrimpnado" tacos, and Japanese-style "Gojira" French fries loaded with bonito flakes and nori, the sense of play is apparent here. But the bluster has backup. As Chang and Huang might say if they were to eat any one of the over-the-top entrees at Kai Asian Street Fare, these guys are not fucking around.

On the Wednesday night I visited, there was only one other couple in the restaurant, which was a damn shame because the kitchen was not holding back. Every element of each savory dish was lit – both with bold flavors and ideal execution. The K-Pop and Lock ($9) loaded Korean-style fries were not just crispy, they were so crispy they were able to withstand an avalanche of bulgogi, kimchi and spicy mayo dripping down the sides. Even after 20 minutes of sitting and grazing on the six dishes we ordered, those fries held up.

We also tried one of Isra's favorites on the menu, the Soy Garlic wings ($7 for five pieces). No matter where your allegiances lie when it comes to Orlando's Korean fried chicken with that iconic rice-flour crust, these are perfection. The wings were steamy-tender inside and sticky-crunchy outside.

I'd rather be eating noodles than anything else most days of the week, so the piled-high plate of Legendary Garlic Noodles ($10, small; $15, large) were the stuff of my sweetest, most garlicky dreams. Note: This is not a first-date dish. Garlic is listed twice under the dish's description for good reason; every noodle had minced garlic clinging to its starchy strand. Diners can choose a protein to top their tousle of noodles (either shrimp or crab), but the shrimp I chose might as well have been absent. The protein addition is understandable as a reason to charge the entrée price, but wholly unnecessary.

There's a whiteboard behind the order counter that you'd be remiss to ignore, even though the staff taking our order obviously had. The questions we asked about the specials went largely unanswered due to admitted ignorance – stated as "no one has ordered it, so I don't know what it is." We trusted in the kitchen and ordered a Filipino longanisa sweet sausage bowl ($9.50) from the board. The charred chorizo sat atop a neutral palette of white rice, spring-mix greens, slivered green onions and a nicely fried medium-well egg. Next to the fountain drink station, a bevy of Asian condiments sat ready: fish and oyster sauces, the ubiquitous sriracha, rice vinegar and more. A couple of dashes of this and that served the bowl well, though not quite as well as a thoughtfully prepared sauce from the kitchen would have.

Dessert was disappointing. Asian sweets are exciting (Red bean! Taro! Pandan! Grass jelly!), and it was a shame that this area of the menu was so overlooked. There's only one, called "Matcha-Dusted Cheesecake," ($7) but the sparsely sprinkled matcha powder was negligible, and calling a fried eggroll wrapper filled with banana and a whiff of creamy filling a "cheesecake" was a stretch. Also, the whipped cream was lifeless, flavorless and likely canned. You can do better, guys.

Other than dessert, the haste with which we were hustled through our meal was the only sour note. Sending dishes to the table when they're ready, rather than as set courses, works for Kai, and gives the middle finger to conventional restaurant mores that you might expect from this unconventional crew. But attempting to clear plates while they're still being enjoyed is a cardinal sin (not to mention coming back a second and third time to ask if we'd finished when we obviously hadn't). This is especially frustrating when there's no line out the door or diners hovering for a seat.

These lapses in service and the one, uninspired dessert can be forgiven in a street-food atmosphere, where there's usually a donut or cupcake truck parked just a few feet away. But in a restaurant, there's gotta be more than just good food on a plate. Isra and Quan clearly have their flavor profiles down pat, but for Kai to be successful, they'll need to hone their full-service chops a bit further. There's a sign at the front of the restaurant declaring that the restaurant is still in "soft opening," and to be patient with any mishaps. But it's July, and Kai has been open since February. Time to grow up, grasshoppers.