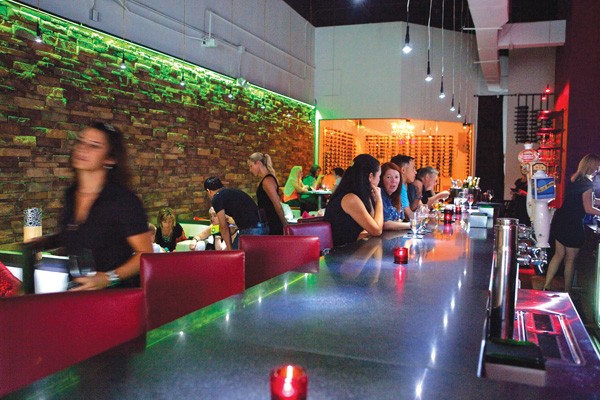 There comes a time during every restaurant meal when the server pops by and asks, "How's your food?" Unless the dish I've ordered is incomparably sublime or irretrievably foul, the reply is predictably the same: "Good." On occasion I've been known to respond honestly with a "Good!" or "Really good!" but more often than not it's the deceptively convenient "good" that servers hear. The rationale? For one, when dishes fall between subpar and middling, expending the energy to point out small deficiencies seems hardly worth it. Second, slagging a dish to a waiter, owner or chef can be a little uncomfortable – even when, on the rarest of occasions, it's deserved. And last, I like to keep the people cooking and serving my food in as blissful a state as possible. The constructive criticism, in written form, can wait until Wednesday.

Which brings me to Le Rouge – as slick, swank and stylish a boîte as you'll find in this city. Choosing white sofas for seating in a wine bar shows a slight lack of foresight, but there's no arguing that with merlot-colored walls, brick accents and a stunning bar, Le Rouge wears it well.

But while it may be better to look good, owner Mounir Elidrissi can't possibly feel very good about the food coming out of the kitchen, and dahling, that's no lie. With the exception of a couple of items, the menu is an altogether prosaic hodgepodge of small plates intended to gouge the deep-pocketed denizens of Dr. Phillips and Windermere. Who else would willingly pay $9 for a beet salad with bruised strawberries and lifeless greens? Or $12 for a diminutive filet mignon that tests the toughest of jaw muscles? It's hard to hide quality (or lack thereof), and it was interesting to note that the $13 Meyer Ranch filet has since been replaced with this inferior and chewy cut.

When the server asked how the mahi ceviche ($9) and melted manchego over five asparagus spears ($6) were, I responded with the customary "good," but this was average fare at its most average. Not to be outdone, a puck of steak tartare ($11) crowned with a quail egg and served with toasted crostini was also thoroughly … satisfactory. Lamb sausage ($10) seemed to be a nod to Elidrissi's native Morocco. I quite liked the spiced Fez-furters cross-balanced over a white bean puree, tomato chutney and truffle oil and wished they had a little more girth, or that I'd been served more than just two.

Wine, naturally, comprises the other half of Le Rouge, and it's certainly the better half. There's a broad selection offered by the glass, but expect a significant markup. There are three flights of 2-ounce pours offered for $10 – a red flight with a decent mix of affordable cabs and blends, an all-Spanish white wine flight and a "champagne flight" of bubblies, though none are from the Champagne region.

As vino was sipped, our likable server steered us toward the house-made molten chocolate cake ($8), but the lava from this parched slab had all but evaporated. The Nutella-and-banana panini ($9) was way overpriced, and the dollop of marshmallow fluff had an unpleasantly harsh aftertaste.

Apart from that, it was "good."