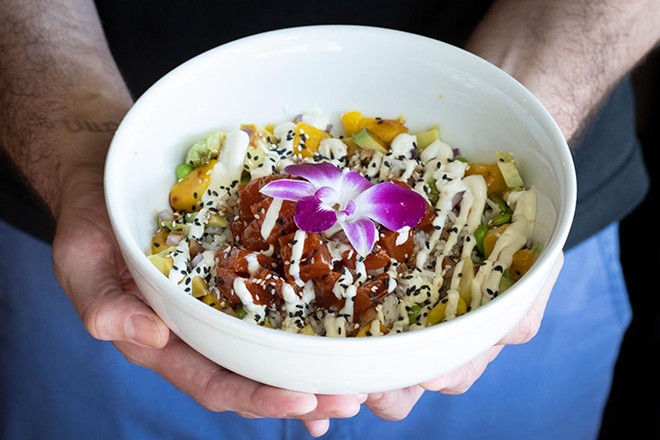 You don’t go with a name like Honolulu Harry’s without wanting to set a vibe. While there’s no loco moco, plate lunches or poi here, there are indeed distinctly Hawaiian flourishes at this young restaurant. And they do lean in on the Spam, so due cred there.
Rather than any traditional take on Hawaiian cuisine, the fusion fare at Honolulu Harry’s injects that vernacular into the contemporary American bistro menu. A casual but modern attitude permeates the place’s mien, from the décor to the cocktail bar. And it’s breathing some fresh island breezes into College Park.

Situated centrally on the ground floor of the Wellesley next to Armando’s, Honolulu Harry’s occupies a prime location. Besides a restaurant, it aspires to be a neighborhood hang, which suits the Edgewater Drive strip well. They keep leisurely hours from mid-afternoon until midnight (with happy hours from 3-6 p.m. and 9 p.m.-midnight), opening wider on Saturdays and Sundays with brunch service from 11 a.m.-2 p.m. There’s even some social programming like trivia nights.

The cocktail menu is, of course, island-themed with craft interpretations of classic drinks like the Mai Tai ($14) and daiquiri ($12), both of which can be had for a doorbuster steal ($5) during happy hour.

On their small bites menu, the most unique offering are the seared Spam fries ($12), which feature cut strips of the WWII-era American product that’s become a Hawaiian delicacy, served poking out of a real Spam tin. The dip — a creamy chipotle garlic sauce topped with micro greens — isn’t just complementary but necessary to temper the Spam salt bomb. Request extra. It’s basically an entire can of Spam, so please share this big, heavy appetizer, says your heart.

The tacos, on the other hand, are more sensibly sized but generously stuffed. They’re also some of the best pound-for-pound plates here, with smart flavor combinations that pop and sing. Of the two I tried, the slow cooked pork taco ($6) is a star. Tucked into a flour tortilla, the tasty and tender braised pork is crowned with a mélange of fresh pineapple slaw, creamy slaw and pickled onion, then drizzled with chipotle aioli and topped with micro greens. It’s a bite that hits all the notes and textures.

Despite the heftier ingredient profile with black beans and corn, the jerk chicken taco ($6) doesn’t eat heavy thanks to bright hits like fresh tomato, red pepper and zingy sauce. The jerk seasoning is there but tame enough even for spice weenies. 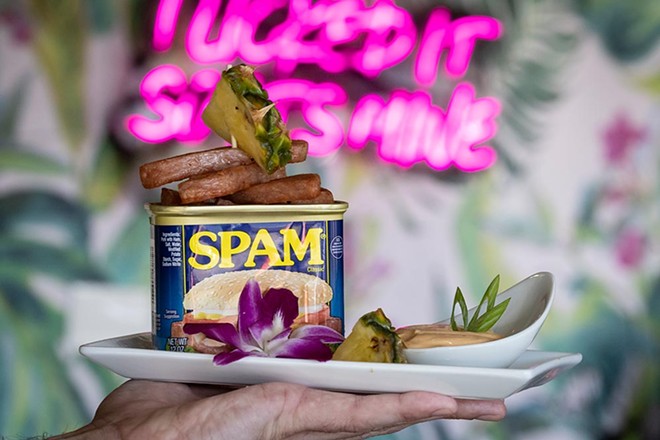 Honolulu’s Harry’s mains are primarily rice bowls and are probably the most handsome presentations on the menu. The ahi poke bowl ($20) is a dazzling kaleidoscope of red (seasoned tuna poke), green (edamame and avocado cubes), purple (red onion and orchid), orange (mango), white (sticky rice and creamy ginger wasabi aioli) and black (sesame seeds). The drizzle’s a little heavy-handed for a raw fish dish, but it’s a feast for the eyes.

The better main is the huli huli pulled chicken bowl ($16), which tops rice with deliciously marinated chicken that’s flanked by lightly caramelized pineapple chunks and sliced sweet plantains and topped with pickled onions and their mildly spicy dragon aioli. It can skew a little sweet so make sure that lovely onion gets in the mix.

Honolulu Harry’s strikes a nice, current balance of relaxed comfort and fresh flair. It’s a novel addition to the College Park scene, with food and cocktails that are approachable but pack enough craft, quality and identity to stand out from the crowded pack. Perfect for ohana.