Finally, the moment Floridian vegetarians have been waiting for (well, some of them anyway): Chipotle is rolling out sofritas, their braised tofu filling, in all Florida stores. It will be on local Chipotle menu boards and available for your burrito, tacos or bowl Monday, Oct. 13. So what does it taste like? I tried it this morning, and I'll tell you, it's ....

OK but first, saying you "like tofu" is kind of like saying you "like meat" — it's just not that simple. Are you a nose-to-tail Andrew Zimmern type, eager to try haggis and calf fries? Or do you stay down on the shallow end of the pool, sticking with safely processed boneless stuff like chicken tenders and cheeseburgers? Because there's more than one kind of tofu. There's the quivery, gelatinous silken tofu; the rougher, crumbly extra-firm nigari tofu; baked, fried, double-fried, pressed, preserved (aka "stinky tofu"; that would be your Andrew Zimmern-type tofu) ... "Do you like tofu?" is not a yes-or-no question.

And I like most of it (except that last one, admittedly), so I may not be the most critical taster of Chipotle's new sofritas. In fact, as a Chipotle fan*, I've been interested in trying it since they first started testing it, and was quite disappointed when the "national" rollout widely announced in February of this year turned out to be a BIG FAT LIE.

So what is this stuff? Sofritas is made from organic, GMO-free tofu (supplied by Hodo Soy) crumbled and braised in a broth with chipotle and roasted poblano peppers. It's spicy, but less spicy than I'd expected; the flavor is more just basically savory with strong cumin and pepper overtones. (I thought I tasted cilantro, but that could have been spillover from the pico.) Texturally, it's got a firmer chew to it than ground beef; it's not too soft, but it's neither spongy nor rubbery (common complaints about tofu). If you have any experience with veggie meat substitutes, the texture resembles Quorn more than, say Boca crumbles. I appreciated the fact that there were chopped peppers and larger chunks of tofu apparent in the mix – it wasn't just a Soylent Green-like goo. I tasted it on its own first, but once it was mixed in with all the other bowl ingredients, it was just a mildly spicy, chewy element.

Why eat it? I can think of a lot of reasons: 1) curiosity; 2) you don't like the idea of eating animals; 3) you're concerned about limited natural resources; 4) you're willing to care about that stuff some of the time, but not all of the time (aka "part-time vegan"); 5) you're trying to cut calories.

Sofritas is the lowest-calorie protein on the Chipotle menu, but it's higher in fat and sodium than any of the other proteins except carnitas. (Folks: Delicious as it is, carnitas is a sometimes food.) Since tofu has very little sodium on its own, that would be due to the broth in which it's braised. Breakdown below: 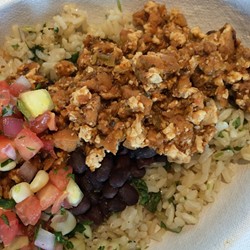 So: Make your own informed decisions based on whatever diet you follow (obviously vegetarians who are tired of fajita veggies being their only choice will be into it); or committed carnivores, maybe just give it a try one time?

I'll update after lunch to let you know if it gave me the dreaded "Chipotle stomach."

*(As far as any snobbery about Chipotle goes: They use sustainably raised meats, non-rGBH dairy, and their food packaging is 93 percent recycled content. If you're going to eat fast food, it's a lot better bet than any other big chain.)