Rice to the occasion 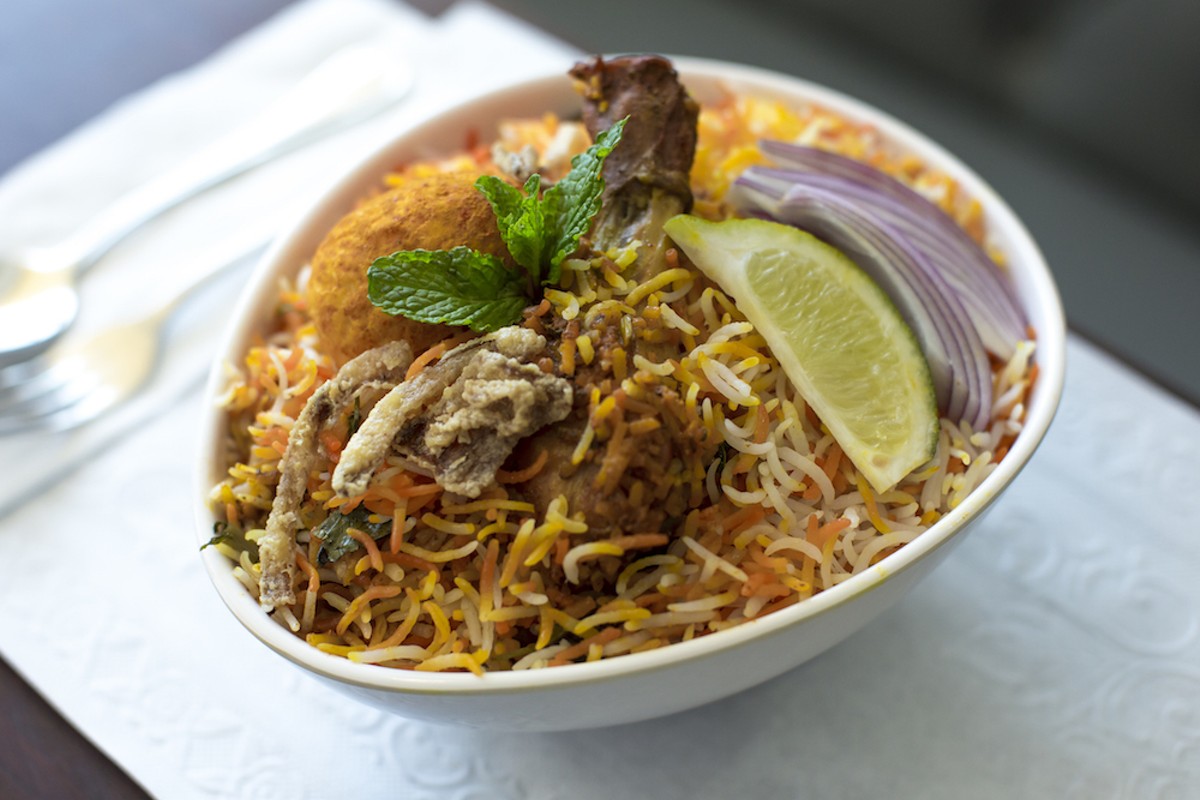 That there's a chain of restaurants devoted to biryani says something about the heady, perfumed, intensely spiced Indian rice dish so commonly served on special occasions. Having easy access to it courtesy of Bawarchi Biryanis by no means lessens its status at Indian functions, get-togethers and soirées. In fact, an Indian wedding without biryani would be like, oh ... Top Chef without Padma Lakshmi; Jawaharlal Nehru without the jacket; Dinesh D'Souza without the Trump pardon. At Bawarchi, wedding food can be had every day of the week, and damn if I didn't say "I do!" to a number of dishes.

Even before digging into heaping bowls of rice – awkward, somewhat impractically shaped bowls, I might add – there were fried indulgences to be had: gobi Manchurian ($9.99) with its deep-fried florets of cracklin' cauli shellacked in a fiery batter; and tongue-blasting chili pepper corn ($9.99) which, shockingly, isn't badged with a spicy icon on the menu. I mean, it's called "CHILI PEPPER CORN" and the batter is downright satanic! Pop after pop of the baby corn fritters into our panicked yaps was an exercise in masochism (and sweat-mopping).

When the time came for biryani we, naturally, opted for the "temper goat biryani" ($15.99), and it was every bit as flaring as its two spicy badges implied. The "temper" in this case refers to a cooking style where the spices are cooked in oil or ghee before being mixed with the rice. The resulting fragrance is as alluring as the yellow-tinged biryani itself, bony cuts of goat and all.

The Vijayawada special chicken biryani ($14.99), named after the biryani-crazed city in Andhra Pradesh, is a one-badger with boneless chicken and hard-boiled egg. The menu doesn't get into ingredient specifics as far as seasonings are concerned, so best to ask if you're curious. You'll find they incorporate everything from cardamom, cloves, anise seeds, fenugreek seeds, cumin seeds, peppercorns, cinnamon, garam masala (itself a combination of spices) and much more. One thing the biryanis all have in common: They're prepared using the dum method – rice and meats are layered into a covered heavy-bottomed vessel with a ring of dough sealing the lid to the vessel. It's a marriage made in kitchenware heaven – slow-steaming the rice and meats together in this manner separates the rice grains nicely, so you won't find any wet, clumpy bits.

For the rice-and-curry traditionalist, there's a karaikudi veg curry ($10.99) that's done in the Chettinad style, meaning numerous ingredients (sometimes as many as 30) go into making the thick gravy, the most noticeable of which are curry leaves. There are a lot of them in Bawarchi's rendition, and the bouquet is indescribable. I could say it's like carnations set on fire, then doused in a bath of mustard, but I'd be doing the aroma an injustice. From the tandoor, shreds of praiseworthy butter naan ($2.49) and garlic naan ($2.99) were enjoyed with a mixed grill that wasn't much of a mix. All the cuts were chicken – tikka, tandoori, malai (creamy garlic) and achar (pickle marinade) – though most, with the exception of a couple of malai morsels, were lush and tender.

A spot of chai ($2.99) and an order of gulab jamun ($3.49) makes a picture-perfect ending for the Instagram set. As I carried two bags of leftovers across the restaurant's threshold, I made a vow and a commitment to return – for richer, for poorer, in sickness and in health.