Even with a change of scenery, the mission of this vegan eatery remains the same: to make believers out of vegans and meat-eaters alike. 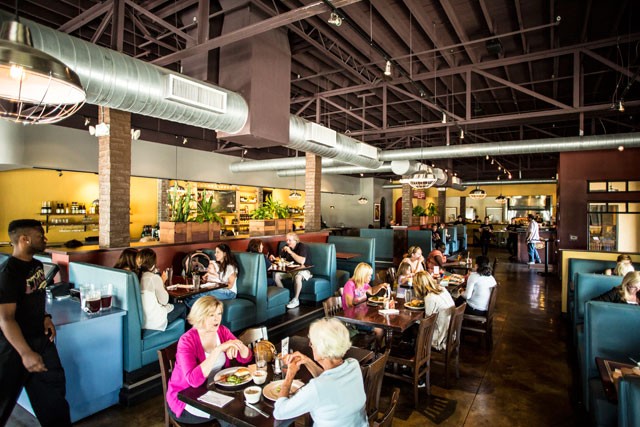 Photos by Rob Bartlett
Even with a change of scenery, Ethos' mission remains the same: to make believers out of vegans and meat-eaters alike.

When Ethos Vegan Kitchen moved out of their Ivanhoe Row digs and into the former Urban Flats locale on the corner of Fairbanks and New York avenues, many a vegan rejoiced, and with good reason. For one, it's within a soy meatball's throw of Rollins College, whose students present a potential boon to the eatery. Second, the 4,800-square-foot veg house is situated in an established culinary stronghold, where it can serve patrons until 11 p.m. seven days a week. So far as restaurants are concerned, it appears that the stretch along Fairbanks from New York to Park Avenue is as stable as it's ever been, particularly considering how well Keke's, Hot Olives and BurgerFi have established themselves. With the addition of Ethos to the neighborhood, there's no shortage of comfort in this short square block.

While the old Ethos served the purpose of introducing a vegan restaurant to the city's gastro-portfolio, my hope was that the new Ethos would steer vegan fare in a different direction, one where meatless variants of comfort fare took a back seat to creativity and innovation. Instead, Ethos gives us more of the same hearty fare – and, judging from our experience, that isn't an altogether bad thing. We gobbled up savory sausage rolls ($5.50) baked in a flaky pastry and noted the peppery notes in the TVP (that's textured vegetarian protein to you meat-eaters).

Best of all, we enjoyed the rolls with a free glass of wine – we lucked into one of Ethos' frequent "customer appreciation days." The healthy trio ($6.95) of house-made hummus, tapenade and tomato-mango salsa were as expected, though the hummus was, as one of my dining comrades remarked, "thick enough to spackle walls with." The dish was served with surprisingly light potato-chive bread care of Casselberry's Olde Hearth Bread Company.

When I reviewed Ethos back in the spring of 2008, I noted their sheep's pie ($9.95) could've used a kick of seasoning, but not this time around. Under the heaping fluff of whipped potatoes lay an aromatic melange of sautéed onions, carrots, peas and broccoli baked in a heady gravy. Adding seitan ($2.50) only enhanced the texture of the dish. The "What's the Dilly, Philly" ($8.75) proved to be a worthy stab at winning over cheesesteak lovers (again the bread, French in this case, was outstanding) and, while a tad over-oregano'd, the calzone ($10.95) was the favorite of the table. Meal endings like amaretto-heavy chocolate mousse ($3.50) and the sterile slice of orange cake ($2.50) were largely forgettable, even with soy-milked cups of coffee ($2.25).

When Ethos first opened four years ago, I expected a swell of vegan and vegetarian restaurants to sprout up, offering a diverse, even adventurous, spectrum of dishes, but we are not there yet. Still, while Orlando won't make the list of the top veg-friendly cities in the nation, there's enough at Ethos to help diners decide whether tofu or not tofu.