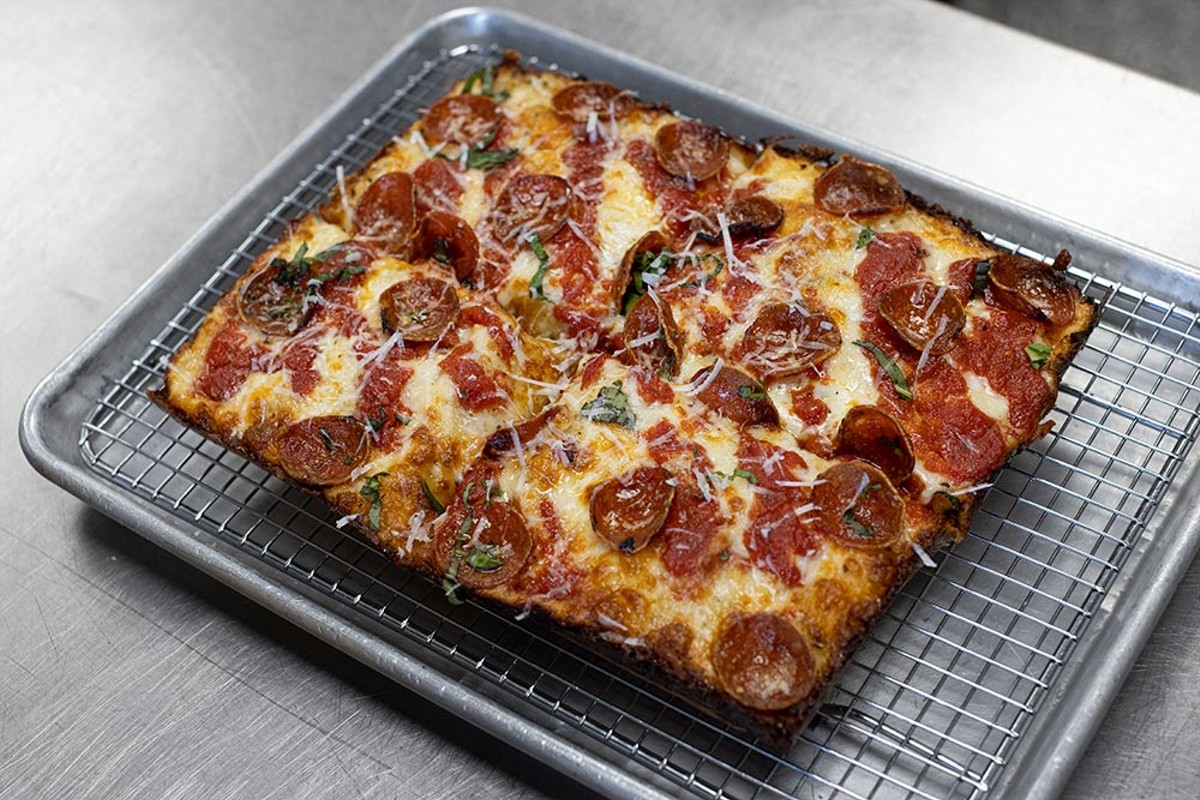 Bob Probert, the Detroit Red Wings bruiser who spent a good part of his career getting into some pretty epic fights with Wendel Clark and Tie Domi of my beloved Toronto Maple Leafs, has a pizza named after him at Detroit-style pizza house SoDough Square. It's called the "#24 Enforcer" ($14.99) and comes topped with blood, molars and a generous sprinkling of a mysterious white powder.

No, of course it doesn't, but just seeing a pizza paying homage to this since-passed hockey hooligan got me seething. I wanted to order the pie just so I could punch it in the face, then throw it to the ground and whale on it some more. But unlike Probert's unsightly mug, the #24 Enforcer is kind of a beaut with its frico'ed edges, airy crust and holy mess of meat. I tore into it — quite violently, I should add — then tore into it some more until bits of pinched sausage, pepperoni and smoked bacon littered the cooling rack on which it was served. "That's five for unsportsmanlike conduct," said the pal and pulled the rack toward him. So, while I contemplated my actions, I also contemplated the manner by which owner Rob Bair, a Detroit native, created his magical Detroit-style crust. 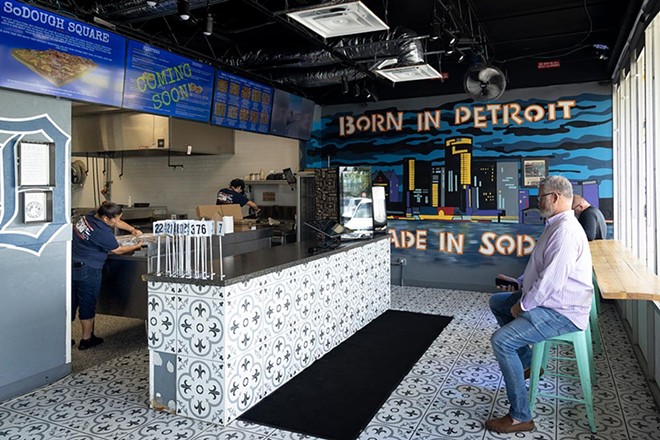 For all you pizza geeks, here's the process: 1) The dough is bulk-fermented (that's the dough's initial rise) for 12-18 hours in a cooler. 2) It's then portioned and stretched into deep, rectangular pans slicked in garlic olive oil. 3) The dough is allowed to sit at room temperature until it's proofed. 4) Then it's topped with a blend of high-fat Wisconsin brick cheese, Amish white cheddar and mozzarella right to the edges of the pan (it's how Detroit-style pizza gets its characteristic crispy, caramelized crust — the "frico"). 5) The sauce is layered on, followed by additional toppings. 6) The pie is baked at 500 degrees Fahrenheit.

The verdict? A crust that isn't just crisped around the edges, but crisp on the bottom as well (a result of greasing the pan with garlic olive oil). It's incredibly light and airy, too, more so than Jet's, the Detroit-style pizza chain with an outpost in Apopka. But Jet's isn't the inspiration for Bair's pies. Rather, it's Buddy's — the birthplace of Detroit-style pizza on the corner of Conant and Six Mile Roads in Daytwa. His "6 and Conant" ($11.99) with red sauce, fresh basil and that brick cheese blend, along with pecorino-Romano, is an instant classic and as Detroit as it gets. Same goes for the "Detroit Rob City" ($15.99) that layers whipped ricotta, Ezzo pepperoni (it cups), pinched sausage and Mike's Hot Honey along with the basil and red sauce.

Bair, the man behind Tin & Taco, offers a taco pizza called "T&T" ($15.99) with crushed Doritos, seasoned ground beef and cotija cheese, as well as the "Big Mac Attack" ($15.99) that bears a taste likeness to the McDonald's sandwich. Really, there aren't any losing combinations here, not with this crust. It's probably why they go through 250-300 pies per day and run out well before the 9 p.m. closing time, so get there early (they open at noon).

Oh, and all you Juggalos will be pleased to know that Faygo ($1.95) can be enjoyed with any of the pies. Just don't spray the soda inside the pizzeria, or next door at Tin & Taco where SoDough Square's patrons eat their pizzas. But feel free to "whoop whoop" when your pie arrives. The long wait really is worth it. When it comes to the better pizza joints in town — Pizza Bruno, Piazza Italia, Prato, F&D, Antica, Antonella's, you name it — trust me when I say that SoDough Square's pies have the edge.