Photo by Maya James
Chef Jenneil Ross, owner and founder of DaJen Eats Café and Creamery in Eatonville
When you walk into DaJen Eats Café and Creamery in Eatonville, you can expect to be greeted with two things: the smell of traditional Jamaican jerk and curry, and Chef Jenn Ross' smiling face. That is, if she isn't busy in the kitchen whipping up her next vegan recipe.

With a glowing 4.8 star rating on Google Reviews, in less than two years the place has become a popular and beloved staple of the small town and well beyond. So, when COVID-19 restrictions began to hit in March, Ross and her team knew they needed to find a way to weather the crisis.

Through creative brand redesign, learning to let go of expectations, and incorporating menu expansions that stay true to their mission, the team managed to not only stay in business but to grow and remain relevant.

"For me, the biggest takeaway from COVID has been the freedom to look things over properly," Ross said. "To look at what works and what doesn't work." What works is apparently compassionate yet delicious vegan foods with a Jamaican irie flair, which is DaJen's entire philosophy.

Their food identity is simple: vegan and Jamaican flair, just like Ross herself. She also brings with her the concept of "irie," a uniquely Jamaican expression that she says means happiness and contentment.

Originally starting out at the Citgo gas station on North Orange Blossom Trail, Ross experienced massive growth when she got her own building a year later in June of 2018. Shortly before the pandemic hit, Ross had also launched a shiny new food truck, Irie on the Go, with plans to take decadent vegan dishes outside of Eatonville.

"We haven't taken the truck out since COVID," she said.

Though her new venture was sadly cut short, it didn't die. Instead, Ross and her team got inventive and repurposed the food truck.

Playing around with ground seitan one day, a plant-based protein used to mimic meats, the team became inspired to start a line of vegan steak burgers to run exclusively out of the truck.

And just like that, every Saturday now at DaJen Eats it's "Burger Day." Though customers can still come into the café for their favorite vegan menu items, right outside the restaurant on the parking lot, the food truck sells a variety of what Ross calls "thick, delicious and saucy burgers that are just crazy." 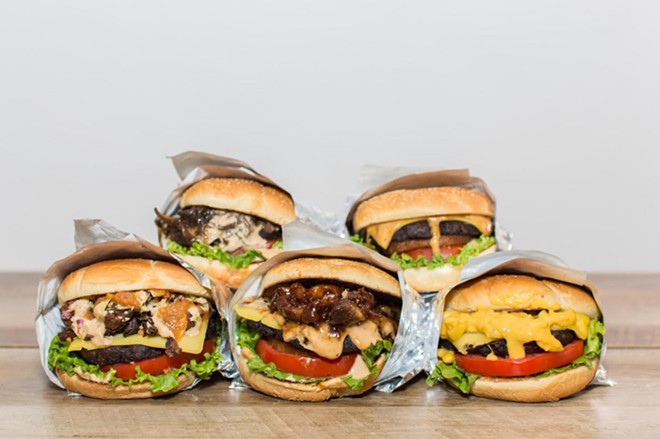 Photo via DaJen Eats/Facebook
DaJane Eats' new line of vegan steak burgers, available exclusively at the Irie on the Go food truck on Saturdays
Ross says the idea behind the food truck was always to break through the vegan dish stereotype of blandness. Unlike her restaurant menu items, the truck burgers throw the entire concept of healthy-eating out the window, putting out nothing but savory, melty, saucy food items.

"We're not worried about health, we're just going to do ridiculous vegan food," Ross said laughing. "If you close your eyes and think of the exact opposite of what a vegan dish should be - that's what we create on the truck. It's meant to be decadent."

While innovation was at the backbone of their survival, the team was also faced with sacrifices.

Ross says it was a hard move for her to let go of breakfast hours, as it had always been a normal part of her vision and execution since her days at the gas station. However, she says she made a commitment to her team to do "whatever it takes that makes sense" to keep everybody on the team.

Local and national businesses everywhere laid off employees in great numbers, but Ross proudly says she got to keep every one of her people.

"I was very much in love with the idea of breakfast," Ross said. "But I had to bring myself to make this logical very difficult decision, and look at what times we were most productive. Everybody's hours got reduced, but we didn't lose anyone due to COVID."

Ross said she also managed not to lose any menu items. DaJen Eats actually expanded food choices with their new burgers and by reviving her line of frozen meals called Exclusively Irie: Personal Chef Meals In Your Freezer.

Ross's frozen meals go all the way to the beginning. They existed even before the restaurant, when customers could order single meals off her website and she would "drive like crazy" around town to deliver them.

Once she opened her café, she shifted her focus, but when the pandemic began to slow down foot traffic, she shifted again. Customers in Georgia and Florida can now order a variety of delicious frozen vegan meals to be shipped right to their homes, as Ross continues to build her established brands and sharing herself with the culinary world. 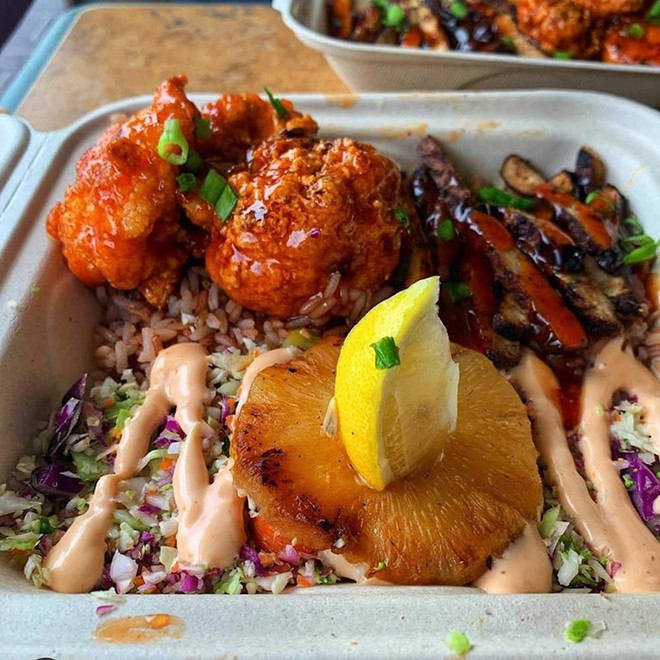 Photo via DaJen Eats/Facebook
Like her famous Irie Cream dairy-free ice creams, which she also expanded, adding four new flavors. The Irie Cream has been with Ross since the beginnings of the café at the gas station and is now offered to be bought and shipped in bulk quantities.

When asked if it is difficult to "veganize" what many consider to be Jamaican classics, Ross responded confidently that it is not. In fact, she explained that Jamaicans regularly consume "Ital food," from "vital food," a plant-based natural food diet highlighted in the Rastafarian movement.

For Ross, the ideology behind Ital food and her personal food philosophy is a little different, but the practicality of it is the same.

Ross says veganism is at the core of everything she does and that her restaurant, DaJen Eats, is an extension of who she is as a person.

"For me, being vegan is a way to live out loud the compassion that I feel towards human and nonhuman animals," Ross said. "And it is that compassion that we bring to the plate at DaJen Eats."

However, the compassion that pours out of Ross and into the meals she serves goes beyond caring for animals - she also cares for her community.

Eatonville, where DaJen Eats is located, is the oldest black incorporated municipality in the United States, and the first all-black city to be incorporated in Florida. It was formed in 1887 by former slaves, and Ross says it is mere steps away from being a food desert. There are no supermarkets in town, and residents must instead travel to Maitland for choices, which isn't always possible for them.

"The result of that has been certain diet-related diseases," Ross said, citing hypertension and diabetes.

"So for us, the philosophy is always going to be ‘Let’s leave the animal off the plate, let’s be compassionate, but then we tailor how we express that compassion in different ways.”

This is why Jenn made it her mission to emphasize not only vegan food, but felt responsible to also bring Eatonville residents healthy vegan food in her café. While in her new truck, she allows her customers to indulge.

Photo by Maya James
Irie Cream, the Dajen Eats Café and Creamery official dairy-free ice cream, comes in 10 sweet, delicious flavors to enjoy.
Aside from nourishing her community, Ross manifests her passion for cooking not only through running her restaurant, but teaching her community how to cook like a true vegan.

In her Irie Vegan Culinary Academy classes, her favorite demographic to teach are inexperienced vegans who have grown frustrated.

"They leave going, ‘That’s not as hard as I thought, and I can actually do this,’" Ross said. "I love that."

In her cooking lessons, which since COVID-19 are no longer in person and are now ran via Zoom in a partnership with the Center for Health and Well Being of Advent Health, she emphasizes that rather than focusing on specific recipes, it's best to teach the reasoning behind specific techniques.

"My classes tend to be vegan basics," Ross said. "This is how you survive veganism without pulling your hair out (...) that sort of thing."

With the academy, the café, the food truck, Irie Cream, and the frozen meals, that is five brands that Ross has established and modified in a short time. Since COVID, she said she tries to focus heavily on just one or two at a time, which has been clearly successful for her, so far.

When she talks about her work, though, Ross often speaks in "we," referring constantly to her team.

"I have been blessed with some incredible people in my corner," Ross said. "There are people who see my vision and just come on board to make it happen."

Ross, who goes by Chef Jenn, says she is a big audacious goals kind of person, but it is her team that makes those audacious goals and turns them into "bite-sized, achievable parts."

Ross leaves behind an authentic piece of herself behind in everything she does – from teaching to public-speaking, conducting business, cooking and serving. No matter how many hats Chef Jenn wears, she remains a true "Irie" vegan.