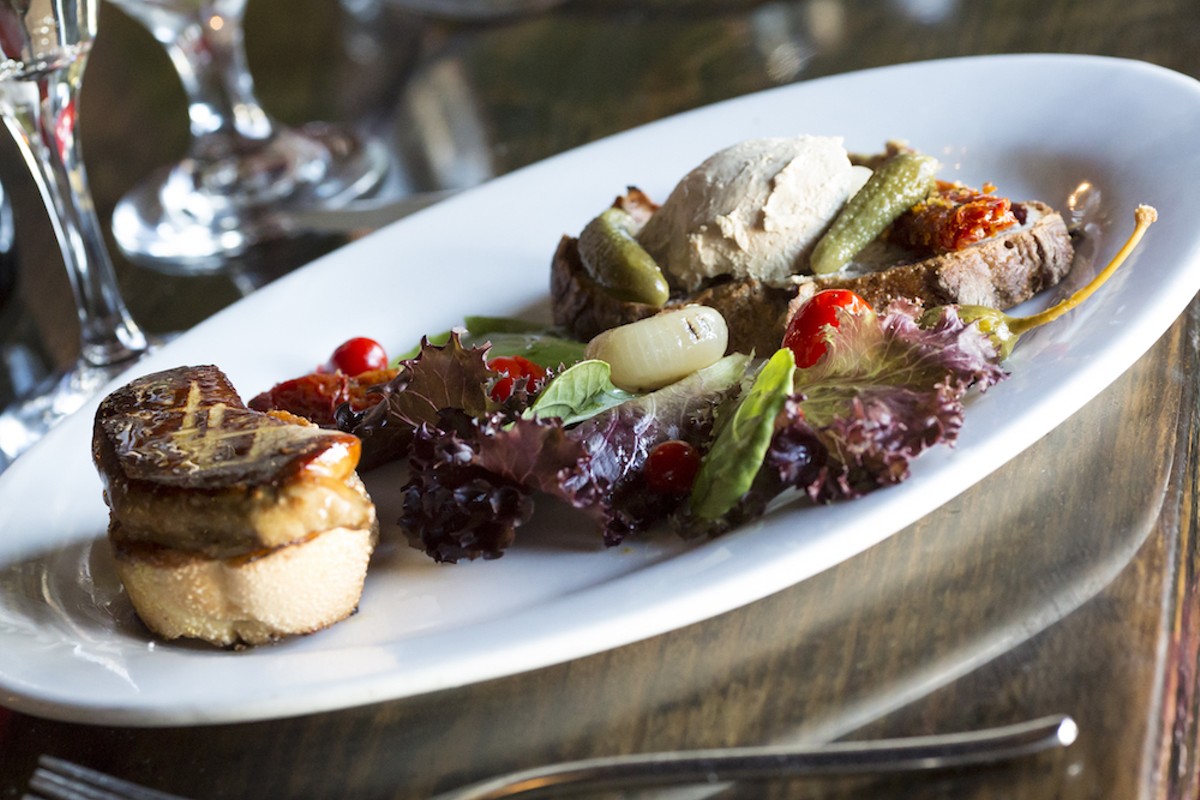 Eddie Nickell and Nick Olivieri: two names in this city's royal family of restaurateurs who have been responsible for such noted restaurants as the wine-centric Funky Monkey and Southwest-themed Prickly Pear; the rollicking joint Bananas Modern Diner (miss those drag gospel brunches!); and a couple of clunkers in Nick's Italian Kitchen and Restaurant ASH (hey, they can't all be winners). Their latest venture – Bites & Bubbles – is housed inside the birthplace of the original Funky Monkey and was supposed to be about fulfilling Champagne wishes and caviar dreams, but it appears as though aims have changed a bit since the restaurant's May opening.

Oh sure, you can get your sparkling fill from a handful of French bubblies (bublés?), but I expected more than just a handful. As for the caviar, why, there's no beluga or osetra to speak of. In fact, there's no caviar offered at all. The menu, rather, is a hodgepodge of French-inspired fare or, in the case of the raclette potatoes ($9), Swiss-inspired. A tableside melt and scrape of the fromage over a plate of potatoes, cornichons and pearl onions made for a rich, if simple, start – like poutine without the gravy.

Should bivalves command your attention, there are cornmeal-crusted Gulf oysters ($12), perfectly fried and set in their shells with a garlic aioli. Order them raw on the half-shell ($2.50 each) and you'll get a theatrical presentation involving dry ice. This being a month ending in "y," though, we ordered the fried versions on one visit, but were mistakenly brought a plate of raw oysters – and we noticed similar faux pas at other tables. We witnessed dishes being brought back to the kitchen and, as the doors swung open, looks of perplexity on the cooks' faces.

Another observation: Nickell and Olivieri haven't hired an executive chef, a fact that became quite evident after a spoonful of French onion soup ($8). The gruyère (at least I think it was gruyère) had melted and hardened onto the overdone croûte. Beneath the tempered surface lay a thickened stew of chunky carrots, celery and onions – not the texture, nor the ingredients, I was expecting.

An overcooked, over-peppered, pan-sautéed snapper ($24) came adulterated with a messy sauce of tomatoes, peppers and shiitake mushrooms. Chunky mashed potatoes and a sweet potato puree seemed like oddly heavy side choices for the snapper when a lemon-beurre and some simple roasted vegetables would've made a fine supporting cast. (When it comes to fish, less is more.) Those same sides were appropriate accompaniments to the duck leg confit ($14), its superbly crispy skin enveloping meat that yielded to the lightest touch. This "specialty bite" was a far better effort.

We were told to leave room for bananas Foster ($10), and we're glad we did. You won't get the tableside flambé, but Olivieri will scoop hot caramelized sugar into the sizable bowl of ice cream and bananas for you; he'll even toss in some Amarena cherries for an Italian twist. Don't bother with the vanilla crème brulée ($8), however: The layer of custard is too shallow, and the texture too firm to enjoy.

That said, Bites & Bubbles is an enjoyable restaurant. Touch-ups to the interior design (and a longer bar) create a sense of comfort and make you want to stick around for another glass of wine. Plus the affable Nickell and Olivieri keep things buoyant with their gracious style and willingness to please patrons. No doubt their bubbly personalities can take a bit of the bite out of this review's bark.