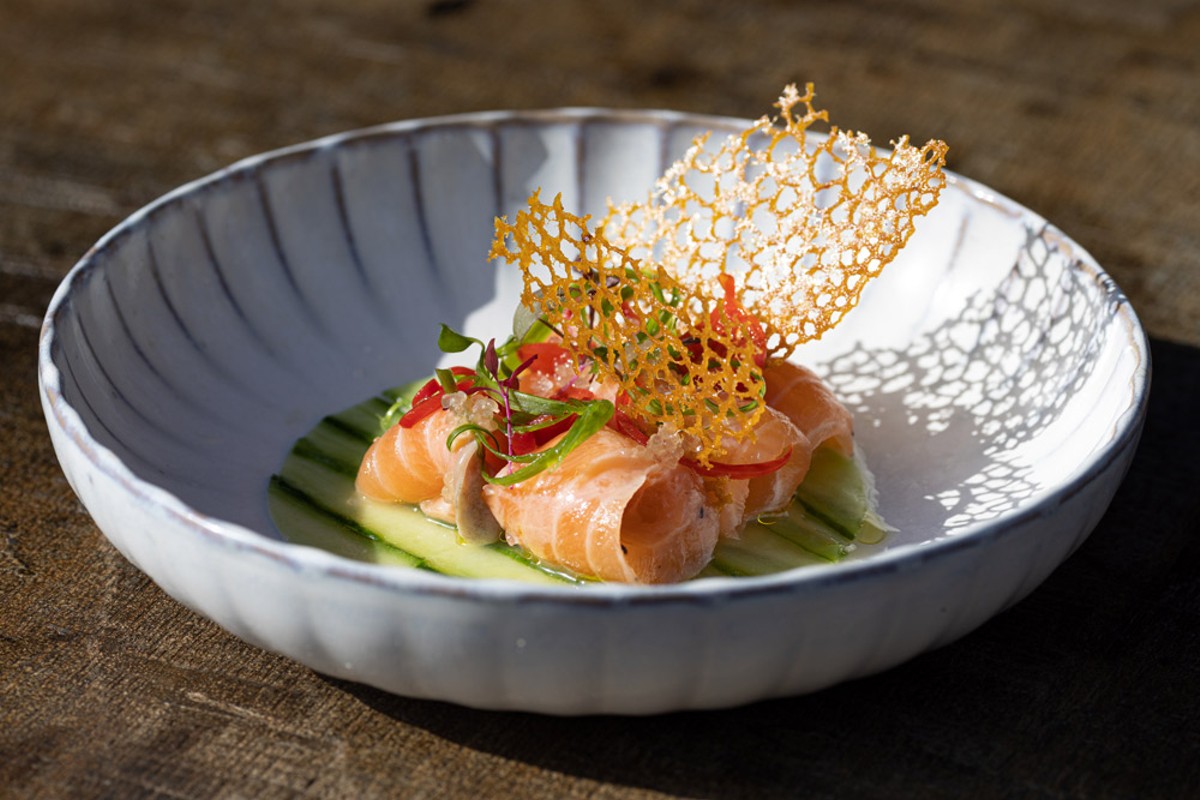 I've heard more than a few local food folk poke fun at the hot new thing in town, saying she's more style than substance; that she surrounds herself with rich, pretty poseurs; that she's a bit of a pyro. While some of that chatter about Ava may be true, the Mediterranean starlet turning heads on Park Avenue has made other restaurant-goers completely forget about the grand dame who once strutted her stuff in this very space. What was her name?

It'll come to me but, right now, I'm occupied by Ava's form. Her visuals were styled by OV & Co., the same design house responsible for the trendy, airy aesthetics of restaurants from West Hollywood to Scottsdale to Miami (where Ava's big sister, Mila, lives on Lincoln Road). The sweeping curves, graceful arches and limestone plaster are a real sight for sore restaurant eyes. As I study Ava's natural elements — woven rattan, rope, scattered greenery ... "WHAT IS THIS?!" My friend startles me out of my reverie as he approaches.

"I know, right? It's like a movie theater." I've been standing in line, about 20 people deep, for a couple of minutes.

We have reservations, but it's not quite 5 p.m. and the restaurant hasn't opened its doors. The queue allows us a moment to check out the clientele — we see Winter Park's old-money set, an HGTV personality, some models, and, uh, some "models" who have eyes on the old-money set (and perhaps the HGTV personality). No question, Ava scores when it comes to people-watching, and it swings big with ambitious food and beverage offerings.

For instance, the potato mille-feuille ($15): Making it is undoubtedly a laborious task — buttery sheets of potato are layered with chopped chives and kefalograviera cheese before being browned to a fall-to-your-knees crisp. This must be what they serve to the gods at the Golden Arches on Mount Olympus. Honestly, I'm not sure I can go back to eating regular ol' fries. Then again, I'm a mere mortal, so I probably can. I notice a truffle aioli dip was supposed to be served with the four flaky blocks, but ours tasted more like a tapenade, not to say it wasn't wonderful.

Just as wonderful was the dorade tartare ($24), a dish that hasn't received as much fanfare as others at Ava, likely because it isn't set ablaze. The fish is mixed with a piperade (a colorful sauté of onions, green peppers and tomatoes representative of the Basque flag) and slicked with a chili oil made from espelette, the pepper celebrated in the Basque town of, you guessed it, Espelette. I see citrus kernels in there as well, and it all swims in a vinaigrette made from Greek mountain tea and oranges. Our Peruvian server likened it to ceviche without the choclo and sweet potatoes.

But it's hard not to get sucked into the world of tableside flambées when foods are being ignited in ouzo-licked flames all around you. The grilled halloumi cheese ($19), our first foray into Greek lit, was pricey but insipid. The halloumi's characteristic tangy flavor seemed to have evaporated along with the alcohol; we couldn't even taste the remnants of the ouzo. Only the sweetness of the orange blossom honey drizzle remained, and $19 is a lot to pay for sweet cheese. It looked pretty on that plate full of coriander seeds, star anise and rosemary, though.

The branzino ($55) fared a whole lot better, but at that price, you can't help but feel you're mostly paying for the show. The fish, caked in salt, is already cooked when it's wheeled to your table — the flambée is said to infuse the fish with a pleasant salinity, and that it did. Don't expect any sides though, even at that price, unless you count the charred lemon it comes with. It's why we ordered a truffle risotto ($28), cooked at our table in a stone vessel, with the half-rack of medium-rare lamb ($48). If you're looking for a winning combination at Ava, this is it.

In the midst of other tableside theatrics — a Greek salad ($22) was being tossed to our left while an old-fashioned ($16) was being smoked to our right — we dug into marinated chicken skewers ($16). "We shouldn't have ordered this," says my pal, and he's right. Give credit to our server — he really sold it — but unless you're on a restricted diet, pass on these dry morsels and order anything else. Well, except the halloumi.

We indulged in a fair bit of guzzling — the Gibson ($15) is a dirty martini imitating a Greek salad with kalamata olive oil–washed vodka, Martini Ambrato vermouth and "Greek salad" shrub. It's served with a feta crisp that you bite into before taking a sip. The margarita verde ($15), comprising fruity, botanical flavors and orange-habañero spice, brings the fire without the need of any tableside flames. The ilio mule ($16), with mezcal, ouzo, rose cider, strawberry, fennel seed and sundried tomato, was more sweet than smoky. But the impressive wine selection is worth poring over — we appreciated being able to order an Etna Rosso by the glass. There is a $40 corkage fee, but if you bring your own bottle and order one from the restaurant, they'll waive it.

Whatever you do, don't waive your right to dessert. Lead pastry chef Lilith Grace fashions a lovely chocolate fondant ($12), her take on a caramel-filled lava cake, that she serves with a gelato flavored with mastiha, Greek mastic liqueur. As incredible as that cake was, I found myself spooning more of the gelato. The mille-feuille, aka the Napoleon, just so happens to be my all-time favorite pastry, and Ava's po-mo take ($12) is an absolute stunner. Wafer-thin rounds of phyllo come layered with mascarpone cream, crumbled with almonds, topped with four different berries and squirted with a Lillet-infused berry coulis. It's a classy ending for a classy joint.

Leaving Ava's transporting environs and re-emerging onto Park Avenue takes a moment of readjustment. Looking into the restaurant from the outside makes us realize just how inviting, seductive and luminescent Ava really is.

Luma! See? I knew it would come to me.