What's the likelihood of Florida getting a $26 million Bear Grylls theme park? 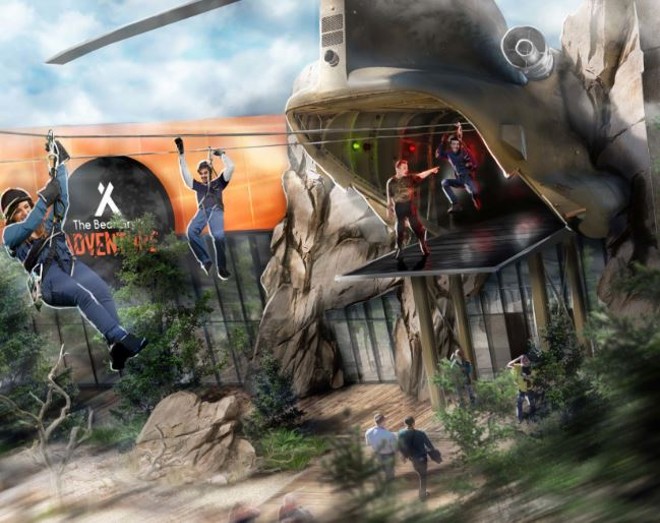 Image via Bear Grylls Adventure | Twitter
Most of the midway attractions by Merlin, like their Madame Tussauds wax museums and their Sea Life aquariums, aren’t known for their thrills, but the latest concept by the U.K. company is all about pushing the limits of extreme thrills.

The $26 million Bear Grylls Adventure slated to open in Birmingham, England this fall is focused on bringing some of the most extreme experiences ever conceived by the company.

Admission, which starts out at just over $32, offers four "basecamp" activities with four more thrilling "challenges" offered as upgrades, with each challenge lasting between one to two hours in length. The "challenges" include Dive, iFly, Climb and High Ropes. All four of the challenges also include a photo package.

Image via Bear Grylls Adventure | YouTube
The Dive challenge involves scuba diving through a 228,000-gallon tank that has live sharks, a giant megalodon jaw prop, and a simulated shipwreck.

Unlike most shark dive attractions, here guests won’t be in a cage and aren’t required to have any previous experience. The central indoor plaza area of the attraction has large windows looking into the shark tanks where guests can watch others as they complete the Dive experience. A portion of each Dive ticket will be donated to the shark conservation group The Shark Trust.

Drawing inspiration from Yosemite’s El Capitan, France’s Fontainebleau boulders, and Everest the Climb experience brings theme park-level rock work to a rock climbing experience. 20 different routes are offered to allow for multiple attempts during the one-hour challenge. The actual boots and oxygen masks Bear Grylls wore on his Everest climb are displayed to help inspire guests attempting their own climbs.

Image via Bear Grylls Adventure | Facebook
iFly is an indoor skydiving experience similar to the ones found around the world, including on Royal Caribbean cruise ships, with the large clear cylinder visible from other guests areas.

The only outdoor section to the attraction is the High Ropes course. Hanging above the main entrance to the Bear Grylls Adventure is the backend of a military-style Boeing Ch-47 Chinook helicopter that guests out of to access the nearby ropes course. At five-stories tall the free roam style course clocks in as the tallest of its kind in Europe.

Image via Bear Grylls Adventure | YouTube
A map of the four 'basecamp' activities at the Bear Grylls Adventure
The "basecamp" offers escape rooms, a maze with rooms that shrink and crawling tunnels, an archery area, and an assault course. Each of the smaller activities takes around 20 to 30 minutes to complete. All four of the challenge upgrades include access to the basecamp activities.

A café and a gift shop round out of the attraction.

With months still to go until the new attraction opens its doors, Merlin is already looking to open other locations with Merlin Entertainments CEO Nick Varney confirming projects in both China and the United States are already in the works.

Image via Bear Grylls Adventure | Facebook
The archery section of the Bear Grylls Adventure
Merlin typically groups multiple midway attractions close to each other with tickets that include the numerous attractions being a primary offering. With a Legoland theme park, Madame Tussauds, and a Sea Life Aquarium, the Central Florida market has the most substantial Merlin presence of anywhere in the United States making it an appealing place for Merlin to invest more in.

Merlin operates no attractions designed for this demographic in the United States. Previously, Merlin was rumored to be interested in buying the Busch Gardens duo of theme parks from SeaWorld though both parties now confirm no such sale is moving forward. Despite the deal not happening Merlin expressing interest in those coaster heavy parks shows that the company is willing to go after the same thrill-seeking demographic here that it draws in with its coaster based parks in the U.K.

Image via Bear Grylls Adventure | Facebook
Concept art for the highly themed maze experience at the Bear Grylls Adventure
With a seemingly endless amount of escape rooms, high ropes courses, skydiving options, and thrill the Central Florida market may prove a tricky one for Merlin who has up to now seen success with their operations here, notwithstanding exiting from operating the formerly named Orlando Eye observation wheel earlier this year.

Both a skydive experience and high ropes course have been rumored for ICON Orlando 360, formerly I-Drive 360. But with the Bear Grylls Adventure requiring such a large footprint, its unlikely Merlin would build one at that location. The developer of ICON Orlando 360, Unicorp, does own property directly across the street from 360 with previous plans for that property now looking to be on hold as they focus on a massive new entertainment complex slated for Palm Parkway near the Vineland Avenue outlets.

Despite being marketed to an entirely different demographic, the Legoland Florida Resort, in the heart of Polk County, might be a good option for a Bear Grylls Adventure. Also, unlike the majority of Legolands around the world, the Florida location offers no nearby Merlin attractions with the sole exceptions being the Orlando attractions, nearly 90 mins away, and the Legoland Water Park, for which a Legoland admission ticket is required. Merlin has stated numerous times that it plans to make the Winter Haven resort into a multi-day destination. Merlin opened a second hotel at the resort last year.

Other possible locations for the Bear Grylls Adventure in the United States include San Francisco where Merlin operates a Madame Tussauds and the only Dungeons attraction in the country. Southern California where Merlin has a Legoland and a Sea Life aquarium is also a likely location. But with 30 attractions spread across the U.S., Merlin has plenty of areas they’re already in to open a Bear Grylls Adventure.

With plans already in the works, it’s likely Merlin won’t wait long until they announce the next locations for the thrill-based entertainment centers.

Image via Bear Grylls Adventure | YouTube
Stay on top of Orlando news and views. Sign up for our weekly Headlines newsletter.