Las Vegas mega-attraction AREA15 is officially coming to Orlando. Here's everything we know. 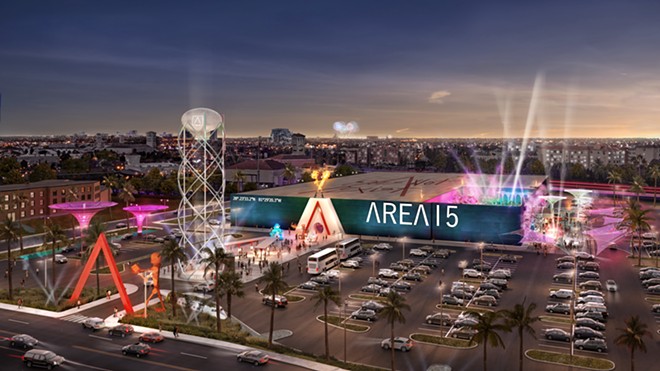 Image via AREA15
Concept art for AREA15 Orlando. I-4 can be seen behind the building with Regency Village Drive in the front.
Earlier this week, a massive robot appeared in a field along I-4 just north of the Vineland Premium Outlets. The robot, Mechan 11, planted the flag announced AREA15 was coming to Orlando. The announcement, later confirmed by a human representative for the Vegas art attraction, comes after news first broke earlier this year that a company affiliated with the group had purchased the long-empty parcel.

The location sits between one of the busiest retail centers in the nation and another newer commercial development with a Cheesecake Factory, a Super Target, and more. It’s also walking distance from the world’s largest White Castle and Portillo’s, both in the O-Town West development just across I-4 from the site. The nearby Daryl Carter Parkway will also eventually have a full interchange with I-4, allowing for more direct access to the site, which is located between Disney World and Universal Orlando. 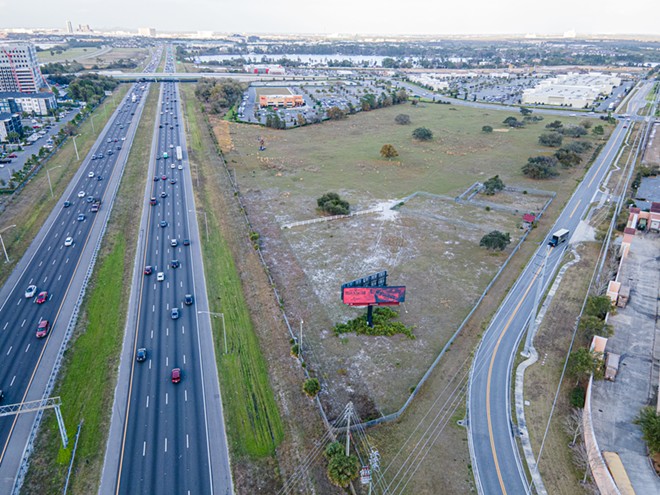 Image via AREA15
The 17-acre field where AREA15 will be located. The Marriott Vacation Club HQ in O-Town West can be seen on the far left. Daryl Carter Parkway near the top of the image will eventually have a full interchange with I-4.
Even before its pandemic delayed opening in Las Vegas, AREA15 was already on its way to becoming a must-do among even in a city known for its excessive entertainment offerings. Like the Orlando site, a giant robot by the same artist heralded the coming venue. Since opening in September of 2020, AREA15 has welcomed more than two million visitors.

With more than a curated list of more than a dozen tenants focused on the latest technology and experience driven entertainment, the 15-acre site has spurred on reinvestments in the surrounding neighborhood and plans are now underway to expand that location.

In speaking to the Orlando Weekly, AREA15 CEO Winston Fisher noted the similarities between the Las Vegas and Orlando sites. Like Vegas, the Orlando location sits beside an interstate with high visibility from the road. It’s also near a major convention center and among other attractions for visitors to enjoy. 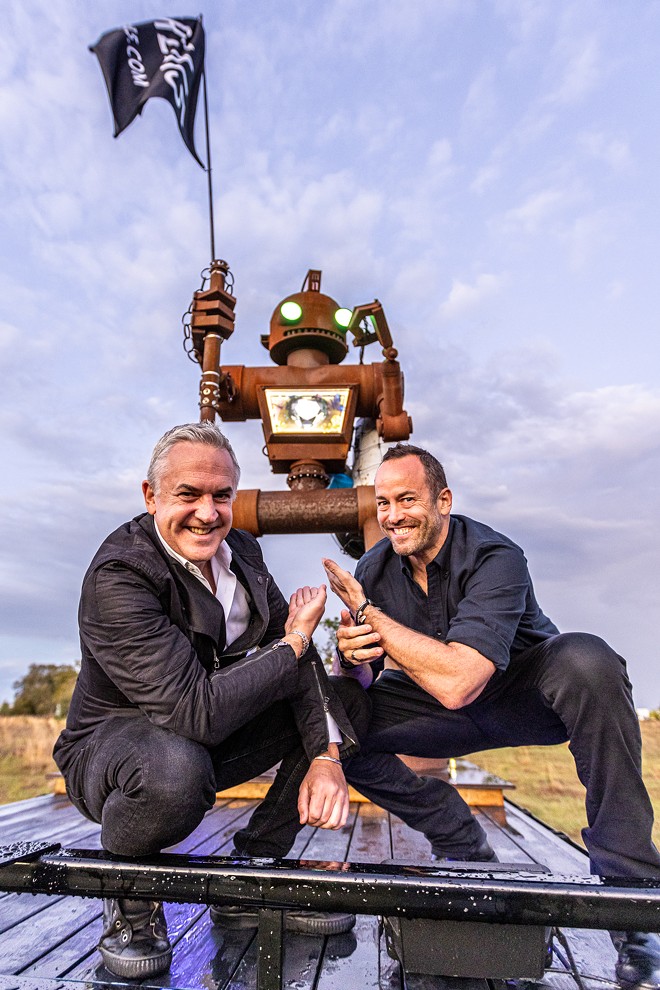 “We're not a single experience. That’s a big part of it. We’re a multifaceted platform. And that means that we have our retail tenants, but we also have Axe Throwing. We've got a barcade [Editor's note: Fisher is using the word 'barcade' as a generic term, not referring to the Barcade® chain of arcade bars]. But we also have tethered VR. We have Chris Wink doing Wink World. Lost Spirits Distillery, and Meow Wolf. So, you have all these different experiences, and some of them change. There are always new touchpoints,” explained Fisher. “But then we have events. And events are a big part of it. We’re as much built for the convention center, which is a big part of our business, as we are for locals. Part of the whole business plan is always providing new things to do. That keeps people coming back.”

While close to the convention center, the location isn’t in an area typically known by locals as a place to seek out art or culture. But AREA15’s Chief Creative Officer, Michael Beneville, is determined to change that and, in the process, hopes to bring more attention to the incredible artists in the region. Having been trained as a formal painter, Beneville points to his childhood experiences of visiting Orlando as being influential upon his career path into the arts.

“I was trained as much by the things I saw here as a child as I was by any painting school I ever went to," he said. 'To distinguish between these things, I think, in this day and age, is myopic and small-minded.”

Beneville added that while they recognize AREA15 isn’t for everyone, they’ve tried to create a welcoming destination. Unlike traditional cultural institutions, which can seem intimidating to some visitors, AREA15 is designed to be a hands-on, welcoming environment.

“I think unpretentious. AREA15 is not about a velvet rope to anything. It's a place that we have designed from the very start as being something that you should walk in the door and feel welcomed; whatever size, whatever creed, whatever you are, you should feel welcomed," he said. "That doesn't mean that everybody will, but that's certainly the safe space that we want to create for people.”

What visitors will encounter within the two-story, 300,000 square-foot structure in Orlando is still a mystery. In leasing materials on the Orlando website, it shows the majority of the spaces are still available for lease. The only named attraction within those materials is Haley’s Comet. This is likely a clone of the dual-track powered zipline that circles the central corridor, known as ‘The Spine.’ 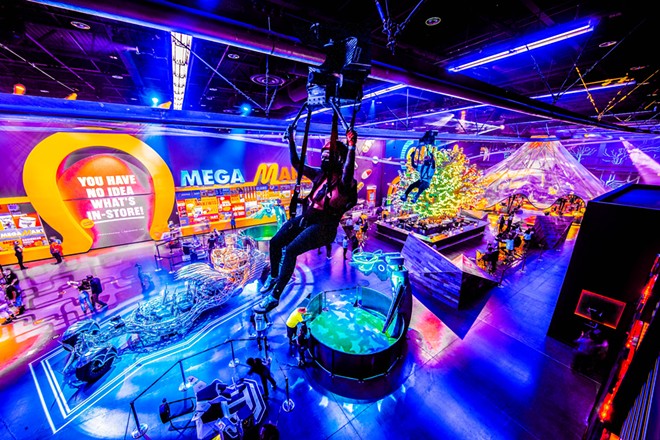 Image via AREA15
Concept art for the Orlando location shows a tethered balloon bar, identical to Liftoff at AREA15 Las Vegas. The tethered balloon bar is from the same makers of the balloon attraction at nearby Disney Springs. Unlike that attraction, where guests stand in a basket below the balloon, the Aerobar lets them sit down, with the option to dangle their feet, as a bartender offers up drinks, all while the balloon rises through the lattice-like structure that stretches more than thirteen stories into the air.

Large sculptures and outdoor experiences are planned, but, like the indoor spaces, few projects have been greenlit just yet. That’s thanks, in part, to the hope that the project will attract local talent.

“I would love to work with local shops and to bring in local culinary experiences. We are in the beginning process of trying to find immersive artists that we can work with on designing some of our space," explained Fisher.

He was quick to note that while local artists will be involved, the overall experience at AREA15 Orlando will be distinctive.

“AREA15 is not going to look like a traditional Floridian experience when you walk in. But we will create the spine and the storefronts. Those will all be unique; they won’t be the same things you see in Vegas," he said. "So, it will be unique to Orlando.”

The 'spine' will also be updated to include a whole different experience than what Fisher calls a "more creative and playful" approach to the audio-visual experience offered within this public area. 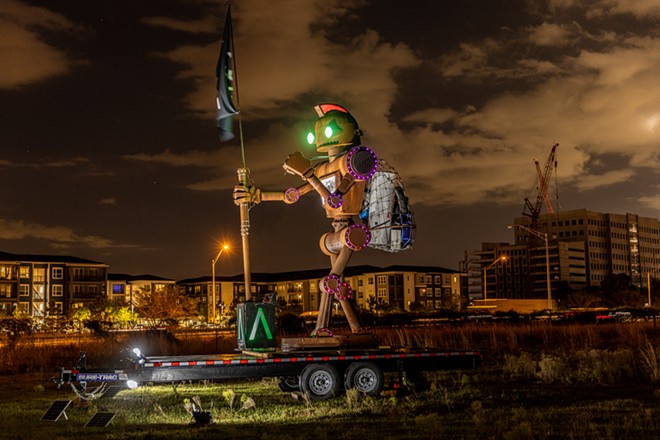 Image via AREA15
Machan 11 on the future site of AREA15 Orlando
Central Florida provides new opportunities for landscape artists and outdoor vegetation-based experiences. Concepts on how to celebrate the region’s extreme changes in the daily weather cycle are already being workshopped, with Beneville hoping to develop a ritual around the summer rainstorms that could help make their occurrence a celebration instead of a problem to ignore.

Fisher explains the reasoning behind choosing the site for their second location. The Orlando site is bordered by nondescript retail and tourist attractions. But those uninspiring genericized surroundings give AREA15 an opportunity to help anchor a fast-growing neighborhood and, in the process, create a new arts district for the region.

“We're kind of in a little bit of a no man's land. AREA15 gets to create its own little immersive entertainment district that will be part of the fabric of Orlando,” he said.

In a prepared statement included in the official press release, Orange County Mayor Jerry Demings pointed to the unique draw a venue like AREA15 will provide to the region.

"We look forward to welcoming AREA15 to Central Florida. In addition to the synergy with our world-class theme park and entertainment industries, AREA15 will amplify the region's efforts to lead in the arts and culture space," Demings shared.

The 17-acre AREA15 Orlando is slated to open in 2024. In the meantime, the company’s first Orlando employee, the massive Mechan 11 robot, stands guard as a testament to the wonderland that will soon call the site home. 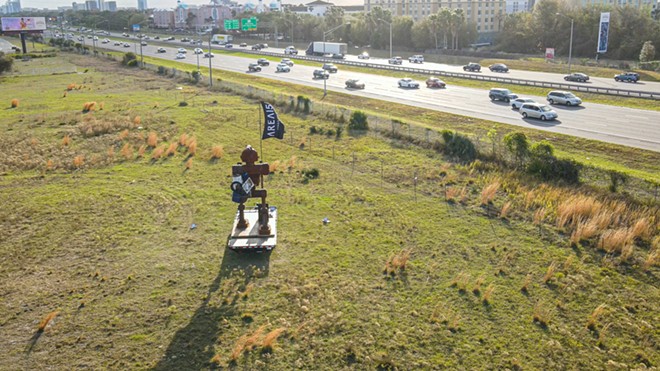