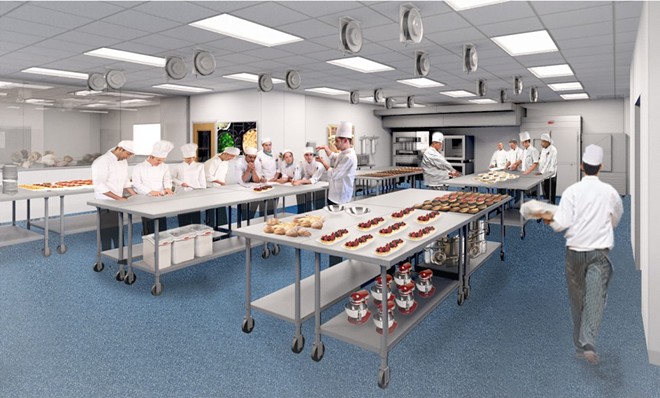 Image via Valencia College
Valencia’s newest campus in downtown Orlando’s Creative Village just received a major donation for its culinary and hospitality arts program. The combined facility with UCF is opening this fall. 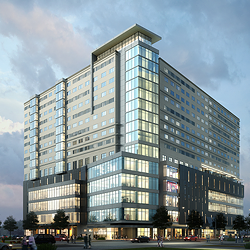 Image via UCF
The UnionWest building in Orlando's Creative Village
UnionWest educational building that is currently under construction. The new facility will be known as the Walt Disney World Center for Culinary Arts and Hospitality, thanks to a $1.5 million donation by the resort.

The donation will fund classroom technology, a demo kitchen and a beverage lab. The demo kitchen is also designed to help teach students how to produce cooking videos, a vital source of income for many chefs.

With a 100 percent graduate placement rate, the Valencia programs are in high demand, and the new facility will allow the program to triple in size.
On top of the financial assistance, Disney World’s culinary team also partnered with the school to update its curriculum. Valencia is now part of Disney’s Aspire program, which allows cast members to work on college degrees with the company paying 100 percent of the tuition up front.

Image via Valencia College
“We couldn’t ask for a more creative and innovative partner than Walt Disney World Resort, and we’re so glad they’ve supported us in our efforts to provide revolutionary learning facilities and educational opportunities,” says Falecia Williams, campus president of Valencia College’s West and Downtown campuses. “Our latest endeavor to reimagine our culinary arts and hospitality campus and programming will be a transformational experience for our current and future students.”

The updated culinary arts and hospitality programs at Valencia’s Creative Village campus will offer degrees, certifications, and training programs. More than three dozen degree programs will be offered at the new campus through Valencia and UCF. An estimated 7,700 students are expected to attend classes there.