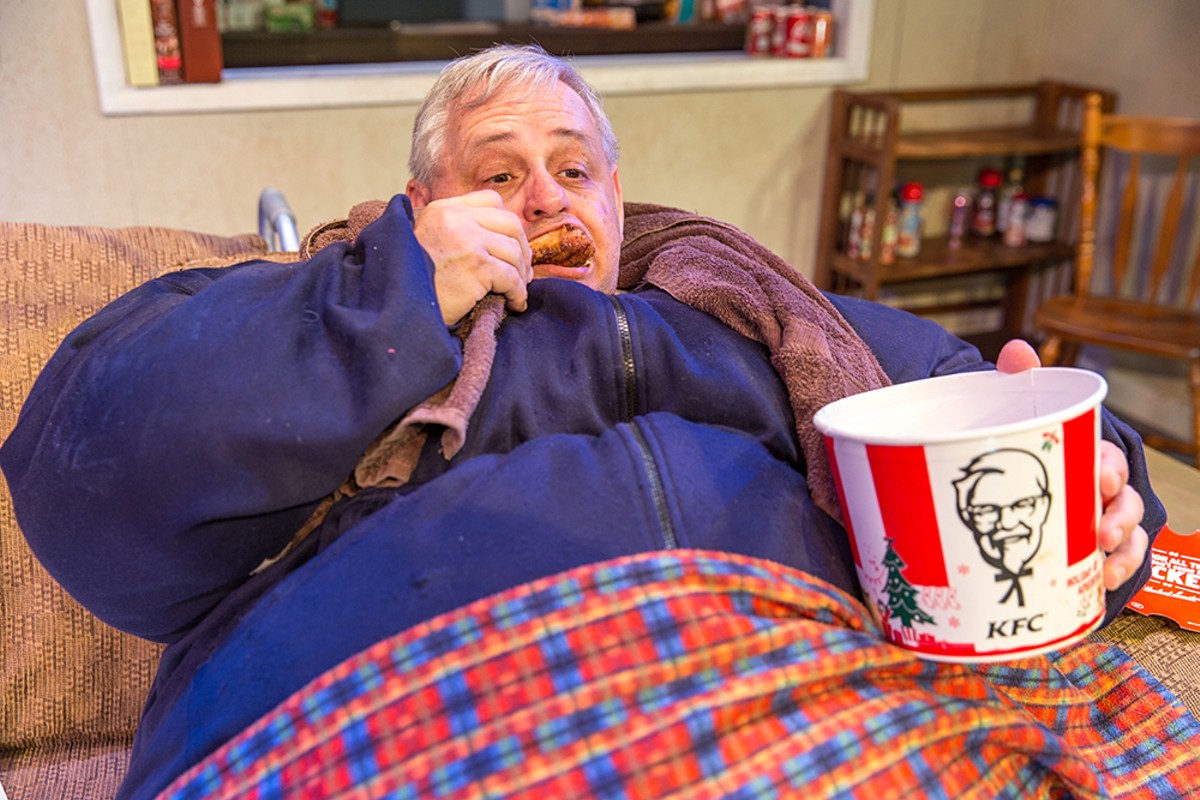 The Garden Theatre's new production of Sam Hunter's award-winning off-Broadway drama The Whale brings together three heavyweights of Orlando theater – director Rob Winn Anderson, producer-actress Beth Marshall and actor Michael Wanzie – to tackle some hefty subjects, which they explored with me in an interview before their March 18 opening.

Wanzie, who plays the protagonist, Charlie, describes him as an obese online instructor who is "basically eating himself to death, out of grief more than anything else, because he's had loss in his life. He knows he's dying and wants to reconnect with his teenage daughter. When she comes, she's less than easy to get along with. And in the middle of it all, they throw in a Mormon missionary just for good measure."

Anderson read the play first and brought it to Marshall, with whom he previously partnered on Alice Lost in Wonderland, because he "knew that it was in Beth's wheelhouse and that she would love it." It turns out she was already familiar with the author, even though she didn't realize it: "I had actually read Sam Hunter's works in something that was similar to Play in a Day. I just learned last week and did not realize that two of the four [plays] I picked [in a blind judging] were Sam Hunter's 10-minute shorts."

Assembling the ensemble, which includes Rachel Comeau, Jamie Middleton and Anthony Pyatt Jr., took some effort ("I'm sort of known for a lot of callbacks," Anderson admitted), but casting the larger-than-life lead was an even bigger challenge. "You have to be realistic about the fact that you're not going to cast a 650-pound man," says Anderson. "So there's the challenge of not only finding an actor who embodies the role, who is a great actor, but also physically you can buy. You don't want some peanut head inside of the suit."

Of Charlie's prosthetic body suit, which was designed by Marcy Singhaus and Douglas White, Wanzie says, "It's not as heavy as I thought it would be. I don't think this one is more than about 30 pounds or so. It's really time-consuming and methodical what they did: They created pockets the way that skin would fold, and then went back and stuffed those pockets with the fluff from inside pillows. So it's not the bulky weighted-down foam. But when it's on it doesn't breathe at all; you're only in it for three minutes and you're sweating. It's worse [than theme park costumes] because the Disney and Sesame Street costumes aren't touching your skin. There's room to breathe inside those costumes."

Opposite Wanzie in a brief but impactful cameo is Marshall in a rare self-produced onstage appearance. "The last thing that I performed in that I produced was Chick in Crimes of the Heart in 2010, and not only is that the last thing, it's the only thing," Marshall says. "This is the 60th Beth Marshall Presents show, and of all of those shows, this is the second one that I'm acting in."

Believe it or not, The Whale will mark Marshall and Wanzie's first scripted scene together. "I've directed him, he's directed me, I've produced him, he's produced me," Marshall recalls. "We've hosted together countless times, we've done charitable events, etc. etc. We did The Eight: Reindeer Monologues together at the Civic Theatre, but we were never on stage together. We also did Theodora, She-Bitch of Byzantium ..." (here Wanzie interjects, "I don't think either of us said a word to each other in that play").

In an era when sensitivity about body shaming in on the rise, while reality shows like My 600-lb Life run on TV, The Whale is wading into tricky waters, starting with its title. But according to Wanzie, the name derives from references to Moby-Dick and the Biblical Jonah: "There is a reason beyond the obvious that the title is The Whale. It's not just a clever play on a fat person."

Similarly, Anderson shares that Hunter "had the idea for the story first, and then the 650-pound aspect came into it. He said the reason he did that was because he wanted the audience to immediately have a distance from the character. He knew that there would be a reaction and something people couldn't necessarily relate to, and he wanted that distance so that they could then learn to understand this man. Yes, his heaviness is important, but you kind of forget about it once it starts. It's really about the relationships that this man has."

If you think all that sounds pretty complex compared to the family-oriented fare the Garden Theatre is known for, that's intentional. As consulting artistic director for this season, Anderson's goal is "to make them do riskier things. We have slowly built it up with the Winter Garden audiences to trust us a little bit." And if Marshall and Anderson have their way, shows like The Whale could help change the complexion of Winter Garden's theater scene: "The whole area is growing. There's an influx of younger people, so we want to keep up with that. We don't ignore the tried-and-true audience, but we want to give them a challenge."