The shadowy world of Orlando's theme park urban explorers: Are they legends or are they idiots? 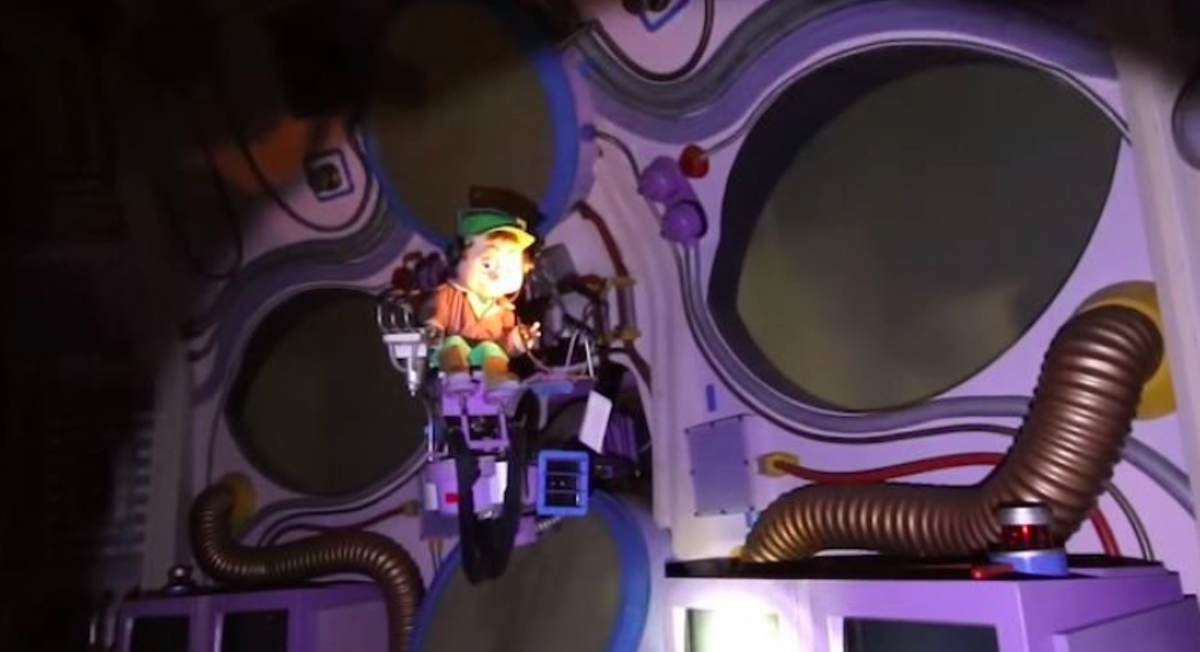 Late last year, the internet lit up with claims that Buzzy, the audio-animatronic star of Epcot's long-closed Cranium Command show, had been stolen from the decommissioned theater where he'd been gathering dust for a decade. When police reports revealed that Patrick Allen Spikes, who posted backstage photos on Twitter as @BackDoorDisney, was questioned in connection with the disappearance of Buzzy's clothing and hands, a bright light was directed on the shadowy yet increasingly popular subculture of theme park urban explorers (aka "urbex").

Few know this perilous pastime better than YouTuber Matt Sonswa, who has gained notoriety by posting videos from inside abandoned attractions – including the last known footage of Buzzy inside Cranium Command – earning himself two lifetime bans from Walt Disney World in the process. Last year, we met in a public park to discuss his clandestine career, and more recently I caught up with him in Celebration, where he and fellow urbex Jake Williams of Bright Sun Films were greeting fans and followers.

A native Floridian from the Fort Lauderdale area, Sonswa started his urban explorations shortly after moving to Orlando in early 2017. "I've always sort of pushed the limits. We used to break into abandoned malls to hang out and mess around, but I never thought about filming places," says Sonswa. It wasn't until he contacted the vlogger "Florida UrbanX" about an abandoned location they had documented that he considered trying it himself.

His first destination was Discovery Island, Walt Disney World's former animal habitat floating in the middle of Bay Lake. "I came across the article by Shane Perez [shaneperez.blogspot.com] on his expedition to Disney's Discovery Island," Sonswa says. "I searched high and low on the internet for any type of video of the island's current state, and there was none whatsoever. So I figured I should go see it and film it myself." Sonswa describes the experience as "like stepping into a time portal back into 1999, everything is just left untouched. That's the beauty of it being on Disney property, nobody can get there."

The resulting YouTube video garnered more than 130,000 views, fueling Sonswa's exploratory ambitions, and he made a return visit to the island in 2018. In between, he was caught in off-limits areas at Epcot ("a lady tried to bring me to the security office in the back of Epcot ... I took off running and sprinted 40 yards through the back of Epcot and found my way back into the park through a maintenance walkway") and at Disney Quest, prior to the Disney Springs arcade's demolition.

"I filmed it and I got out – that's when a security guard approached me and asked, 'Who are you, how did you get in there?'" He was charged with felony burglary (that charge was later dropped) and misdemeanor trespassing, and permanently banned from the resort. Despite that, he has recently posted footage from the peak of the Magic Kingdom's Big Thunder Mountain and from inside the gutted hull of Walt Disney's private airplane.

Reactions to Sonswa's YouTube videos range from "You're a legend, thank you so much" to "You're an idiot, you suck." Likewise, his family is "not too thrilled about it," especially since his arrest: "My brother bailed me out. Me and him were never on good terms, so that was definitely a fun car ride home." Sonswa adds that he wouldn't recommend the urbex experience to most. "It's been kind of a headache in terms of getting arrested. It's definitely not worth it."

Regarding the #FindBuzzy fervor, Sonswa says, "I'm sure it's very frustrating for Disney fans that the company was not able to secure the animatronic into the Walt Disney archives sooner. I'm just glad I was able to document and share the attraction when I did. It really highlights the fact that urban explorers like myself only strive to preserve history. Sadly, when it comes to 'Disney's Magic,' too much curiosity will always get the best of you."

For another perspective, I turned to Dave "Hoot Gibson" Ensign, the godfather of Disney urban explorers, whose exploits with the late Ed "Thunder Chief" Barlow inside Epcot's extinct Horizons ride were featured in the 2015 documentary The Dark Side of Disney. Ensign says he "feels sorry" for modern Disney urbex "because they missed out on the really cool attractions built in a time when safety wasn't a concern and you could get away with so much more," but asserts that "urban exploring and blatant theft are two different things. Explorers usually respect the places they go and don't disturb the place or steal million-dollar figures." However, Ensign also says that "the theft of attraction props [has] been going on since the first shovel of WDW dirt in 1969," and that "the real problem Disney faces these days isn't the kids stealing props. It's the very wealthy who are collecting this stuff and paying huge amounts of money for anything these kids can steal."

And as for Buzzy himself? According to Hoot's sources, the figure was removed by Walt Disney Imagineering and facility maintenance: "They had an order to remove him so people wouldn't hurt themselves by sneaking in there and climbing on the sets. Unfortunately, nobody told operations or security who found it missing and assumed he'd been stolen." Since Disney refuses to comment on the matter, the mystery of the missing animatronic must end there, but it's only a matter of time until the next urbex uproar ignites online.

NOTE: Neither this author nor Orlando Weekly condone trespassing or any other crime. Don't try this at home!