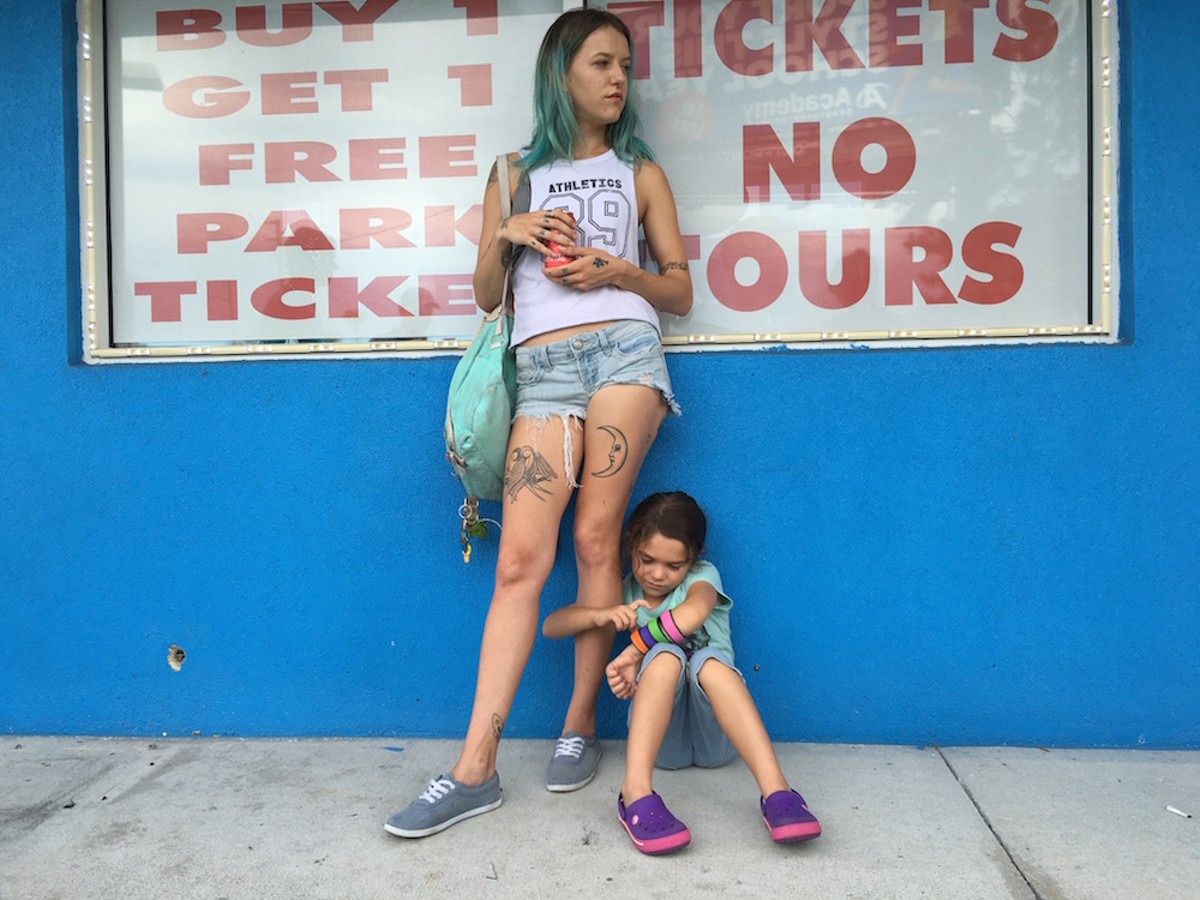 Imagine you are 6. You're old enough to know you're poor but too young to understand what your mom does to pay for your $38-a-night home at the Magic Castle motel. You don't know when or what you'll eat next – it could be a waffle with extra maple syrup, a slice of plain pizza (pepperoni costs money) or a loaf of bread out of a charity van. You flip the bird at tourists who swarm Kissimmee's garish strip of dilapidated attractions along Highway 192, and you know more about the chaos of adulthood than you should. Still, between the poverty and the uncertainty, there are simple moments of wonder. Every night around 9 p.m. outside your window, glittering bursts of color explode and melt into the stars. The Disney fireworks aren't meant for you ­– they're for the people who paid hundreds of dollars to goggle at them with a giant turkey drumstick in hand. The joy you gain from gazing at fireworks miles away is borrowed, just like everything else on 192 – from the kitschy Orange World and discounted souvenir stores to the budget hotels meant for bargain vacations that actually house hundreds of low-income families. This borrowed place isn't intended for childhood, but 6-year-old Moonee, protagonist of The Florida Project, doesn't know that and is probably too busy getting into spitting contests to care.

The Florida Project, directed by independent filmmaker Sean Baker, follows the antics of Moonee (Brooklynn Prince) and her mother Halley (Bria Vinaite), an unruly, teal-haired ex-stripper who struggles to scramble together enough cash for rent each week at the Magic Castle. Bobby (Willem Dafoe) is the goodhearted but overwhelmed manager who watches out for the kids and even some of the adults in this misleadingly named purple motel, often confused by foreigners for the actual Magic Kingdom. While the adults seem to exist in clouds of forlorn cigarette smoke, cute Moonee and her motel-living cohorts, Scooty (Christopher Rivera) and Jancey (Valeria Cotto), beg spare change off tourists, drop dead fish in the motel pool and prowl through abandoned condo developments. Most Central Floridians would recognize Moonee's milieu: Orange World, the wizard souvenir shop, the Twistee Treat cone and the omnipresent little plush Orange Bird toys. To survive, Halley and Moonee sell wholesale perfumes to tourists at fancier hotels – until that doesn't work, forcing Halley to turn to other schemes. Suddenly, the film that moved idly through golden puffy sunsets and endless rainbows takes a turn to a darker reality. 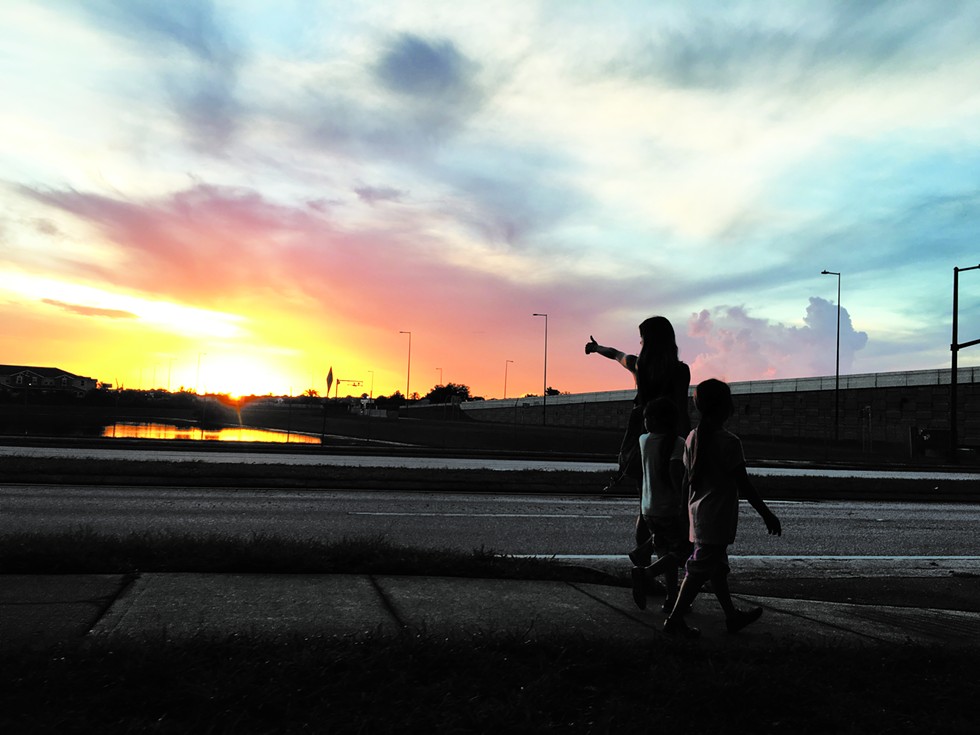 Halley, Moonee and Jancey hitch a ride (The Florida Project)

The Florida Project doesn't exist in a vacuum – for Dawn Spencer, an extra in the movie, it's a bitter truth she lives every day.

Spencer and her 9-year-old twins have made their home in the Palm Motel off 192, just six minutes away from where the film was made. She and her daughter got paid to appear in a scene at the Community Hope Center, a place on 192 she actually frequents for help. The family has lived in motels for more than three years now. Even though she makes money working a full-time job at a department store, it's hard for Spencer to apply for apartments because of previous evictions on her record. Saving up for a security deposit and first month's rent when she's paying more than $800 a month for a motel room also hampers any chance Spencer and her children have of finding a stable dwelling. In the quintessential American vacation destination, mere miles away from the "happiest place on Earth," it's jarring to know that families like Spencer's can be trapped in cycles of poverty for years and even generations, according to homeless advocates.

"I wish I could say that you're not always stuck, that there's a way out – I haven't found one yet," Spencer says. "I'm the most optimistic person, I always look at the bright side, but it's been really hard – it sucks. I hope the people who see this movie know that they're not alone. There's a community here. You will get help if you keep fighting for it."

Sean Baker was not the first person to walk into the Community Hope Center looking to tell the story of motel families.

The Rev. Mary Lee Downey, founder and executive director of the organization, says in the five years they've been open, documentary filmmakers and others have sat inside the small conference room decorated with a dove mural to ask her about the homeless problem in the heart of Central Florida's tourism district. Some never made it past the financing stage, while Downey felt others sensationalized the problem. So when Baker and producer Chris Bergoch stopped by three years ago, Downey had no idea what would come of their meeting.

The eventual result was The Florida Project, Baker's first Cannes selection and his first film since his groundbreaking 2015 iPhone-shot film, Tangerine. The Community Hope Center hosted casting calls for the movie and is featured in The Florida Project, as well as Downey's staff and some of her clients, like Dawn Spencer.

"They were adamant about wanting to give opportunity for employment," she says. "They were truly invested in this community and wanted to tell a story that was compelling. There's probably people who think this shouldn't have been made because we don't want tourists from Iowa knowing we have homeless people. But I think this is an opportunity for us to face what's been in front of us for a very long time and have an honest discussion about it. Let's do something to help the homeless people instead of trying to hide them."