The Baymax meet-and-greet moves to Epcot, kicks out pal Hiro 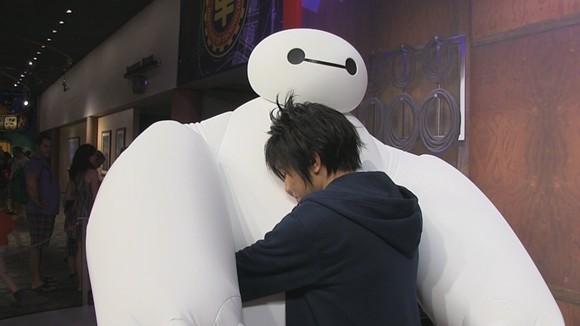 Screengrab via YouTube (Attractions Magazine)
Star Wars has taken over Disney’s Hollywood Studios in many ways over the past few months, but one of the most impactful is the new Star Wars Launch Bay that replaced The Magic of Disney Animation.

The good news is now at least half of the duo is back, Baymax, the overstuffed health robot that is one of the main characters in last year’s hit Big Hero 6.

Baymax is now meeting guests at Epcot’s Character Spot near Innoventions West (which, is currently closed with no timeline of reopening). The new meet-and-greet keeps the same garage meets high tech lab as the former DHS one, but sadly Hiro is now missing.

The former meet-and-greet involved a short conversation with Hiro before you posed for a pic with both him and Baymax. With the inflated costume, Baymax has even less mobility than most characters at WDW, causing the new meet-and-greet to lose some of its luster. Now, instead, of Hiro helping you pose and meet Baymax, you have cast members. The absence of Hiro highlights Baymax’s mobility issues.

The new meet-and-greet is across the breezeway from the normal Character Spot. The new Baymax exclusive Character Spot fills part of the former Innoventions West space.