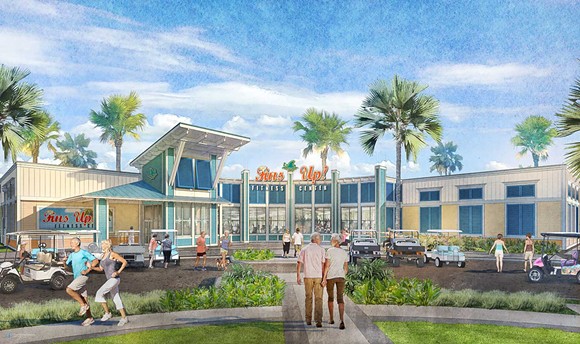 The list is based on numerous analytics including unique pageviews and homebuyer inquiries. Since beginning the list in 2013 one community has claimed the coveted top spot every single year; The Villages just south of Ocala. The mega-community has become the industry leader in what an active retirement community should be, but this year it slipped all the way down to #7.

Sure, there aren’t live buffalo or a replica Spanish cathedral, but Latitude Margaritaville has taken many of the growing pains encountered by The Villages and improved upon them, such as a private beach club on the shores of the Atlantic Ocean and pet-friendly amenities throughout the community.

Image via Latitude Margaritaville
When Latitude Margaritaville Daytona Beach was announced last year, the bold, highly-themed retirement community was one of the most daring ventures yet to feature for the Jimmy Buffet-inspired brand. With daily shuttle service to nearby beaches and resort style amenities, the community has seen impressive sales with more than 330 homes already sold according to the Daytona Beach News-Journal, but with more than 6,900 lots there’s still plenty of growth yet to happen within the community.

The Margaritaville brand has been in the midst of a massive expansion in recent years that includes a new $750 million resort complex in Kissimmee to a Manhattan hotel. A new upscale select-service hotel brand, Compass, was recently announced and a new line of restaurants have seen multiple openings across the country including LandShark Bar and Grill, which opened along A1A in Daytona Beach first of this year.

Latitude Margaritaville retirement communities, which are a partnership between Jimmy Buffett's Margaritaville Holdings LLC and Minto Communities, already has two other communities; one in Watersound, Florida (west of Panama City) and Hilton Head, South Carolina.

Other Florida communities to make the 55Places.com Top 100 list include Ocala’s On Top of the World (#2), Kissimmee’s Solivita (#8), and Leesburg’s Royal Highlands (#26). Lake County saw one of the largest showings of any region in Florida with 7 communities on the list. Altogether more than 25 Florida communities made this year’s list.