"And now my children, it's time for Horrorscopes. Periscope down."

The hooded creature perched on a gargoyle-festooned throne, looking like a B-movie hybrid of the Cryptkeeper and Dr. Doom, theatrically pulls down a periscope from out of nowhere — with attendant submarine sounds. As dry ice billows through the TV studio set, he pulls out a tombstone and starts reading aloud absurdist predictions.

"Pisces: Your dog's rising sun is indicated by his back leg. Cancer: Don't lick food from a stranger's beard. Gemini: Beware if a man bleeding from the ears asks you to sign a bank note. ... And finally, Leo: Beware if your blind date has a mole the size of Ernest Borgnine. We'll be back."

Tucked away at the half-hour mark of the "Golden Age of Horror Hosts Vol. 1" video on YouTube, this strange and funny and compelling video was our introduction to the GraveMaster.

"Horror hosts" are a uniquely American television phenomenon: creepily attired comics and cut-ups who'd crack jokes over bad horror flicks for local TV stations eager to fill airtime, movie quality be damned. It's a proud, postmodernist tradition that goes back to Zacherle and Vampire in the 1950s. But for every horror host who cracked the national consciousness like Elvira or Svengoolie, there were countless regional fiends bubbling under on the far ends of the dial. Why, nearby Tampa even had Dr. Paul Bearer, a cadaverous undertaker who'd dispense groan-worthy puns at a machine-gun pace in between equally painful horror films.

But back to that GraveMaster clip. Though brief, it's impressive stuff among the usually lo-fi standards of the horror host genre, and it's more of a madcap romp than some of his peers' work, with peppier pacing and lots of sight gags. The GraveMaster's makeup and costume are top-notch; the set design and production is haunted-house worthy; the puns are appropriately corny, Letterman-esque fun (there's a quip about a new kid's toy, the "Mattel Quicksand Box," that is pure demented dad-joke territory). And the GraveMaster even gives away tickets to the local premiere of a "hot new film" called Twin Peaks: Fire Walk With Me.

So far, so good, right? What really brought us out of our scrolling stupor, though, was when the GraveMaster announced a trivia contest in which the winner would score a glow-in-the-dark shirt with his ghoulish mug on it. And the address he directed answers to be sent was the WKCF TV 18 studio on Courtland Street ... right here in Orlando.

For indeed the GraveMaster was a product of the City Beautiful. 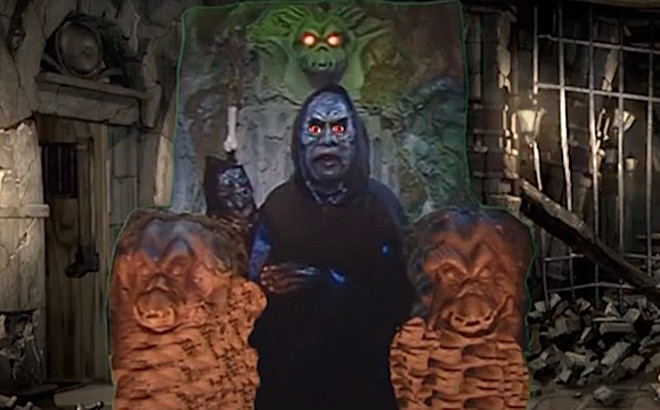 Friday Nights With the GraveMaster broadcast for a few halcyon months in 1992, weekly at 11:30 p.m. out of the Channel 18 studios. Though apparently canceled after one season to make way for syndicated sitcom reruns (the horror!), the show was ghastly fun right out of the gate. And — given the trivia, caption contests and amount of viewer mail read on the air — it found an audience of weirdos, horror hounds and insomniacs from day one.

But sadly, here's not much information on the GraveMaster to be found on the internet — a sparse IMDB entry here, short capsule bios on a couple of horror host-centric websites there, and a much better website dubbed "In the Night" that abruptly disappeared off the internet. Even worse, no full episodes are readily available, just a handful of compilation clips put together by discerning TV junkies. But the clips out there in YouTubeland hint at sublime, "how did this even get on TV?" mayhem. We watched them all religiously.

And what mayhem it was! The GraveMaster, in the course of just a few months, was attacked by the Creeping Unknown, tormented by a miniature hand puppet of himself doing awful impressions, hosted a Christmas episode and even brought in the winner of the first (ahem) "Bithlo Talent Contest." (Who then had a tragic zipper accident.)

Who was responsible for this? We know a little.

The man behind the GraveMaster's frightening visage was Tim Kincaid (né Trombitas). If that name sounds familiar, it's because his daytime gig was as Ranger Bob of the very popular local children's show Ranger Bob's Buckaroo Club. Sets and special effects were handled by Pat "Fleagore" Tantalo, an industry vet who went on to do special effects for big-time motion pictures like Bug, A Walk to Remember and Ace Ventura: Pet Detective.

Trombitas is now retired from television, walking a very different path as both a man of the cloth in Winter Garden and a military chaplain in Apopka. Attempts to reach him to talk about that role were unsuccessful — which is not entirely surprising, given his current calling.

Tantalo, meanwhile, sadly passed away in 2017. But at the 11th (witching?) hour, we did manage to track down the man credited as both "Floor Vampire" and "Ghost Writer" in the end credits: Pat Moran. Moran, now a staff writer at Charlotte, North Carolina's alt-weekly Queen City Nerve, related a tantalizing anecdote during a brief exchange that tied the show in with another lost landmark of Orlando fright: "At the time of GraveMaster, I also worked at Orlando's Terror on Church Street, mostly as Dracula," Moran told us, "so I procured a few coffins for the show."

We were unable to coordinate with Moran for a longer interview before this issue went to press. So we're left with more questions than answers, and only a small handful of video clips, stray photos and an ad from the Sentinel's TV listings on the web as tangible evidence.

More than likely the GraveMaster is buried forever. There will be no Elvira-style comeback. The coffin is well and truly shut on an Orlando original. And yet, if you point your ear toward Courtland Street this Halloween night, legend has it that you can still hear a ghostly voice whisper, "Good night, sleep tight, and don't let the bedbugs — or unknown creeping bugs — bite."