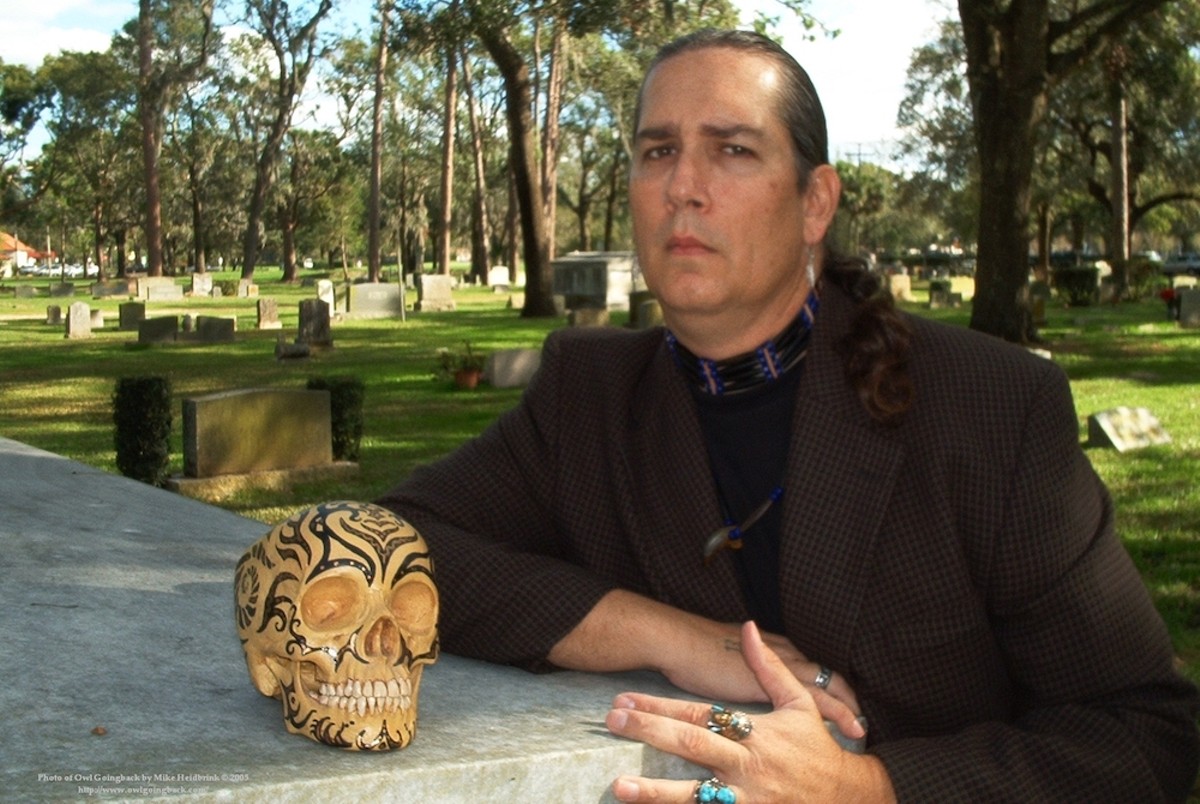 A lonely cemetery on a March day seemed an appropriately spooky place in which to interview horror writer Owl Goingback. Gravestones and statuary standing as silent sentinels, a steady breeze making the pine needles in the trees at the cemetery's edge whisper softly like the voices of ghosts – it felt like the ideal setting for meeting an author who traffics in the supernatural.

Waiting to meet him outside my car, however, the chill was a little more literal than I'd imagined; I was shivering as Goingback pulled up in his car. Through the window, I could see his trademark long gray braid, and on the steering wheel I noticed the chunks of turquoise jewelry adorning his hands and wrist.

He greeted me graciously but quickly sensed something was off and suggested we relocate someplace warmer, which turned out to be a Starbucks in Winter Park Village. Not exactly the eerie atmosphere of a graveyard, but it was more conducive to conversation. For a man who makes a living scaring the hell out of people, Goingback is good at making others feel at ease.

Goingback, who is of Choctaw and Cherokee heritage, made a name for himself in the world of horror fiction with frightening stories rooted in Native American history, folklore and mysticism. Evil Whispers, set outside Orlando, involves an ancient sorcerer killed by Seminole Indians who is able to return to malevolent life. In Crota, authorities think the mutilated bodies they've discovered are the work of a bear, while the local game warden (who happens to be Native American) suspects it's the great beast, Crota, awoken from hundreds of years of sleep. Crota won Goingback the Bram Stoker Award for best new novel and launched a career that today includes 10 novels, numerous short stories, magazine articles, scripts, comics and even an award-winning children's book, Eagle Feathers.

Goingback has a robust following – not just in the horror and fantasy community, but also among Orlando readers, who voted him Best Local Author in Orlando Weekly's 2019 Best of Orlando Readers Poll. An attentive audience showed up at a recent reading at the Orlando Public Library to listen to him discuss the innate loneliness of monsters (something he says he relates to) and his love of Native American myth. What struck me most during his talk was his gentle persona – the same persona that was concerned about my comfort at the cemetery.

Goingback speaks softly about his childhood. "[My mother] served in the military and we jumped around a lot; we lived in a person's attic for a while and then a basement. It wasn't until I was 5 that she remarried and we lived out in the country on five acres. No kids to play with. No neighbors." Goingback had to create his own entertainment. He found solace in fiction – particularly fantasy and adventure books by writers like Ray Bradbury (Something Wicked This Way Comes) and Edgar Rice Burroughs (Tarzan, John Carter of Mars).

"The only place in town to buy books was the Rexall Drugstore," he recalls. "It wasn't until The Exorcist came out that I started seeing books being sold other places." It was at the drugstore that Goingback devoured monster magazines like Famous Monsters of Filmland.

"These magazines really captured the imagination of kids like me and I felt these monsters, like me, were lonely but also probably misunderstood," he says. Interesting that Goingback's empathy, even as a young man, extended to creatures designed to evoke revulsion and horror.

Goingback joined the Air Force at 17. After his time in the military, he opened a restaurant, and after closing time he began writing stories. After his debut novel snagged the Bram Stoker Award for best first novel, he went on to be nominated twice for best novel – both times competing against Stephen King.

Before writing full time, Goingback was caretaker of the Greenwood Cemetery, the oldest one continuously used in Orlando.

In the midst of writing and winning awards, Goingback and his wife were looking for a place to plant roots. One of his childhood heroes, legendary science fiction and fantasy writer Andre Norton (Witch World saga, Sargasso of Space), would affect not only his writing, but also his home life. "Andre Norton was one of my favorite science fiction writers when I was a kid," he remembers. "Years later, I was asked to aid her at a conference and from there we became friends. When Nancy and I were looking to settle down and raise our sons, we visited Andre in Winter Park. We just decided on that trip to stay and we never looked back."

Once in Central Florida, Goingback wrote and took on various jobs, including caretaker of the Greenwood Cemetery, where he served for seven years. Greenwood is Orlando's oldest continuously used cemetery, established in 1880 and covering 82 acres. Many of Orlando's most prominent citizens are interred there. One of his most challenging assignments at Greenwood: preparing graves for the victims of the Pulse shooting.

"We buried four of the Pulse victims at Greenwood, three on the same Saturday. It was challenging to make sure the families had the privacy they deserved during the burial services, when so much of the world was focused on Orlando at the time, but the press was very respectful of the situation. We only caught one pair of reporters trying to sneak in and photograph the burials, and they were quickly escorted off the property," Goingback says. "It was amazing how the Central Florida community pulled together in the days following the tragedy, with many people stopping by the cemetery and offering to help in any way possible."

Today Goingback writes full time. His books and stories are used in reading programs in public schools, colleges and a youthful offender program at the Orange County Corrections Facility in Orlando. He has lectured on Native American customs and folklore throughout the country.

The first piece of fiction I read of Goingback's wasn't one of his horror novels, but a short story called "Grass Dancer," which has been extensively anthologized. It tells the story of Roger Thunder Horse, a Native American teen who is drafted into service during the Vietnam War. His presence fades in and out of his family's life stateside and these visits foreshadow his ultimate death on the battlefield. His surviving brother Jimmy, who is disabled, dons the special regalia Roger passed on to him and dances during a pow wow. As Jimmy dances, painfully, his legs miraculously straighten, his back realigns and grass grows where he steps.

While the monsters that permeate his horror fiction underscore man versus nature and good versus evil, Goingback weaves Native American folklore into the present action of the stories. Ancient violence re-emerges into today's suburban landscape and exacts a heavy cost; ancient evils never really die.

Florida's sunshine, beaches and theme parks are no distraction to Goingback. He's more interested in the state's cultural underbelly.

"We've got an endless supply of stories about ghosts, haunted locations, witches, skunk apes, giants, water monsters and UFOs. It's a state with spooky swamps, islands once littered with human bones, ancient Spanish forts, Civil War battlefields, a Coral Castle and even a spiritualist camp," Goingback says. "There's definitely a lot here to spark my imagination."

What scares Goingback himself? "Life," he answers. "It's why I don't write about serial killers or shooters or stuff like that. Stories about werewolves, vampires and monsters are a place to escape all that is happening in the news and real life."