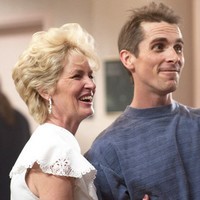 It's a good thing that we're discussing who we believe actually deserves these awards, as opposed to merely predicting who will take it home, because I'm just about sick of lamenting the staggering amount of acclaim that perfectly fine character actress Melissa Leo is earning for her good-not-great work in The Fighter. [EDITOR'S NOTE: Don't be! Lament away!]

The whole Supporting Actress category is a headache and a half, so let's just start there. Who do I think most deserves recognition? Hailee Steinfeld, who gave a terrific lead performance in every scene in the Coens' True Grit. Alas, industry politics have forced her to make do here with a consolation nod for being an up-and-comer, and that, my friends, is a pity.

After that, I would favor Amy Adams' alternately gentle and fiery turn in The Fighter over the overwrought Melissa Leo. Strictly here on the coattails of her film is Helena Bonham Carter, whose perfectly decent work in The King's Speech surely didn't rank among the year's five best -- say, Lesley Manville in Another Year. But while Sony Pictures Classics failed to drum up interest in that film, they did get a nice little rally going for Jacki Weaver and her devious little performance in Aussie crime drama Animal Kingdom. She's just happy to be here, and we're just happy for her.

That leaves us with Best Supporting Actor. While his work may be every bit as showy as Leo's, Christian Bale does deliver a more nuanced and charming performance than hers, so I don't feel so bad that he's got that shit locked up. It's a shame that The Kids Are All Right (intentionally) fails to bring closure to Mark Ruffalo's character, because his performance is just as winning as Bale's and equally vital to that film's family dynamic.

If I thought more of Winter's Bone, or had seen it more recently than last March, then I'd probably go to bat more for John Hawkes' understated work there. (Let's face facts, though: he's basically this category's Jacki Weaver.) Jeremy Renner was fine and all in The Town, a solid drama that otherwise went snubbed, but he's confined to a relatively easy "stubborn and trigger-happy" mold for his role. That leaves Geoffrey Rush, plenty charming in The King's Speech, if carefully calculated to be just that. Alas, if he had only played a crack-addicted speech therapist, he might've had this one in the bag.