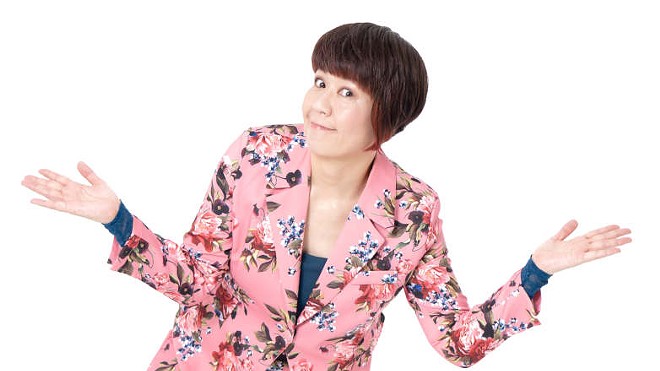 It took Yanomi Shoshinz — the joyful Japanese physical performer best known as Miss Hiccup — seven years, two COVID tests, and a 15-hour flight to get back to the Orlando Fringe, and it’s not a second too soon.

She’s returned to try out her first ever English-language stand-up comedy show, and she needs make no apologies for her Japanglish in this funny and fascinating crisis-cultural exchange.

Did you know that the majority of Japanese are non-religious but still hold their wedding ceremonies in temples and churches (because they look fancier) where that the center aisle is referred to as the “virgin road?” Yanomi, who has professionally emceed over 500 Japanese weddings, shares those tidbits, as well as anecdotes about flower girl failures, doggie ring bearer disasters, and the dubious origins of various time-honored wedding traditions. In doing so, she illuminates the interesting similarities and differences between American and Asian matrimony methods.

Of course, flatulent wedding speeches and precocious reception toasts translate into any language, and Yanomi generates guffaws without words when getting tied up in knots with the aid of a volunteer while educating her audience on the arm twisting intricacies of Japanese matrimonial protocols.

I encourage all comedy lovers — married and single — to welcome Yanomi back with warm laughter … just don’t offer to play matchmaker for her!