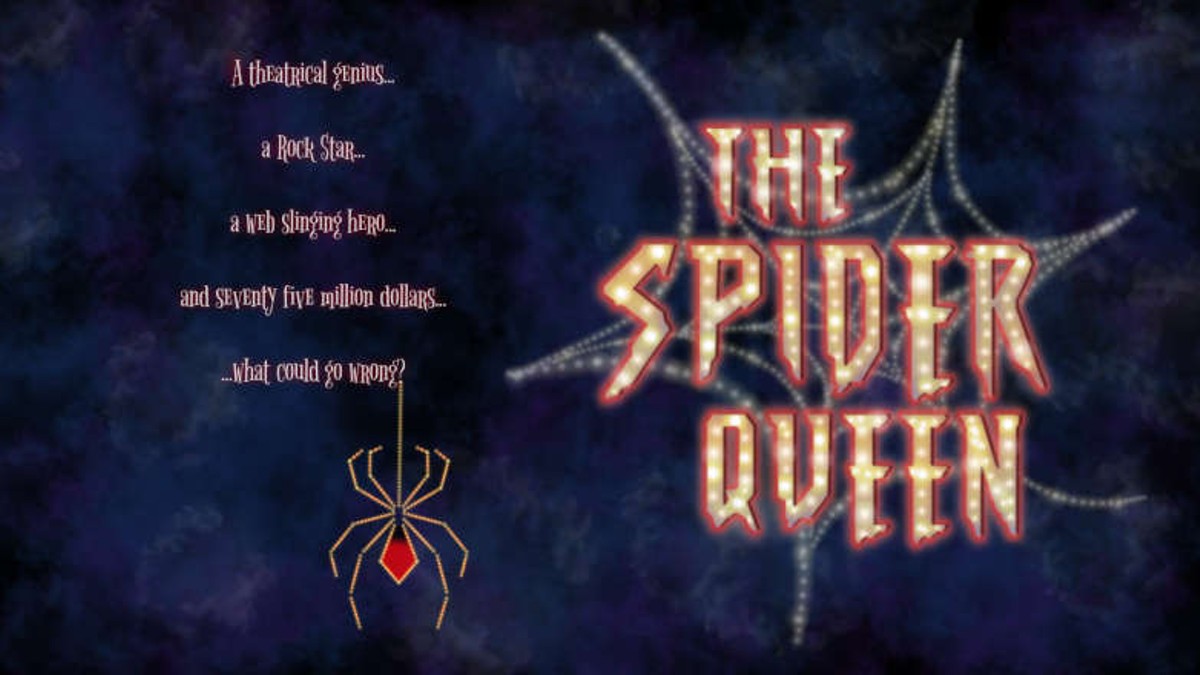 Orlando Fringe
Spider-Man: Turn Off the Dark may be the most notorious financial failure in Broadway history, but seeing it live (in its second, slightly less surreal incarnation) remains one of the most memorable experiences in my theater-going life. If you missed out on seeing that Marvel-ous misfire in person, you can experience a taste of the madness in this madcap mostly-true backstage tell-all.

Those wholly unfamiliar with this theatrical cautionary tale should brush up on the Wikipedia article beforehand for necessary context, because The Spider Queen starts in media res with playwright Glen Berger (writer-director Bryan Jager, who based his play on Berger’s memoir) apprehensively accepting the assignment to co-write the book for a mega-budget superhero show with acclaimed auteur Julie Taymor (Jillian Gizzi), and U2 musicians Bono and The Edge (TJ Washburn & Kyle Masteller, both hilariously unhinged). The ill-fated spectacle went through multiple producers (all played by Jarrett Poore) and incarnations before closing as a total loss.


Spider Queen attendees get to enjoy some of the unfairly maligned music during the preshow, and short stunt sequences simulated with flashlights and action figures are silly fun. But the focus is less on the actual merits of the musical or it’s polarizing director, and more on how schadenfreude-filled gossip columnists (Joel Swanson) undermined Taymor’s vision from the outset.

I loved the staged reading of an earlier version of Spider Queen at the last Winter Mini-Fest, and although this fully mounted version retains some of the reading’s deliberately theatrical devices (like narrated stage directions) it drops or diminishes numerous subplots and characters, including puppeteer Michael Curry and star Reeve Carney.

The result is a show with tighter pacing and energy, but which sacrifices depth and detail for manic momentum. I still enjoyed the dishy inside jokes and excellent performances — especially from the jittery Jager and intimidating Gizzi — but was left craving more meat to their key relationship. Even so, there’s a big web of fun for comics-loving Broadway fans to get tangled into here — including an obligatory Stan Lee cameo — alongside an intriguing implication that the debacle was a divine punishment for the creators’ hubris.

If only they had set their sights on Orlando instead of the Great White Way, they could have made the best theme park show ever, instead of the biggest Broadway bomb.