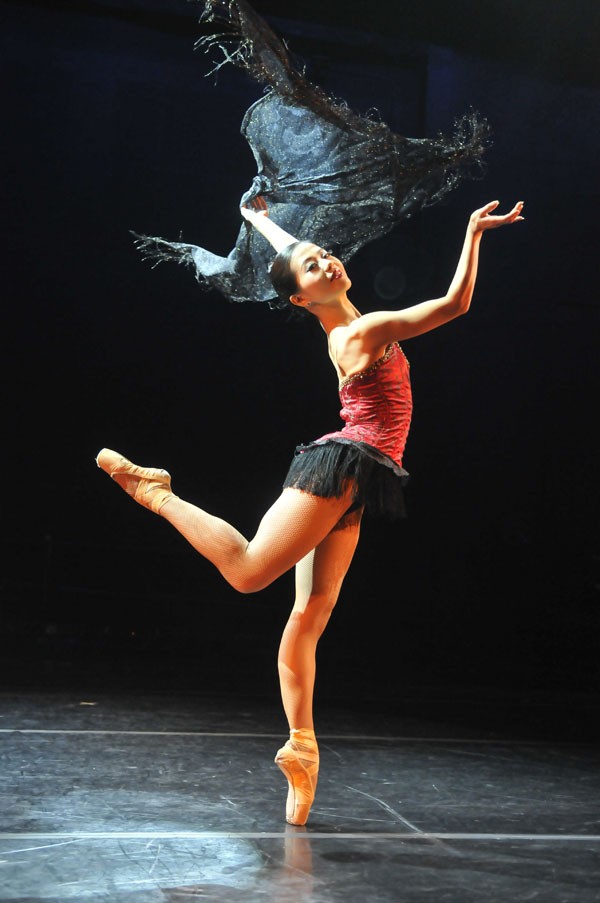 From the orchestra-right section of the theater at the Bob Carr Performing Arts Centre, every seat from the pit up to the balcony appears taken. It's a full house on the opening night of Orlando Ballet's Carmen, and the audience buzzes with an anticipation that's only slightly relieved when the lights are dimmed. Even as the curtain rises and the dancers on stage are in clear view, that anticipation doesn't subside. It's intrusive – pestering, even – tapping on the shoulders of the audience. The theater is silent.

The three dancers first revealed are Brandon Nguyen in the role of Don José, Patric Palkens as Escamillo and Chiaki Yasukawa in the center as Carmen. Nguyen, a consistently strong yet yielding presence amidst the background dancers who play the role of Spanish gypsies and villagers, dons a red jacket over his white shirt and tights. Yasukawa – at least a foot shorter than Palkens and Nguyen – bourrées back and forth between the two men who play her character's two lovers. Her feet glide across the black floor to the dramatic violins of the score by Georges Bizet and Rodion Shchedrin. Though the story has yet to unfold, it's almost readily apparent right from the start that Nguyen will lose Carmen to the alluring dominance of the untamed Palkens.

The gypsies mirror the central conflict of the story – a tale of a young gypsy girl murdered by a jealous lover – as they were originally intended to in Bizet's Carmen, a French opera written in the late-1800s, based on the novella by Prosper Mérimée. Orlando Ballet Artistic Director Robert Hill has manipulated the original story so that it resembles the ballet premiere of Carmen – the 1949 version choreographed by Roland Petit that starred Zizi Jeanmaire as Carmen and Petit himself as Don José.

In this production, Carmen – a powerful gypsy who steals soldier Don José from his fiancee and later becomes enraptured with another man, toreador Escamillo – remains as fiery and selfishly manipulative as in the original production. Yasukawa moves with precision: Her long legs snap into perfect leaps and her pirouettes melt into the arms of her male partners. Hill's choreography consistently brings Carmen into a domineering stance, with arms placed firmly on her narrow hips, right leg bent as she leans onto the toe of her pointe shoe, chin tilted up, bony shoulders aimed downward. Clearly, she's a powerful figure.

The gypsies and villagers in this show are a bit cloudier, though, both in terms of their neutral costumes and more languid dancing. Carmen, dressed in a striking red-and-black knee-length dress, reigns over the other dancers, who at times appear almost limp compared to her. The dancework of the gypsies in male-female pairs foreshadows the conflict between Carmen, Escamillo, Don José and Don José's fiancee (A reum Chung), but it's hard to discern whether the whimsical nature of their performance was intentionally choreographed or if the dancers' less-precise movements are simply accentuated by the near-perfect execution of the lead. Cannons are off by just a half-second; pirouettes land just a few feet too close to the wings.

Chung resembles Yasukawa, but her character and the execution of her moves is her polar opposite. Both dancers display impressive technical perfection and musicality, but where Yasukawa's movement explodes with fury, Chung's delicate, angelic performance begs the audience to sympathize with her as her lover leaves her for Carmen. Hill has cast them brilliantly, manipulating their moves so that they seem to wholly embody the sinful and saintly natures of their characters.

After Carmen lures Don José from his fiancee, he surrenders his red jacket to Carmen as a symbol of the sacrifice he's made for her – but just as he's given it all up for her, he watches through a window as Yasukawa and Palkens perform the most sexually driven pas de deux of the evening. The choreography is lascivious and the audience is propelled forward by the characters' lust for one another.

Carmen wears a fitted red corset and black fabric dangles just below her hips. Escamillo is shirtless; his long, lean stature and technical prowess resemble the infamous 1980 Escamillo danced by Mikhail Baryshnikov. A bed sits just off center stage, and as the two dance around it and on it, the ballet reaches its climax. With a lift in which Palkens raises Yasukawa over his head from a seated position and stands to flip her around his waist, they seal the deal. The audience exhales; the anticipation that set the stage at the beginning of the show is nearly gone, save for the final tragic scene in which Don José loses his mind and stabs and kills Carmen in a jealous, bitter rage.

After the usual series of bows and Hill's quick wave from the side of the stage, the audience filters out of the theater. A woman turns over her shoulder and whispers, “Wow, that wasn't boring at all.” If the audience had expected boring, Hill has proved them wrong. His choreography hasn't entirely remodeled the ballet, but his interpretation of the original delivered enough fire to deftly pull off his minor renovations.