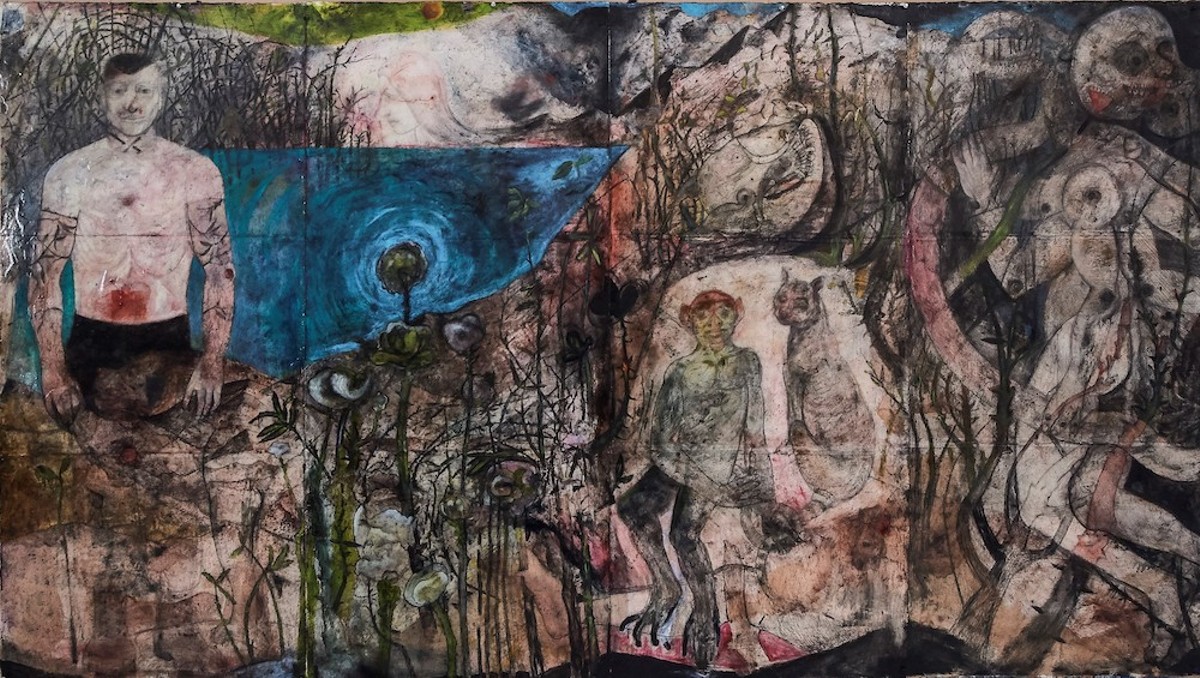 Robert Rivers is still in shock. A good befuddlement, but still. The longtime Maitland resident and UCF professor of art — grading for the semester finished mere minutes before Orlando Weekly rings him — just days ago took home the top honors in this year's Florida Prize in Contemporary Art exhibition-cum-competition at the Orlando Museum of Art.

It's worth mentioning also that this is the very first year that two local artists walked away with both the Florida Prize and the People's Choice award — which went to painter Matthew Cornell.

"I was very, very surprised," says Rivers of being named the winner at the opening reception for the Florida Prize exhibition. Thinking back to the gathering of friends, colleagues and even his brother (more on that in a moment), he can only call it an "enchanted evening."

And though Rivers has exhibited his work around the world — including shows in Washington, D.C., and Edinburgh, Scotland — this particular show feels quite a bit more personally special.

This is "The Promised Land," a series of 69 panels — each over 5 feet tall and 30 inches wide — that together create a breathtaking vision spanning 180 feet in length, annexing an entire large wall of OMA in two rows. The physically massive panels that make up "The Promised Land" (231 in all) have been occupying a good amount of creative and literal real estate in Rivers' life for about a decade now.

"The Promised Land" began as something very different than the giant hyperreality scroll that it is now. An early starting point was a landscape that Rivers was making for his brother as a tribute to Rivers' nephew — a Marine killed in Afghanistan in 2010 — but soon it became something very different: an ongoing series of illustrations that have preoccupied Rivers for years. What perhaps started out as a means of processing grief has kaleidoscoped outward into a new visual mythology.

"The day that I found out Thomas got killed I came home and did a drawing that started 'The Promised Land' drawings. It was a 22-by-30 inch drawing that sort of encapsulated the idea. The image for the soldier would be just a white T-shirt, army fatigues, boots and haircut. The first ones were very much about the soldiers, groupings of soldiers," says Rivers. "And then I wanted to do something for my brother. We recovered a picture of my nephew from his camera, and it was him with his gun inside a Humvee, and he had two big poppy flowers in his hand. He's holding his gun up with these big flowers. So I started thinking about doing a set of landscapes, sort of a haiku where I'd have the mountains, I would have the poppies, and then I would have an explosion. And it would just be a set of landscapes ... sometimes the poppies would be the dominant feature of the painting, sometimes the mountain would be the dominant feature, and sometimes the explosion would be the dominant feature."

On the day that Orlando Weekly and Rivers spoke on the telephone, he mentioned a new "Promised Land" panel that he is currently working on. "I've never felt the urge to finish. I'm just not that smart," says Rivers half-jokingly of his process. "Seriously, I have friends that are very intelligent, and they can think their way out of a painting before they finish it. I've never been that way."

Taking in the towering rows of panels that constitute "The Promised Land" is a breathtaking experience; just as impressive as the sheer size and scale is the obsessive layering of detail crammed into every inch of every panel of watercolor paper. The art is a mixed-media rush of frenzied creativity, with repeating motifs and images impatiently drawn and repainted right over one another. Walking back and forth, taking in the rows, the viewer notices new elements every single time. Cubism runs headlong into surrealism and creation myths, visions of the various hells and afterlifes across religions and time, and sobering anti-war allegories where sad-eyed soldiers, their wounds still fresh, journey through a nightmarish ... limbo? Valhalla? Purgatory? Ghoulish figures, devils, severed limbs, coiled and ravenous snakes and visceral bloodstains appear repeatedly, rendered with intricate, abstract, restless detail — you can sometimes see the "first take" flickering underneath the paint in faint pencil — the practices of sketchbooks, painting, draft and collage collide on the walls.

There are moments of respite and calm in the series — a woman holding her sleeping child — but this is a work preoccupied with humanity's inhumanity toward both itself and the natural world around it. Professor Robert Croker likened it to "a rumination on death in general, by violence in particular."

At times, "The Promised Land" can feel like an artistic Rorschach test, with no two viewers seeing the same thing. We saw hints of and companionship with the works of Hieronymus Bosch, Ralph Steadman, the Bayeux Tapestry, Fantastic Planet, Nick Blinko, da Vinci's sketchbooks and Brion Gysin's and William Burroughs' collaborative visual cut-ups. You'll likely see something completely different.

For his part, Rivers eagerly shares the influences that guided him to "The Promised Land." He speaks of the Renaissance-era painting "The Tempest" by Giorgione, as much for its themes — a young soldier struck down by the cruel randomness of war — as to what is, quite literally beneath the paint.

"They X-rayed underneath where the young soldier was," he explains, "and it was two women. That's sort of like how my work evolves. It starts off with one idea and then evolves into something else. So sometimes the idea actually comes from what happens in the picture, as it evolves, instead of me saying, 'Here's what this picture means.'"

Rivers also talks effusively about the influence of Mauricio Lasansky's anti-fascist The Nazi Drawings, Goya's "The Disasters of War" and Indian miniatures ("one of my biggest influences") first spotted on a trip to the Hayward Gallery in London years back. These same Indian miniatures moved him to employ a red pencil in his drawings, now one of his most trusted tools. 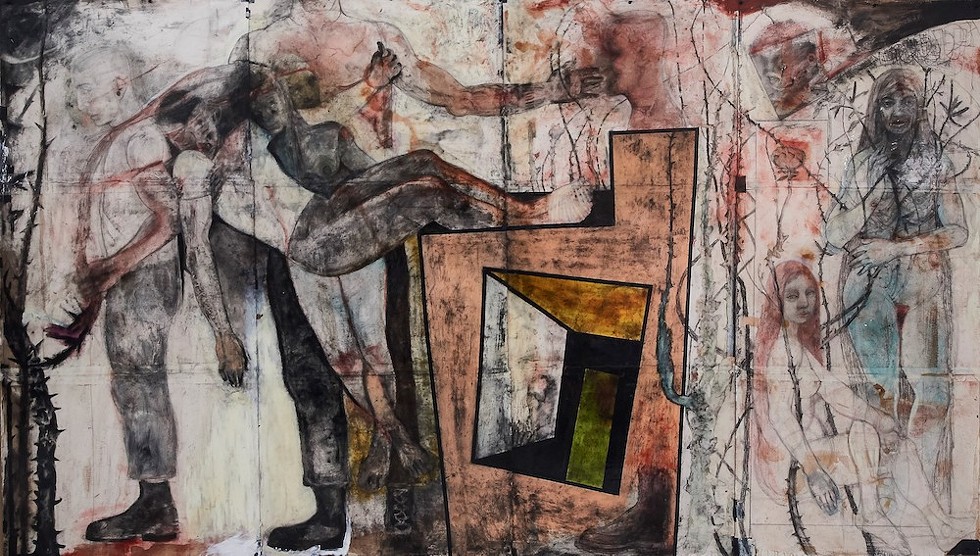 Rivers' drawings are executed swiftly and constantly, in solitude ("I'm in my Marlene Dietrich phase," he deadpans) — especially now with a modified easel designed by his stepson where three panels at a time can be mounted. This ever-growing body of work has been stuffed into every crack and crevice of Rivers' home. "I stack them and stack them in the guest bedrooms, I stack them underneath the pool table," says Rivers. "I've got these things everywhere."

Despite having invested so much time, sweat equity, endless red pencils and "gallons of gloss media" into "The Promised Land," Rivers was remarkably easygoing about the process of finally getting these drawings up on display for the first time, eager to relinquish control. Some of his students even pitched in to help with the installation.

"I was like, 'Oh these poor people, they're going to be overwhelmed by all this stuff.' But we had a great time. ... We're all walking around curating these panels, laying them out in order, and Hansen [Mulford, OMA chief curator] and Coralie [Claeysen-Gleyzon, associate curator] are saying, 'OK, let's try to build the row.' And then Hansen said, 'Let's make it a double row, so we can put twice as much in there!' I've never seen it all together, not laid out at one time like this. Coralie and Hansen did an outstanding job. They're just great people to work with. I told them, 'When do I get to throw my New York artist tantrum?' [laughs] I was trying to set a really good example to my students about being easy to work with, not getting upset, just having a good time with it."

Claeysen-Gleyzon described the soldiers in "The Promised Land" eloquently as "guides through the underworld," according to Rivers, but the artist himself has a slightly different journey or path for us to consider. 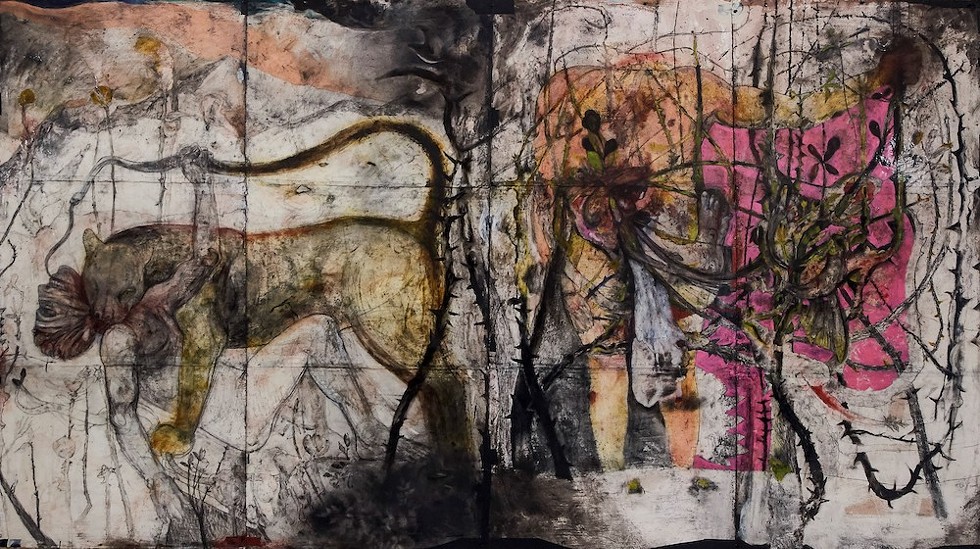 "I don't know if you've ever read Gravity's Rainbow?" he asks. "That was the good thing about having Hansen and Coralie choose this. It's out of order. The big drawing is out of sequence. ... We may do 10 panels in a row, and then it shifts very drastically to like 20 panels down the road. And I was very pleased [to see it]. It gave me a feeling of peace, because I've always been like, 'How am I ever going to show this thing? How am I going to get it all up on the wall?' All of a sudden, it reads very well, just like reading Gravity's Rainbow, where the book doesn't make much sense as far as telling the story, per se, but it's written so beautifully. You can pick the book up at any place, and just start to read, and it makes about as much sense reading that way as it does reading it from front to back. You're left with this sort of baffled dream."

May all our dreams — and nightmares — be this baffled.