Of course there's a backstory to Universal's Volcano Bay

Send a News Tip
Universal Orlando revealed on Wednesday that its yet-to-open water park, Volcano Bay, does in fact have a back story, and it's incredibly detailed.

Because everyone should know the origins to why they're splashing around in a lazy river, the  backstory actually has three major elements–The Creation Myth, The Waturi Legend and Your Arrival Story.

"The Creation Myth" comes from the story of Krakatau, the fiery god that once dominated the land, and his daughter, Tai Nui, who fell in love with Kala, a native boy. Krakatau's wrath over their love essentially created the elements of the island/waterpark. The angry waterpark god banished Kala forever to the sky where he became the moon, saddened by this, Tai Nui's tears became the water.

Yep. You're swimming in tears.

Here's where the volcano comes in- after realizing the pain he caused his daughter, Krakatau then pulled the earth into the sky to reunite the lovers, creating the centerpiece of the water park. Krakatau's anger and jealously was then captured in Vol, a fire spirit that is forever locked in the volcano.

Photo via Universal Orlando
And now for the "Waturi Legend," which is about the discovery of Volcano Bay by the Waturi people, who found the island through the help of a fish named Kunuku and the winds of fortune. When they finally found the shores of the bay, they knew they had found their home. 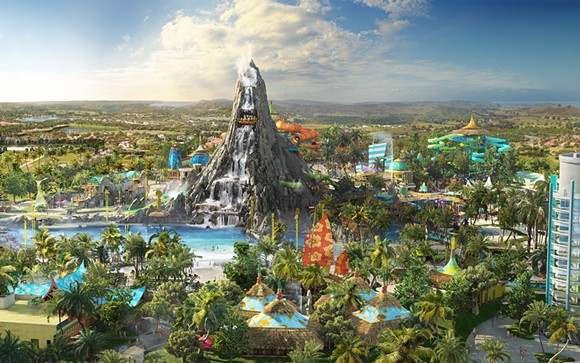 Photo via Universal Orlando
Finally, the present day "Your Arrival Story" is where the guests come in. Visitors who come to Volcano Bay will be welcomed by the Waturi people, who give them a TapuTapu Wearable (a wristband for the park), made elusively for Volcano Bay.

Guests of the park can even get the chance to meet Vol, the ancient fire spirit trapped in the volcano, if you can find him.

Photo via Universal Orlando
The story telling of Volcano Bay was done by Universal Creative, the same team responsible for the experiences within the park.

"Whenever we create a new ride or land, an incredible story is always our starting point," said Dale Mason from the Universal Creative, "And while creating an immersive, one-of-a-kind water theme park seemed like a challenge in itself, we knew amazing storytelling would be at the core of our creation."