New agreement allows out-of-state E-ZPass drivers to use our toll lanes, but it'll be awhile before we can use theirs 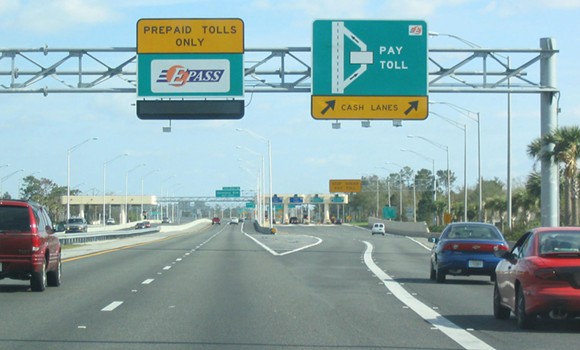 Photo via Wikipedia
Things just got a bit easier for travelers in Central Florida coming from sixteen northern states.

The Central Florida Expressway Authority (CFX) has announced a new interoperability agreement with E-ZPass. Launching in the spring, the new deal will mean drivers with E-ZPass transponders will be able to use them on all E-Pass locations, including the 408 and the Orlando International Airport.

CFX Chairman and Orlando Mayor Buddy Dyer said, "As the first agency to offer electronic toll collection in the State of Florida, it is only fitting that we are the first to accept E-ZPASS as payment on our system. We are thrilled that more visitors than ever will experience seamless travel on the beltway that connects our community."

But that seamless travel on the beltway won't actually happen.

The main issue with the new agreement between E-Pass and E-ZPass is how many of the local toll roads are operated. State Roads 417, 429, and 528 all are dual-governed with sections of the roads being managed by Florida’s Turnpike Enterprise. FTE uses the SunPass transponders instead of the E-Pass ones. CFX and FTE have a reciprocal agreement that allows both types of transponders to be accepted on all Florida toll roads, but only CFX has the new agreement with E-ZPass. This means visitors using E-ZPass will be able to use some of the express through toll booths on roads like 417 but not other booths. They also won’t be able to use any of the express pass toll booths on the Turnpike or other Florida roads where SunPass is the primary pass.

E-ZPass Group Executive Director P.J. Wilkins stated in the release announcing the agreement that “Expanding our network into Florida is wonderful news for E-ZPass customers who count themselves among the estimated 68 million annual visitors to the Orlando area.” He continued, “One of our main objectives is to improve the ease and uninterrupted travel that E-ZPass customers enjoy, and portability to the Sunshine State is certainly a common request.”

CFX already has a reciprocal agreement with toll agencies in Georgia and North Carolina.

FTE has not released any statements regarding any type of agreement between it and E-ZPass.