Image via Tishman
In early 2017, height balloons, used to verify sightlines, were spotted rising from the area where the Swan and Dolphin’s tennis courts are. The height balloons caused rampant speculation a new hotel or office tower in the area. Within weeks leaks, first from Orlando Theme Park News and then soon after from WDW News Today, sources stated it would be a new hotel.

As we wrote here in October the new hotel was “all but confirmed,” with even more details now leaking out, including concept art for the project.

Now we have official confirmation that the project is happening.

The owners of the Swan and Dolphin resort, which sits on Disney property but is owned and managed by a third party, have now confirmed the new hotel. Owners Tishman real estate firm and Metlife Investment Management issued a prepared statement earlier this week that gave details on the new hotel and provided our first official concept art for the project.

With 151 of the hotel’s 349 rooms being business suites with private meeting spaces, it is clear that this hotel is much more focused on the profitable convention and business crowd more than the typical vacationing family that most hotels around Walt Disney World are designed for.

Over 21,000 sq. ft. of meeting space will be spread across three floors at the hotel with some of the space on the top floor of the hotel, offering incredible views of WDW. Previously, WDW News Today reported that the hotel would have a 375-seat restaurant with a 40-seat bar on the top floor. Now Tishman has confirmed a restaurant with 75 seats and a lounge with 50-seats. It is still unclear if the confirmed restaurant will be on the 14th floor or will be located somewhere else within the hotel tower. It is possible the larger restaurant was downsized to accommodate the top floor meeting space. The top floor will offer some of the closest views of both Epcot and Hollywood Studios’ nightly fireworks, with an outdoor terrace visible in the official renderings.

An elevated pool deck will house a 90-foot-long pool and a fire pit. The pool deck will be located on the backside of the hotel overlooking World Drive providing impressive sunset views. A full-service state of the art health club is also planned for the hotel. 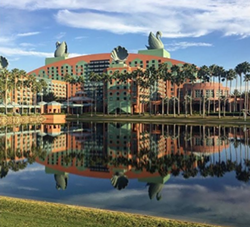 Image via SwanDolphin | Instagram
Despite being owned by the same groups who own the Swan and Dolphin, the new hotel tower has a distinct sleek, modern look. It will be quite the contrast sitting next to the Michael Graves-designed Swan and Dolphin towers with their more whimsical designs. Some have criticized the decision not to attempt to replicate the Graves design but with the celebrity architect now passed, it could be viewed as a way to honor his design by not muddying it with a replica.

One unknown still regarding the hotel is what or brand, the hotel will have. Early rumors stated that it would be part of The Kessler Collection, a small group of hotels found within Marriott’s Autograph Collection, but a spokesperson confirmed to the Orlando Weekly that they would not be associated with the new hotel. It may still be part of the Marriott Autograph Collection and is likely to be a Marriott branded hotel, just like the Swan and Dolphin. Tishman does manage multiple other hotels under numerous flags, including the Hilton Garden Inn Lake Buena Vista, two local Homewood Suites, the Sheraton Old San Juan, the InterContinental New York Times Square, the Westin New York at Times Square, and a soon to open Aloft along Chicago’s Magnificat Mile. They also developed and managed the Hilton Lake Buena Vista for years before selling that property some time ago. The three Orlando area hotels off Disney property Tishman owns were purchased by the group earlier this year in a deal worth $81 million.

Image via ICRAVE
Tishman has also committed millions in upgrades at the Swan and Dolphin, including $3 million in lobby updates coming soon to the Swan hotel just months after a $150 million update to the Dolphin. That update included extensive lobby updates and a refresh to all of the hotel's rooms.

The Swan's tennis courts, where the new hotel tower will be located, will close in the coming weeks with the construction of the third hotel tower beginning this fall.