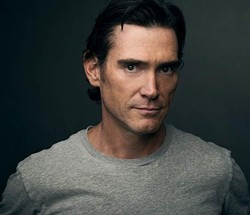 Billy Crudup
The 2017 Florida Film Festival, scheduled for April 21-30, will include 182 movies (the most ever) and appearances by actor Billy Crudup, writer-director-producer David Zucker and actor Robert Hays, it was announced today.

Crudup will screen a 35mm print of Jesus’ Son on April 28, and Zucker and Hays will screen Airplane! on April 29. They will participate in Q&A sessions following the films. And for the first time since 2014, a third celebrity event is planned, but that has not been announced yet.

The Oscar-accredited event will again be held at Maitland’s Enzian Theater and Regal Winter Park Village Stadium 20, and the biggest news at the 26th annual festival will likely be the reduced capacity of the latter venue. With the installation of reclining, sofa-like seats, Regal’s capacity has been reduced. The two houses that the Florida Film Festival previously rented used to hold 279 and 179 guests, but this year the festival will be using cinemas that seat just 163 and 135 (not including wheelchair spaces).

“More tickets will be on standby now that the theaters are smaller, and the amount of tickets offered for each film will be less,” says Marketing Director Valerie Cisneros. “So we highly recommend purchasing tickets in advance or buying a pass to guarantee admission.”

Indeed, pass holders will likely not be affected, but single-ticket buyers might be out of luck unless they make their selections online and in advance. And non-paying attendees such as volunteers and press could be shut out of many films. (At least festival-goers – unlike regular Regal moviegoers – won’t have to pick their seats in advance; the festival is general admission.)

Some said the festival should have rented extra screens to compensate for the decreased capacity, but that, of course, would have cost the festival considerably more money. In addition, many movies (particularly the “spotlight” films and others that already have distribution deals) are not contractually able to be shown more than once or twice.

The smaller Regal capacity means the festival will screen the opening-night film, The Hero, at Enzian, which seats 230. (That is a decision likely to be applauded because it allows the film and party to be held at the same location.) The Hero, directed by Brett Haley and starring Sam Elliott as an aging movie star reflecting upon his life, will probably be a crowd-pleasing, if slightly safe, choice. (It premiered at Sundance to mixed-to-positive reviews.)
click to enlarge

Crudup seems like a strong celebrity selection, given his extraordinary run over the last couple of years. Particularly memorable were his supporting roles in Spotlight and Jackie, my picks for the best films of 2015 and 2016, respectively.

Zucker and Hays are fun picks, but the former is admittedly an interesting choice considering he’s been making Republican propaganda films for the last several years. He did sit out the 2016 election, but President Trump’s proposal to eliminate funding for the National Endowment for the Arts – an organization the Enzian supports – might rub some patrons the wrong way. (“Surely you’re not interjecting politics into a festival-announcement article,” you might be saying. Yes I am. And don’t call me Shirley.) Still, few movie-goers will be thinking about politics while enjoying the best spoofy comedy this side of Young Frankenstein. 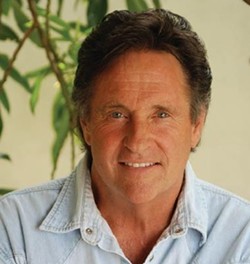 Robert Hays
Fifty-five of the 182 films are features, and 127 are shorts. Seventeen are world premieres while 122 others have another type of premiere status (national, Southeast or Florida). One film that is certainly not a premiere – but probably deserves its final showing – is the closing-night retro film, Russ Meyer’s Faster, Pussycat! Kill! Kill! But its almost charmingly bad B-movie quality is perhaps the reason it was picked. In a 180-degree turn, the other retro film is 1967’s Barefoot in the Park, written by Neil Simon and featuring endearing but slightly dated performances from Robert Redford and Jane Fonda. It will play Winter Park’s Central Park. (There will be no movies on the Enzian lawn, presumably out of respect to neighborhood residents, whose support the theater needs if its proposed expansion is to proceed.)

The festival is arguably the most diverse it has ever been, with films from 40 countries and 76 films directed by women – picked from a record number of submissions. And the themes are just as varied as ever, too, with movies focused on food, music, LGBT topics and women’s issues, along with three family films and several movies made in or about Florida. (The documentary Unrest is particularly noteworthy because its director and subject, Jennifer Brea, is from Winter Park.) It’s a lineup that Programming Director Matthew Curtis cites for its “bold and uncompromising filmmaking talent.”
Genres are again well balanced, with a healthy amount of narrative fiction, documentary and animation – along with an exceedingly unhealthy serving (four features and 16 shorts) of the love-them-or-hate-them “midnight movies.” (For best worst title, the winner is a three-minute Japanese film, Summer’s Puke Is Winter’s Delight.)

Usually generating the most buzz – but screening out of competition – are the “spotlight” films, which often enjoy big budgets and big names. Selections this year include Thomas Vinterberg’s The Commune, Julian Rosefeldt’s Manifesto (starring Cate Blanchett) and Eleanor Coppola’s Paris Can Wait. Tickets to these will go quickly, but if you miss them at the festival, never fear. They often return to the Enzian. Also highly anticipated are the documentary Strad Style, the Yiddish-language Menashe, the Thai feature Pop Aye and the music documentary Rumble: The Indians Who Rocked the World.

As in past years, the shorts programs are named for songs by musicians who recently died, including Prince, Leonard Cohen, Sharon Jones and George Michael. (Watch out for the “I Want Your Sex” shorts block.)

Passes and ticket packages range from $50 for five films to $1,500 for the ultimate “producer” pass, while a single movie costs $11 for an evening showing and $9 for a matinee. For a complete schedule of movies, filmmaker forums and parties, and to purchase tickets, visit floridafilmfestival.com.