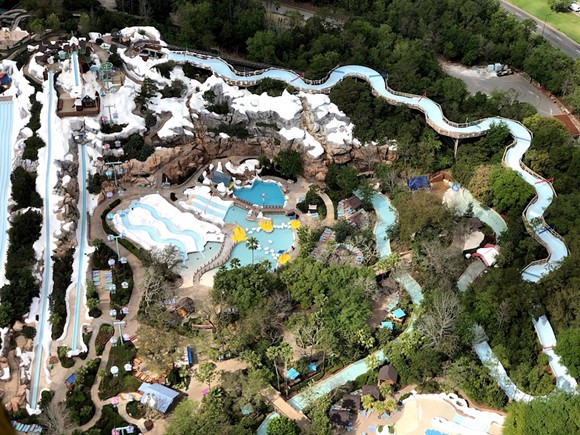 Photo by Seth Kubersky for Attractions Magazine
Disney's Blizzard Beach Water Park on Monday, March 17, after the park was closed

As the reality of the coronavirus pandemic finally sinks in for most Americans, it’s becoming more apparent that theme parks, hotels and restaurants won’t be opening in two short weeks. Instead, this will be an international fight for months to come.

The ripple effect of these closures and the corresponding slowdown of the U.S. economy are now exposing even more significant long-term concerns within the hospitality industry.

Unprecedented closures have already happened at Walt Disney World, Universal Orlando and SeaWorld, and parks around the world, but as these closures continue, layoffs and budget cuts are becoming increasingly likely. With President Donald Trump now recommending everyone cancel all discretionary travel, and with the CDC recommending no large crowds for at least the next two months, this pandemic will affect the tourism industry more so than many others.

Rumors have been flying with many expecting domestic travel bans, bankruptcies, and mass layoffs within the coming days or weeks. A few narratives keep rising to the top.

Hotels from D.C. to Vegas and Anaheim to Orlando are now seeing occupancy rates through the summer in the single digits. Some hotels have already moved to lay off much of their staff. Internal documents shared with Orlando Weekly show multiple hotels with fewer than four staff members left on the payrolls. One hotel manager reached out, requesting to remain anonymous out of fear of losing his job, but said his company is readying to lay off much of their staff.

Another manager of a convention hotel said in a private discussion:

“I’m very worried that we will get nothing. The small franchise properties, yes, they will close for sure. At this point, the hotel is going in the red because they have to pay overhead. They are not making anything, they’ve lost big money. To frank be with you, I’m completely fucked, as unemployment won’t be enough to cover bills. They need to pause bills and maybe suspend tolls, anything would help.”

"At this point, the hotel is going in the red ... they are not making anything. To frank be with you, I’m completely fucked."

He noted nearly everyone he knew in his apartment complex just off of Hwy. 192 worked in the hospitality industry, asking “How far can an apartment management company go without getting paid? I think we’re going to see a lot of evictions. I need a hug, but even that isn’t possible anymore.”

Others who spoke with Orlando Weekly also mentioned smaller franchise hotels. Hotels owned outright by the larger companies may be able to weather the coming storm, but those owned by management companies or smaller franchises might not. Since 2001, the lodging industry has been transformed by a shift in ownership, with many hotels today having the flag (or brand) and its linked to quality assurance being managed by one company, management at the hotel-level by a separate company, and the building’s owner as third company. In these cases, the ability of a unified message from a brand is more challenging to happen. Large debts are also worrisome for many tourism companies, including airlines and some theme park operators. One recent report stated that most airlines could be bankrupt by May. Within the hotel industry, mortgage debt has increased by more than 14 percent in the past two years, now clocking in at near $300 billion.

According to an insider who spoke to us, a Washington, D.C.-area lodging company is currently working to shore up a line of credit that it can offer franchisees who may be struggling. Details on the size, access, and strings attached to this loan program are still being worked out.

Last week, when the required closures were becoming a reality, many hospitality leaders, such as those within theme parks and hotels, thought this time could be used to speed up construction projects. But as it becomes clear that gatherings of any size are not encouraged, and as potential OSHA regulations related to coronavirus become more likely, the ability to find the labor for such projects becomes increasingly impossible. That means, at least for the foreseeable future, construction projects, including those already well underway, have come to a halt. Disney confirmed construction at WDW has been paused for the time being.

One person familiar with Disney’s construction plans compared this to the post-Sept. 11, 2001, plans where Disney abandoned projects already underway, such as the Legendary Years section of the Pop Century resort. That hotel construction site sat abandoned for nearly a decade before finally opening as the Art of Animation resort in 2012.

Disney has already used the closures as a way to review many longstanding third party contracts with many of Epcot’s World Showcase performers being let go over the weekend, some of whom have performed at the park for decades.

With the news cycle being consumed by the pandemic, it looks like Disney and others have decided this might be a good time to move forward with decisions that may generate pushback in more normal times. The domino effect first started by coronavirus is now moving forward with layoffs, budget cuts, and other choices that typically garner a large amount of negative press happening with little to no attention.

Nearly everyone who spoke with Orlando Weekly expected closures to last well past the proposed April 1 reopening, most saying it’ll likely be May at soonest. Many pointed to early June for the potential opening timeline, with a few even saying that it could last until fall.

Speaking specifically about Disney World, reopening the parks will take some time, thanks to Disney ending this semester’s College Program and laying off those third-party entertainers. According to Lance Hart of Screamscape, the resort will likely do a phased opening with the Magic Kingdom and Hollywood Studios opening first, followed soon after by the Animal Kingdom. Epcot, which is the most reliant upon international labor and which currently has the most construction projects, may be delayed longer. For the foreseeable future, foreign workers coming to Orlando will likely have to quarantine for at least two weeks. A delayed opening of this park would also allow for many of the current construction projects to move forward without the hardships they face when the park is fully operational.

Questions still remain on what crowds will be like after the pandemic recedes, and if at that will the nation be facing a recession. One analyst we spoke to believed the tourism industry will take two to three years to recover from this downturn, and that prediction came before the U.S. theme park closures were announced. One hopeful note amongst all the bad news is so far hotel reservations for Q4 have remained steady with tourism industry publication and research company Skift, noting that Orlando and Vegas may be even busier than normal.

For Orlando, all of this comes as a reminder (the third such in the past 19 years) that, at least as it is currently, the hospitality industry is one where few workers have any long-term job security, benefits, or ability to easily save. This makes any economic slowdown difficult for the industry.

Even while other sectors like tech and medical have expanded in the region, Orlando’s reliance upon tourism will once again be tested in the weeks and months ahead.

_
Due to rapidly changing circumstances surrounding the coronavirus (COVID-19) pandemic, many Central Florida events have been postponed or canceled. Orlando's restaurants, venues and hospitality workers could use your support right now. Order takeout, buy gift cards and tip generously – but also call ahead to venues to make sure an event is still happening. As always, follow CDC guidelines on staying safe.