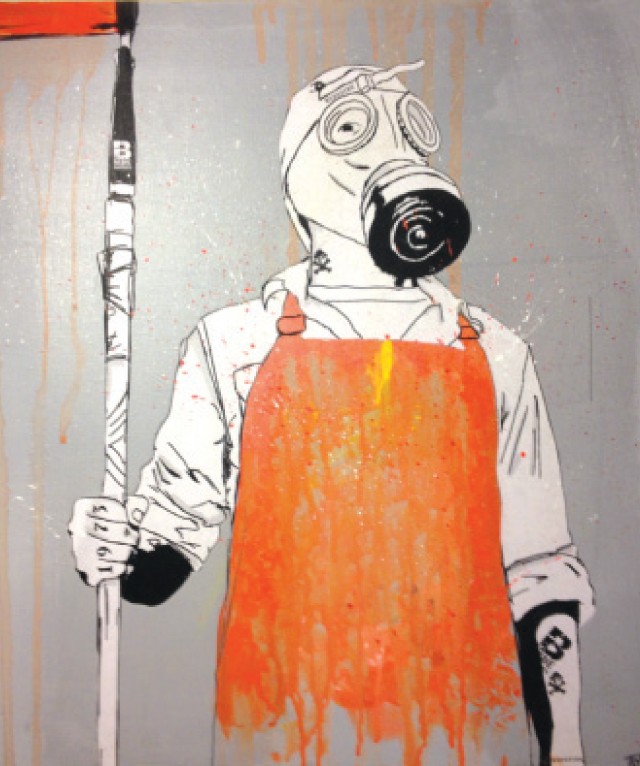 Germinating underground like a seed dropped on a city street, the B-Side Artists grew out of cracks in the urban sidewalk. While other artists complained and left Orlando for more clever cities, this informal collection of street artists rooted and thrived, weathering storms, and this year they're bearing fruit. Back from last December's Art Basel Miami, the crew has matured and new branches are sprouting.

The B-Side collective is loosely led by artist and musician Asaan "Swamburger" Brooks, although fuzzy, in-flux collaboration, not hierarchical rule, is the key to this group's spirit. His eyes flash and a ready smile lights his round face (partly obscured by long dreadlocks) as he talks about B-Side and "the constructive power of art to liberate, as opposed to so many destructive forces at play in the street today."

Swamburger, who studied traditional visual arts at Columbia College in Chicago, says, "Artists abhor a sellout." (Think Thomas Kinkade.) "So we spoof this term, because like most artists, we want to see the show sell out!"

Their name, B-Side, is also a spoof. Old 45-rpm vinyl singles carried a band's pop radio hit on the A-side, but the B-side, basically blank space to be filled, generally bore an unknown, often much more interesting song.

The group's soul is its looseness, with only one law: Make art, get better and show the work as much as you can.

"There are more places to show and sell; we are setting up on street corners and public lots," says Christopher "Tobar" Rodriguez, a slender Chicago native and one of the group's main men. Of course, they've also been showing quite a bit at CityArts Factory, the city-sponsored gallery conglomerate that's about as far as throwing up a piece in an alley as you can get. Co-evolving with downtown's tentative moves toward a developer-friendly "bohemian" vibe, B-Side was in the right place at the right time.

Tobar jumped the curb – moving from the street to the gallery – here in Orlando, just like Swam and most of the other B-Siders did. Resonating with each other over informal meetings and gallery hops, many have day jobs and pursue their own art careers independent of the collective. "We stick together," said Tobar recently, "because we see each other's work, it makes us reach higher and think more. After this show, I'll probably push harder."

A turning point for many of the B-Side artists was the Thanksgiving 2009 shooting of Palin Perez Jackson. After the loss of one of their own members, the urgency of their work deepened and many still talk about the incident with poignancy and regret. Jackson's death was a rallying point, renewing B-Side's commitment to their art and their crew. Most turn somber at the mention of Jackson's memory, which serves as another uniting bond.

Despite growth and success and a new, wider audience, the work remains edgy and urban. Tall, handsome Mark "Tr3" Harris creates highly textured skateboards rich with Native American symbolism. Delicate earthtone shapes, white symbolic writing and mythical images from Tr3's inner lexicon interweave on a black base, making these decks into totems. Halsi Helfrich, a recent recruit and video artist, began as a student in middle school and at only 15 has earned his chops enough to exhibit along with the veterans.

Swamburger's latest commission is a luminous, sinewy male figure in the center of a large canvas, busting apart his chains, crying for freedom, his huge workers' hands clenched against the white-collar towers of the city behind him. The street-art feel is highly refined and taken to a sophisticated level, its rawness disguised within subtle, transparent blues and reds, yet it comes through in the black edges and outlines of the buildings.

This man "is fighting for his voice to be heard," Swam says. It's pretty hard not to interpret the image as symbolic of something in his life or that of his friends, but the B-Side Artists are most definitely coming through loud and clear.