After closing for more than a year, SeaWorld Orlando prepares to reopen their exclusive Pass Member Lounge 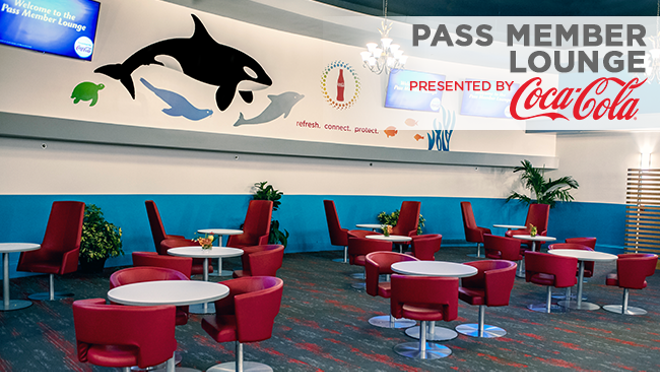 Image via SeaWorld
A large part of SeaWorld Parks recovery plan has been to attract locals–those within a few hours’ of the parks. With that effort in mind, SeaWorld unveiled a new pass member only lounge at SeaWorld Orlando in 2015, just months after Joel Manby was brought in as CEO.

Manby was the one who announced the effort to attract more locals, and since his departure earlier this year the company has seen continued success on that front– the most recent quarterly report including a double-digit increase in season pass sales revenue.

When the Orlando passholder lounge debuted in 2015, it had free soda fountains, thanks to a presenting sponsorship with Coca-Cola, that also included SeaWorld exclusive sodas. Other amenities included free phone charging lockers, a small made-to-order menu of hot foods, a concierge desk, and free Wi-Fi.

The lounge proved extremely popular, with it oftentimes nearly reaching capacity on hot summer afternoons. Filling a formerly unused corner of the Hospitality House, known at the time as the Terrace Grill, the Pass Member Lounge Presented By Coca-Cola was used a place for locals to meet, hide from the afternoon storms, or to just cool off.

Then in 2017, the lounge closed as construction ramped up on Infinity Falls. The new family raft ride wraps around the entire front of the building where the lounge was located, blocking all access to the building.

At that time SeaWorld Orlando President Jim Dean confirmed that a new lounge would be returning. "After much deliberation, we have made the tough decision to close our Pass Member Lounge during the construction of Infinity Falls. We know the lounge is a favorite Pass Member benefit and we apologize for this temporary closure. Rest assured it will open better than ever next year."

Now SeaWorld has released details on the new SeaWorld Orlando passholder lounge. Located in the same building, now known as the Waterway Grill, the new passholder lounge offer many of the amenities found in the former one. Coca-Cola has moved from just being the presenting sponsor to now being the title sponsor for the new Coca-Cola Pass Member Lounge.

Gone are the roaming servers, who passholders had to flag down to order from the menu of quick bites. Now a self-order kiosk, similar to those found within the Waterway Grill itself, allow passholders to order hot items on their own.

The concierge desk, Wi-Fi, and free soda have all returned. The furniture, which formerly looked like a mix of random items that were found backstage have been replaced with Coca-Cola red chairs and small tables. With annual pass sales seeing a significant increase since the lounge’s closure hopefully the new lounge will be larger than the former one, allowing for more room to hold all those new passholders.

Image via SeaWorld
Bottle art similar to that found in the soon to open SeaWorld Pass Member Lounge
Coca-Cola is featured prominently in the new lounge with Coke artwork filling the ways, including some designed members themselves. Passholders are encouraged to submit original Coca-Cola bottle designs. 25 of the designs will be selected and displayed on 22-inch tall Coca-Cola bottles that will decorate the new lounge.

An opening for the new lounge has yet to be posted, but the Coca-Cola bottle design contest ends on August 21. Infinity Falls has been testing recently and should open within the next few weeks. The lounge and Waterway Grill will likely open around the same time.

Other pass member lounges have been tested, including a short-lived one at Aquatica Orlando. SeaWorld hasn’t confirmed if any of those lounges will also reopen.