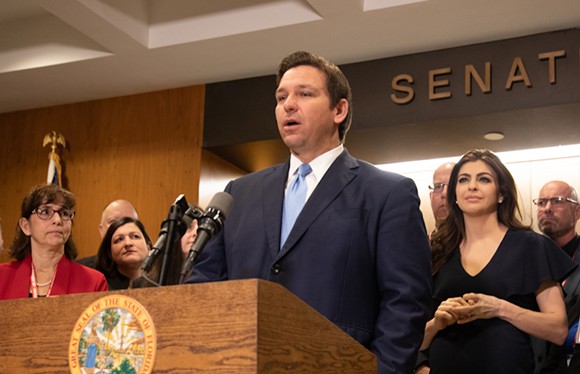 House and Senate leaders announced Saturday they have agreed to Gov. Ron DeSantis’s request for $25 million to help the state combat the spread of the novel coronavirus, known as COVID-19.

And one top Republican expressed concern that the highly contagious virus, which has caused the deaths of two Floridians and has people reconsidering travel and leisure plans, could adversely impact the state’s tourism-dependent economy. COVID-19 is continuing to spread as legislators begin to hammer out details on the state’s roughly $92 billion budget.

“The concern is great and it’s mostly because of possible panic,” House Speaker Jose Oliva, R-Miami Lakes, said of the coronavirus. “Panic is what causes runs on banks and economic downturns. It causes people to leave the stock market all of a sudden. And it causes people to stop doing things in such a rapid fashion that those industries cannot possibly compensate.”

Meanwhile, both Oliva and House Appropriations Chairman Travis Cummings, R-Fleming Island, said the Legislature has agreed to the governor’s request for $25 million to help fight the further spread of the virus in Florida.

“We feel confident that the House and Senate and our leadership can meet that and equip them to properly care for Floridians and protect them as well,” Cummings told reporters.

Oliva said he had spoken by phone with DeSantis Saturday morning and that he had promised the governor the funding would be made available.

Meredith Beatrice, a spokeswoman for DeSantis, said the coronavirus response “is an evolving situation and funds will be used to address the most pressing needs.”

The money could be used for “laboratory supplies and personal protective equipment; additional statewide staff to expand capacity to investigate and monitor individuals with COVID-19 and those at risk for contracting the virus; and enhanced communication to the general public, healthcare providers and visitors to our state,” Beatrice said in an email.

COVID-19 was first reported in Wuhan, China, on Dec. 31, and has spread to dozens of countries, with cases popping up in various U.S. states. The virus can be particularly dangerous for seniors and people with other medical conditions. There is no vaccine to prevent the virus.

DeSantis said earlier this week that the federal government will be sending “tens of thousands” of coronavirus testing kits to the state. The final destinations will be hospitals and doctors’ offices, as Florida tries to meet an edict from the federal Centers for Disease Control and Prevention to allow anyone to be tested if a doctor suspects they have the virus.

According to the Department of Health, the state had 14 confirmed cases of the virus as of Saturday afternoon. Two of the 14 people who have tested positive for the virus died, DeSantis announced late Friday night. One person was a 72-year-old Santa Rosa County man. The other was a Lee County resident. The health department did not immediately release the Lee County resident’s gender or age, saying the person was “in their seventies.” Both died following international trips. State officials did not disclose where the two people had been.

There have been 100 negative COVID 19 test results and another 88 tests are pending results, according to the website. The state currently is monitoring another 278 people for the virus, the website states. In all, more than 1,000 people have been monitored by the state.

DeSantis on Saturday also ordered the Florida Division of Emergency Management to activate the state emergency operations center to Level II, to respond to the virus.

“In many ways, Florida is the heart of the cruise line industry. We recognize that. It’s a destination not just for Americans, but for people around the world,” Pence, the Trump administration's COVID-19 czar, said Saturday.

Pence announced at the meeting that there is a plan to remove people from the Grand Princess cruise ship where 21 passengers have tested positive for the virus. The cruise ship is currently stationed off the coast of California.