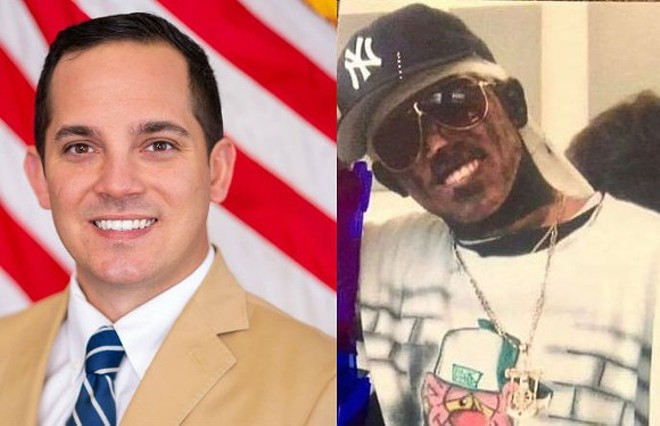 State Rep. Anthony Sabatini, the Florida Republican who unsuccessfully tried to relocate removed Confederate statues to his hometown and who refused to resign after wearing blackface, tweeted “MAGA” at a reporter who was assaulted at the Trump re-election campaign rally in Orlando Tuesday evening.

Orlando Sentinel reporter Michael Williams tweeted a video showing a Trump supporter attempting to slap his phone and threatening to kick him in the testicles. “A Trump supporter tried knocking my phone out of my hand as I was recording him being kicked out of the Amway Center,” tweeted Williams.

The man was later arrested and charged with battery, reports the Sentinel.

Williams then asked Sabatini to explain his “MAGA” tweet, to which the lawmaker replied, “The most appropriate reaction to the deliberately biased and distorted coverage of the rally by the anti-Trump Orlando Sentinel yesterday is to not comment on its spin and sensation, but to ignore the content and reply with the peaceful phrase they hate – MAGA.”

Williams then pointed out that Sabatini wasn’t actually reacting to the paper’s coverage of the Trump rally, but rather a video of a reporter getting assaulted. “Is this conduct you condone?” asked Williams.

Sabatini then reposted his first initial comment and accused Williams of being “illiterate and a modern journalist.”

“You’re searching for incidents that were very rare at the event in order to cast a dark, negative light on the event,” said Sabatini in a later interview with the paper.

I would appreciate an explanation from Florida Rep. @AnthonySabatini about this reaction to a video of me getting assaulted while doing my job. pic.twitter.com/YSliKrOUpJ


This isn’t the first time Sabatini’s social media activity has gotten him in trouble. According to the Daily Commercial, the freshman representative also "liked" a Facebook post last year showing two apes and Charlton Heston in a clip from the movie Planet of the Apes, with the added caption: 'Valerie Jarrett flanked by some NRA guy and a Muslim Brotherhood grand poobah....'"

His hometown paper also penned an editorial scolding Sabatini to “grow up,” saying that he’s “at the least, grotesquely racially insensitive, and perhaps worse.”