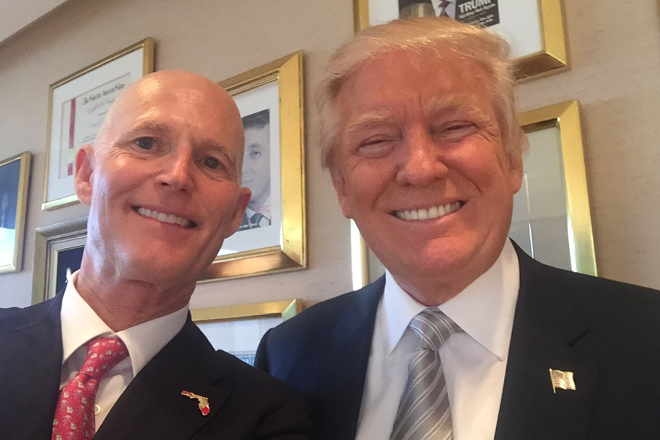 On Monday, without citing evidence, President Donald Trump called for an end to the election recounts currently underway in Florida and, in the process, alleged that ballots are missing or have been forged.


The Florida Election should be called in favor of Rick Scott and Ron DeSantis in that large numbers of new ballots showed up out of nowhere, and many ballots are missing or forged. An honest vote count is no longer possible-ballots massively infected. Must go with Election Night!


By the president's logic, that means ballots mailed in from overseas and by  military voters that arrive by Friday wouldn't be included in the tally.

It's a win-at-all-costs perspective shared by Rick Scott, who, yesterday, went on Fox News Sunday to accuse Sen. Bill Nelson of trying to "commit fraud to try to win this election." During the appearance, Scott also said his campaign had filed lawsuits against Brenda Snipes and Susan Bucher, the county election supervisors in Broward and Palm Beach. He then pointed to an incident being reported by conservative media outlets, in which a lawyer claiming to represent Nelson objected in a public hearing to tossing out a provisional ballot from a non-citizen. The Nelson campaign has denied that the lawyer was authorized to make such an objection.

But Scott's narrative-twisting campaign didn't end there. Earlier today, as an encore to his series of weekend cable news performances, Scott called Nelson a "sore loser" and alleged that Nelson's "just here to steal this election" during another Fox News appearance.

Firing back via Twitter, Nelson called on Scott to pony up by recusing himself from the recount process.

"Scott cannot oversee this process in a fair and impartial way. ... Given his efforts to undermine the votes of Floridians, this is the only way we can ensure the people's votes are protected," Nelson said.

Bill Nelson calls on Rick Scott to recuse himself from the recount process.

"Scott cannot oversee this process in a fair and impartial way ... Given his efforts to undermine the votes of Floridians, this is the only way we can ensure the people's votes are protected." pic.twitter.com/Me8EgHmMm5


So how'd we get to a point where one side is claiming "fraud" and the other is calling for a fair democratic process?

Easy – this is how modern elections, with all their apparent flaws, work. Due to absentee and provisional ballots coming in the day of, not every vote can be counted on Election Day. This process can take a few days because results aren't considered official until everything has been checked and double-checked, and usually the additional votes aren't enough to affect the outcome of the election (hence the reason why we see election results being confirmed a few weeks afterward.) Once everything's checked, if the results are too close to call, thus begins a mandated recount.

And that brings us to the Sunshine State's current predicament.

Under state law, a machine recount is automatically triggered when the margin is 0.5 percent of less, while a manual recount is trigged when the margin is 0.25 percent of less. Currently, machine recounts have been ordered statewide for both the U.S. Senate race between term-limited Republican Gov. Rick Scott and Democratic incumbent Sen. Bill Nelson and the gubernatorial race between Republican U.S. Rep. Ron DeSantis and Democratic Tallahassee Mayor Andrew Gillum. A recount was also ordered for state Agriculture Commissioner candidates Democrat Nikki Fried, a medical cannabis lobbyist, and Republican state Rep. Matt Caldwell.

As of today, Scott leads Nelson by .15 percent, or 12,562 votes, according to results from the Florida Division of Elections, while DeSantis leads Gillum by .41 percent, or 33,684 votes. Fried, meanwhile, pulled ahead of Caldwell by .06 percent, or 5,326 votes, over the weekend.

After Florida Secretary of State Ken Detzner, a Scott appointee, formally ordered recounts in the statewide races on Saturday, election administrators have until the deadline on Thursday to present their findings.