UPDATE: The yet-to-be-named ship that Carnival will be homeporting at Port Canaveral will be their largest ship ever, but will not be the largest cruise ship ever. Royal Caribbean still holds that title.

With the new 180,000-ton Carnival ship holding a whopping 6,500 passengers, the Port will need to house a new terminal to ensure a smooth boarding and deboarding experience for all those guests. According to Port Canaveral, the replacement Terminal 3 will be the largest single project in its history. Altogether the $150 million development will include a 1,800-space parking structure, a two-story 185,000-square feet terminal, wharf updates to hold the new ship, and various access improvements.

The new ship will run on the more environmentally sensitive liquefied natural gas (LNG), a first for any cruise ship in North America. Port Canaveral has committed to building liquified natural gas infrastructure that will help cruise ships refuel while at the Port. An LNG distribution plant is planned nearby and multiple space companies in the region plan to use LNG in their rockets. With the Port now committed to providing access to LNG, it could see even more large ships call the port home in the since so few ports currently offer the fuel alternative. Disney Cruise Line’s new ships will also be using liquefied natural gas with at least two of their new LNG powered ships being based out of Port Canaveral.

Carnival, the Port’s oldest cruise partnership, has committed to remaining at the Port for at least 25 years with twenty years of renewals after the initial agreement expires. The deal increases the annual passenger fee that the Port receives from Carnival from the current rate of a fixed $7 million per year to a sliding $14.5 million, with the increase being stepped up over multiple years.

“This agreement is a valuable milestone for the Port’s cruise business and a foremost achievement for the entire region’s economy. Our partnership with Carnival has continued to grow over the years thanks to this community’s assets, our commitment to service, and a steadfast focus on preserving our financial strength to invest in the Port’s future,” said Tom Weinberg, Secretary/Treasurer, Canaveral Port Authority Board of Commissioners. 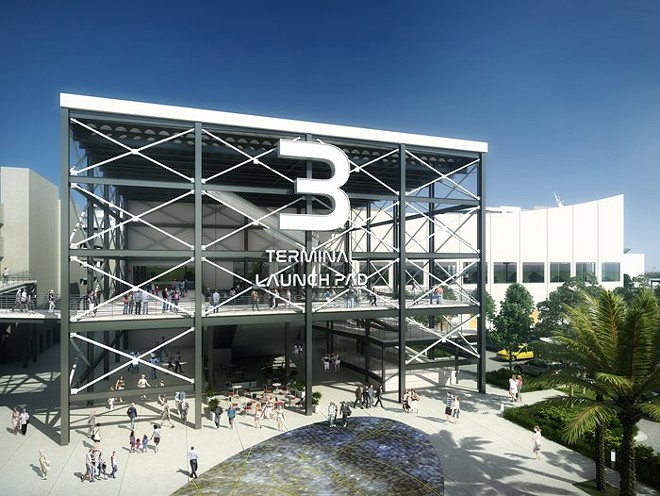 Drawing inspiration from the nearby Kennedy Space Center, Terminal 3 has nods to the nearby space industry with signage referring to the terminal as a “launch pad” and renderings showing a rocket launch in the distance. A scale model of a rocket can be seen hanging above the large two-story glass-clad entrance of the terminal.

The new terminal is planned to be finished in mid-2020, just ahead of the Carnival’s new ship. Currently, Carnival has 650,000 passengers pass through Port Canaveral for trips on one of the line’s three year-round vessels found at the Port. Port Canaveral sees an average of more than 4 million passengers with expected growth to more than double over the next three decades. Two new terminals and multiple updates to other existing terminals are also in the works for the Port, but no details on those terminals have been shared. Other plans in the works at the Port include a new aquarium via a partnership with the Brevard Zoo, a large central park, and an expanded commercial district. All of those plans should be realized within the next five to ten years.