Orlando's Haitian community calls on Trump to keep his promise

As they stood in front of Universal Studios in Orlando this week, the local Haitian community chanted one message for President Donald Trump: "Keep your promise."

Haitian refugees say they want the Trump administration to continue expanding immigration protections into the long term. Earlier this week, Department of Homeland Security Secretary John Kelly decided to extend for six more months the temporary protected status given to more than 58,000 Haitians. The program protects Haitians from deportation after the devastating 2010 earthquake in the Caribbean country, which killed hundreds of thousands of people and left more than a million people homeless. But in his statements, Kelly also signaled the end of the program, saying the six-month extension allows Haitian TPS recipients to obtain travel documents and make arrangements for their ultimate departure.

In Orlando, about 100 Haitian faith leaders and hospitality union workers who make up the backbone of the region’s tourism industry protested the decision, saying the measure from the Trump administration leaves them living in uncertainty and fear of deportation. Florida’s Haitian community, which is the largest in the nation, still remembers when candidate Trump stopped in Miami’s Little Haiti neighborhood last year and said he wanted to be their "greatest champion."

Franz Jean, a local hotel worker, says through a translator that he wants Trump to extend the TPS program for at least 18 months or longer. Jean left his country as a refugee six years ago after the earthquake left a mess in Haiti and squashed job opportunities. He works to send money for his family who is struggling to survive, like many other families on the island who haven't recovered from the earthquake or Hurricane Matthew. The Miami Herald reports remittances from abroad like Jean's account for 20 percent of the annual income of Haitians living on the island.

"When Donald Trump was running for office, he went to Little Haiti and a lot of Haitians helped him with his campaign," Jean says through a translator. "Trump has to keep his promise because a lot of Haitians supported him. For John Kelly to turn around and to extend the TPS for only six months, that's a slap in the face." 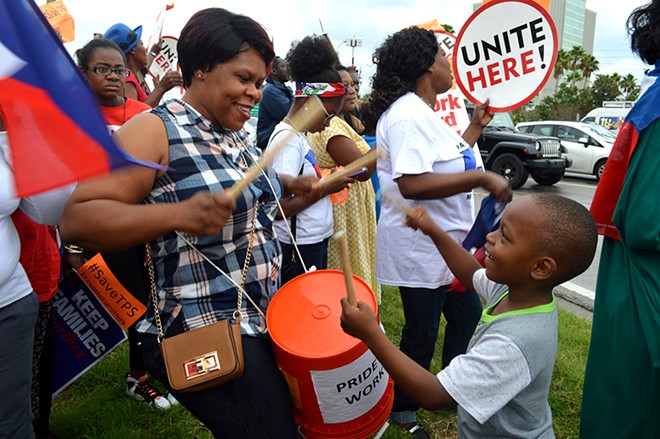 Crescia Meraus, who is also a local hospitality worker, says Haitians have not recovered from the tragedies that have devastated the country. She sends her family money, food, clothes, shoes and anything that could help them because they haven't been able to rebuild their home. They live outside.

"I help my country, and I help America too," she says. "I pay taxes. I pay everything. I want to help my family. I don't want to go."

Advocates say six months is also not enough time for the Haitian government to assimilate and employ tens of thousands more people into a country that is already struggling. U.S. Rep. Frederica Wilson, a Miami Democrat, told the News Service of Florida that the decision by the Trump administration was a "partial victory."

"While this news will give the tens of thousands of Haitians anxiously waiting to learn the program's fate some measure of relief, this is in fact a cup half full situation," Wilson said, according to NSF. "The reality is that in six months Haiti will still be in no position to absorb and aid 58,000 unemployed people."

Meraus says she wants the president to know she and other Haitians are working hard in America to support themselves and help their families.