Donald Trump has a Florida problem.

On the surface, everything about The Sunshine State makes sense for Trump. His good buddy Gov. Rick Scott is a strong political ally, Florida's elderly seem to love Trump's support of Social Security, and he evens owns a "second home" in the Mar-a-Lago resort in Palm Beach.

However, none of that seems to matter.

A new study by Nate Silver's Fivethirtyeight.com suggests that the historically red Sunshine State might be a tough hurdle for The Donald this November.

The site took 21 poll samples in Florida and then weighted each poll by its sample size, when it was conducted, and how accurate the methodology was of each poll.

The results show Hillary Clinton with a 70.6% chance of winning Florida, Donald Trump with a 29.4% chance, and Libertarian candidate Gary Johnson at a brutal .01%. 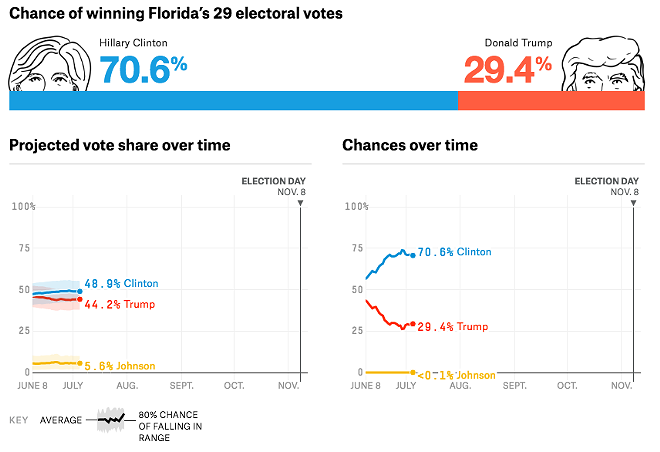 On a national level Trump's chances look even worse. FiveThirtyEight gives the billionaire a 20.7 percent chance of winning the White House.

So, why is Trump struggling in a state that traditionally goes Republican every election year?

As the New York Times points out, a lot of Trump's massive Florida slump stems from major shifts in the state's demographics.

The demographic changes in Florida over the last decade rival or even exceed those in states like Nevada or Virginia, but the Democrats haven’t gained nearly as much as they have in those states. When Al Gore and George W. Bush fought to an effective tie in the state 16 years ago, 78 percent of registered voters were non-Hispanic whites. When Barack Obama edged Mitt Romney in 2012 by less than a point, just 66.5 percent of registered voters were.

To overstate how bad this situation is for Trump, the Times argues that "Clinton could lose all the other swing states where she’s airing ads — Ohio, Nevada, Colorado, Virginia, North Carolina, Iowa and New Hampshire — and still win the presidency if she won Florida."

As history has shown, it’s almost impossible for a Republican candidate to win the presidency without Florida’s 29 electoral votes, and with Trump consistently alienating hispanic voters, his Florida problem will probably cost him much more than the Sunshine State.

« Wrong and Nothing show pacesetting…  |  Gideon's Bakehouse is moving into E… »