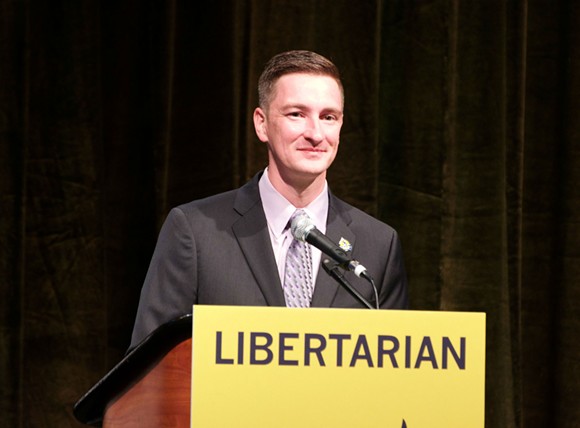 The Libertarian Party descended into Orlando’s tourism district Friday with a pretty optimistic tune as delegates set out to pick a presidential candidate to run against the Democratic and Republican nominees in November.

What’s the joy in running a third-party candidate in a two-party system? Well, there’s not much, but the mud-slinging and downright nastiness of the 2016 election has made some people look for an alternative.

The party of small government and increased freedom says their dues-paying membership grew by 30 percent from January to May of this year, with 411,250 members registered as of February, according to a news release. National polls from Monmouth University Polling Institute and Fox News showed the leading Libertarian candidate, former Republican governor of New Mexico Gary Johnson, polling at 11 percent and 10 percent respectively against former Secretary of State Hillary Clinton and billionaire Donald Trump. Several times, speakers at the convention mentioned the increased media attention the party has gotten in the past several days, and on Twitter, the party’s account said:


Fellow Libertarians, we are at the center of the political universe. #LegalizeFreedom


"We have an impressive lineup of Libertarian candidates running across the country, from local office to president," says Nicholas Sarwark, the Libertarian National Committee chair, in a statement. "The major parties offer Americans more government. Libertarians advocate for much less government, the key to real, sustainable job creation; personal freedom; and a peaceful, non-interventionist foreign policy."

Several candidates, including Austin Petersen and John McAfee, are challenging Johnson, who was also the party’s 2012 nominee.

At the Rosen Centre Hotel last Friday, the party’s 985 delegates trickled in slowly as party leaders hotly debated convention bylaws and rules of order. California delegate Jacque Donahue says she definitely sees this election as a shining moment for Libertarians. People are being turned off by Trump’s bombastic talking points and Clinton’s closeness with the corporate world.

Starchild, a delegate from California, came wearing only underwear, fancy sunglasses and a transparent rain poncho marked with the handwritten words “DEMAND TRANSPARENCY” on the back. Starchild also agrees that the 2016 election is a special moment for Libertarians and people who want to pick their president from more than just two options.


"I tell them it’s time to Dump Clump," he says. "Dump both Hillary Clinton and Donald Trump."