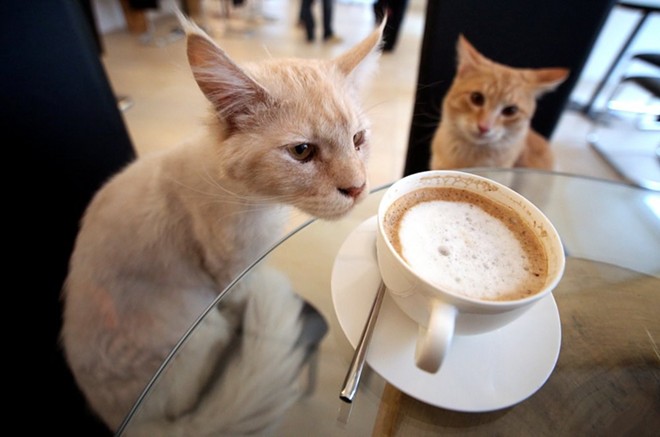 Look, we appreciate even the possibility of a cat café, whether it's in Clermont or right downtown near Lake Eola. But as the months tick by it's starting to feel like it will never happen, and every email or Facebook update we get ratchets up the anticipation another notch. On the other hand, cat lovers wanna know what's up. So here are the latest updates:

The Orlando Cat Café, which plans to open in Clermont (yes, it's confusing) is still waiting for their plans to be approved by the Lake County Building Department. Since our first post about them back in August 2015, they've adjusted their projected open date to "late spring/early summer 2016." One of their rescue cat mascots is advising patience. We are trying, Jean-Luc.

Meanwhile, the Kitty Beautiful, proposed to open at 223 N. Magnolia Ave., has also been keeping in touch. The prospective café is owned by Heather and David Strauss, whose Orlando Organics company has been a Good Thing in Orlando since 2002; they plan to hire employees on the autism spectrum, to "give people with autism a place to learn new skills, to have steady employment, and to be a big part of the community"; plus, CATS. A room full of cats to play with, cats that you don't have to feed, protect your upholstery from, or clean up after.

But despite all these enticing promises – they're even planning "Mewvie Nights"! – they are still in the fundraising stage, which means it may be a long while before anyone can actually enjoy a coffee and a cat away from home. By all means, cat lovers, go to their GoFundMe and help them out. We'll just be over here, counting the days.