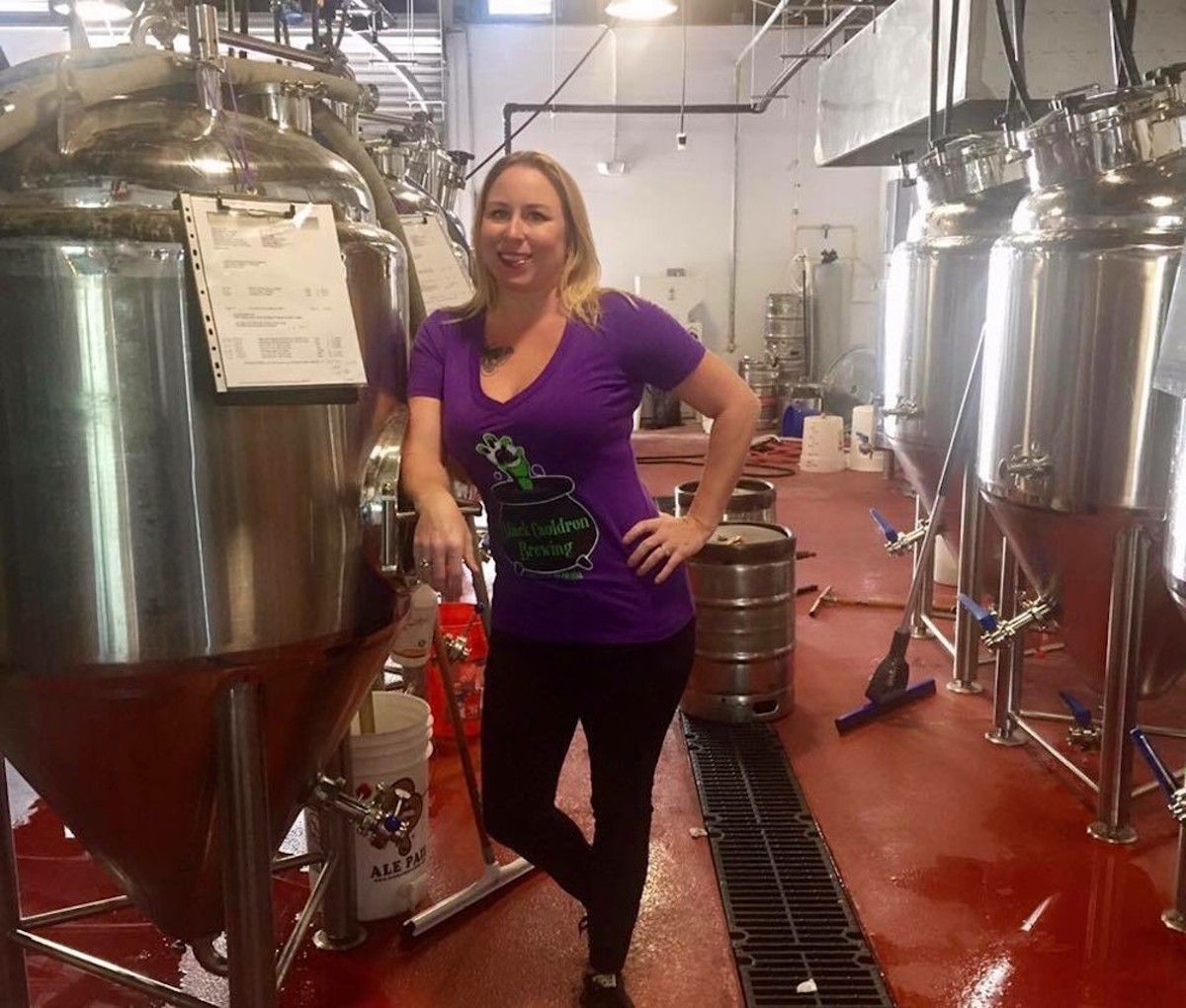 Anything you can brew she can brew better

Is the craft beer industry – which, today, accounts for 23 percent of the more than $111 billion U.S. beer market, according to the Brewers Association – a boys' club?

No surprise: The short answer to that question is yes. In fact, a study by Auburn University found that women make up just 29 percent of brewery employees nationwide. Meanwhile, further up the suds-making hierarchy, only 4 percent of women work as head brewers in an industry that, in its original form, was spearheaded by women.

In ancient Egypt, women were almost solely in charge of beer production and sales. And somewhat more recently, when what would later become the United States was initially colonized, women worked as the primary brewers.

In other words, this wasn't a so-called man's world until roughly 150 years ago.

Taking back the inherently feminine tradition, however, are local women brewers like Jeanna Malines, head brewer and co-owner of Black Cauldron Brewing in Parramore.

Malines says she and her husband took up home brewing when they first met in 2010. Like most beginner brewers, their first operation took shape in their garage.

But as it turned out, Malines was in the right spot at the right time, when Central Florida's brew scene began to rapidly expand around 2014.

The same, however, can't be said of local women in brewing.

"By and large, we're definitely a minority," says Sarah Nich, a brewer at Wop's Hops Brewing in Sanford. "If you go to some cities that already have more established brewing communities, you're going to find more women there. ... But Florida's already probably around 15 years behind the rest of the beer scene in the U.S."

Nich notes, though, that since she began brewing early last year, she's noticed a growing amount of women coming forward to learn the trade, becoming assistant brewers. By her estimation, the female brewer population in Orlando has tripled in almost two years.

The formation of Florida chapters by national organizations, such as the Pink Boots Society, the nation's largest women in beer group, have played a part in the slow-growing demographic shift. According to the Pink Boots website, their mission is "to assist, inspire and encourage women beer industry professionals to advance their careers through education."

The Pink Boots Society isn't alone. On the local level, female-oriented beer social clubs around town include groups like Girls Pint Out, an "all-female organization that promotes solidarity between beer drinkers of the fairer sex," according to the group's website.

Erika Chavez, the Pink Boots Society's Florida chapter leader, calls the group a "celebration of women" in the beer-brewing industry.

"We try to give as much education as possible to the women in this industry, to empower them, and to give them the best chance they can to be successful," Chavez says. "We try to meet as much as possible, and during those meetings we always want to have an education component."

Chavez adds: "So it's about having women talk about what they're doing, and how we can share as much knowledge with each other about what we're doing in our respective breweries, to make sure everybody is having new conversations."

Part of the difference in the numbers of women and men working in brewing could be traced back to socialization. According to a survey by the Brewers Association, women consume just 25 percent of all craft beer in the country. That could mean fewer women develop a palate for heavier traditional brews, like stouts, sours or barleywines, which Malines prefers.

"I've never had an issue with members of the brewing community welcoming women in," Nich says. "It's been the consumer that's given us more of an issue. I blame that on macro beer mass marketing. It's always been marketed towards men, and the population really isn't in the right mindset to accept women as the people making their beer."

She qualifies that: "Currently. But the industry can never hurt from having more diversity, whether that's gender or race or any kind of orientation."

The righteous sexiness of breaking down gender barriers aside, Malines says the brewing industry isn't as fun-filled as some folks might assume.

"Yeah, it looks glamorous," Malines says, laughing. "But really you're just a janitor. You're a janitor covered in beer, rarely drinking."

For those interested in learning the art of turning hops and grains into a drinkable buzz, Malines recommends joining a home brew club, as she did.

"The best thing to do, honestly, if there's any women out there that want to get into the brewing industry, is to just start talking to other women that are in it, find out who's looking for help. It varies from brewery to brewery to brewery, but a lot of times breweries are looking for an extra pair of hands on a brew day," Malines says.

After all, that's how the ancient Egyptian women learned – elbow to elbow.